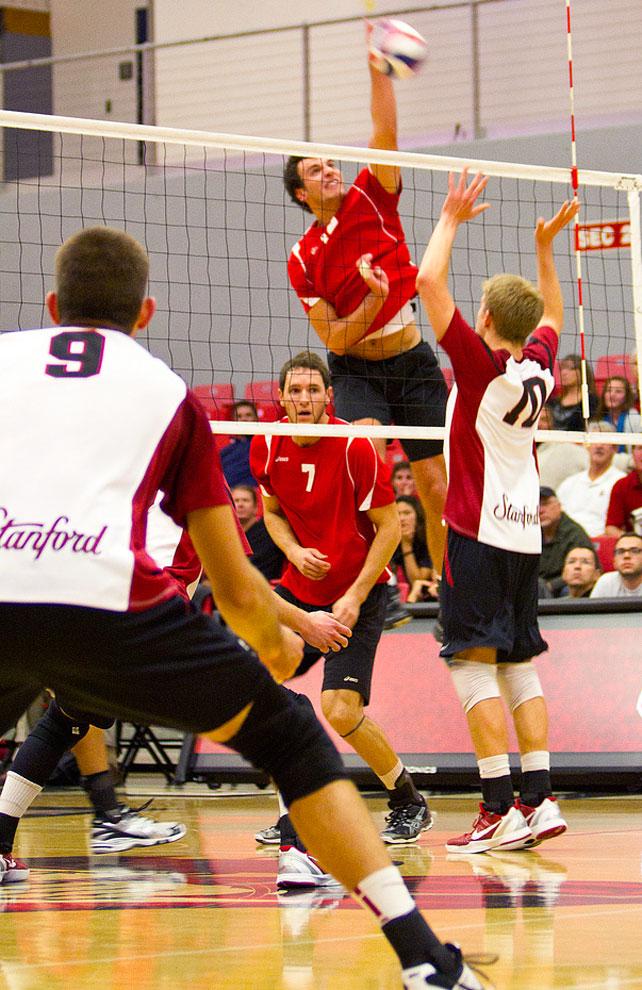 Opposite Julius Höefer goes for a kill vs. Stanford on Feb. 11. He did not play in the Matadors' loss to UC Irvine Wednesday night.

The loss marks CSUN’s sixth road loss in as many attempts and ends its three-game road trip, only winning one set in the three matches.

The Matadors (4-9, 2-7 MPSF) kept close the later sets after only managing 15 points in the first. The 22 and 23-point performances in the second and third set kept them in the game but were not enough for Northridge to take its first road win of the season.

The Matadors didn’t hit as poorly as they have been on the road managing a .244 hitting percentage compared to the Anteaters stellar .458 percentage. The match was the first between the two so far this year.

The Anteaters were led by the outstanding duo of senior opposite Carson Clark and junior outside hitter Kevin Tillie. The two combined for 29 kills on 50 swings, making up for more than half of the UCI kills on the night. The next closest Anteater, sophomore outside hitter Jeremy Dejno, added seven kills.

The absence of CSUN’s leading offensive threat, Julius Höefer, and his team leading 3.43 kills per set might have had an effect on the outcome, but the Matadors’ five players with six-plus kills was a different look for CSUN. The numbers may have filled his void but the presence of the freshman opposite will have to be there for Northridge in the future.

Next the Matadors will play their last road game at UC San Diego before starting their season-long, nine-game home stretch.

The Tritons (3-11, 1-8) currently reside in last place with their lone conference win coming against Hawaii back on Jan. 6. Friday’s match will be the first meeting between the two conference foes this year.

UCSD, as a team, hit .197 and are led by junior outside hitter Carl Eberts and sophomore outside hitter Vaun Lennon with 154 and 152 kills, respectively.

In their last match against Stanford, the Tritons hit a measly .139 but managed to extend the game to four sets behind Lennon’s 16 kills on 31 swings before falling to the Cardinal attack. The Tritons committed nine service errors en route to their loss.