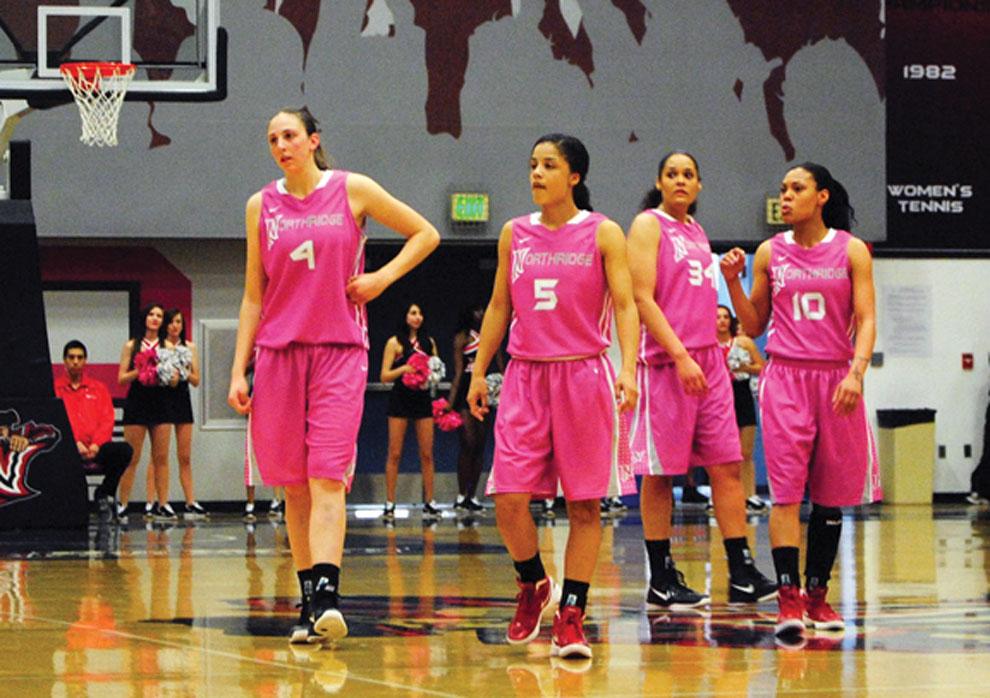 It has been a long journey for the Matadors this season. With 26 games now behind them, three still remain. After two wins in a three-game homestand, CSUN hits the road one more time as it looks to even up the series with UC Santa Barbara today and takes the series to Cal Poly Saturday.

“We lost to (Santa Barbara) in double-overtime, so we really want to win,” center Camille Mahlknecht said. “Cal Poly is in second place right now, so the game on Saturday will be huge. Hopefully we can keep playing as a team and keep winning.”

The last meeting between Northridge and UCSB was a nail biter, with the Gauchos taking the game 71-67 in a double-overtime Jan. 21. Santa Barbara’s six 3-pointers eventually gave them the edge they needed to beat the Matadors.

“They have a couple great shooters so it was crucial that we got out on them,” Mahlknecht said. “At some points of the game we didn’t, and we just needed to execute defensively better. I’m sure on Thursday we can take care of it and get the win.”

Though shots from behind the arc have kept opponents close, CSUN still continues to play decent defense from the perimeter. In the last three games, the Matadors have forced their opponents to shoot a combined 33.8 percent from 3-point range.

On the other hand, Northridge hasn’t had to rely on 3-pointers to stay in the game. The team’s presence in the key has been the source of CSUN’s scoring, with Mahlknecht and center Jasmine Erving leading the way.

“You get paint presence in different ways,” head coach Jason Flowers said. “We have to find a way in both games to establish ourselves in the paint. Whether it’s our post players posting up or our guards penetrating, there’s no secret. We want to play inside-out. It’ll be crucial in both games this week.”

Paint presence has been evident in the last three games for the Matadors. In their game against UC Davis, 57.1 percent of CSUN’s points came from inside the paint. And against Long Beach State, 52.8 percent of their points were from the key.

The Gauchos are coming off a road loss to UC Irvine Saturday, in which the Anteaters snapped a three-game winning streak for Santa Barbara.

The Matadors need to be cautious of guard Kelsey Adrian, who scored 17 points, with nine points coming from downtown. Adrian was also aggressive on the glass, collecting eight rebounds.
Most Improved Team

Unlike Flowers’ first season, in which the team finished with an overall record of 4-26, this year has been a great turnaround for the team. With their current record at 16-10, the Matadors have the best turnaround record in NCAA Division I women’s basketball with +12. Flowers attributes the turnaround to his players and coaches.

“It’s a program deal,” he said. “And the reality is we had a lot of room for improvement. So obviously we’re pleased that we’ve been able to come out and improve so much in a short time. It’s a byproduct of a lot of different people putting in a lot of hard work.”

Guard Ashlee Guay has seen the progress the team has made throughout this season and expects the team to go far.

“It’s been a growing season, I would say,” Guay said. “Since the beginning, we’ve adapted well and starting to do what we’re supposed to do and staying focused on our goal. I think we’re just continuing to do well and working hard and that’s why we’re so successful.”