Men’s basketball: Matadors don’t give themselves chance in last-gasp play, lose to UCR on Senior Night 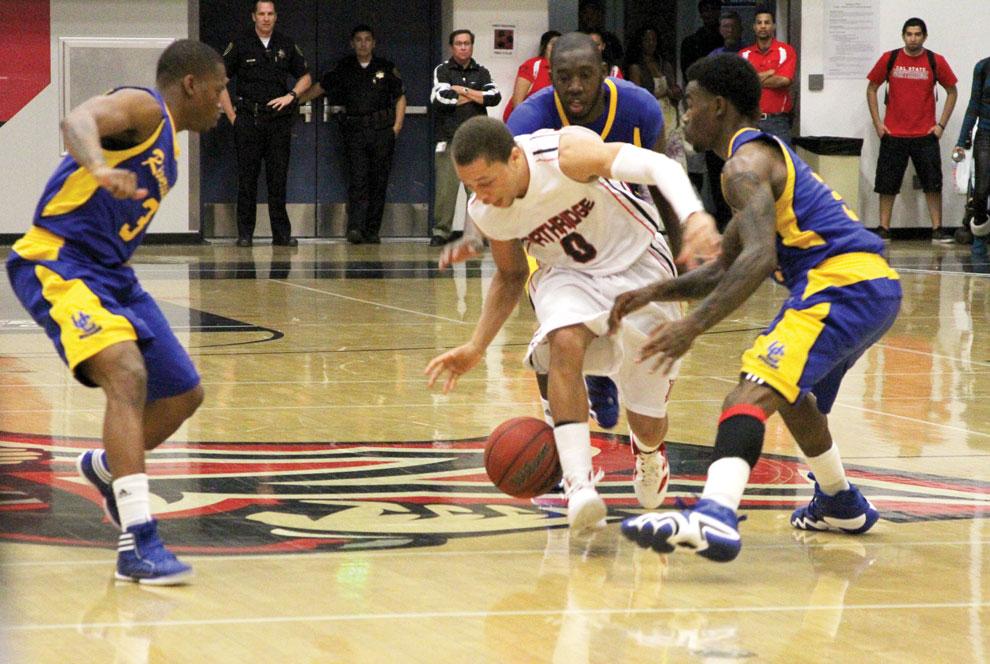 CSUN guard Josh Greene, middle, loses the ball moments before the final buzzer of his team's 63-61 loss to UC Riverside Wednesday night. The match was the last home game of the season for the Matadors. Photo Credit: Tessie Navarro / Multimedia Editor

Down two points with 4.3 seconds to go Wednesday night, CSUN head coach Bobby Braswell drew up a play for guard Josh Greene to be the hero who would send his senior teammates off with a win in their last home game of their careers.

Greene, who coming into the game had scored 20 or more points in four of the Matadors’ last five games, got the ball on his own end of the court and dribbled as fast as he could towards the UC Riverside basket.

He also dribbled right into three Highlanders who engulfed him and made him lose the ball as the final horn went off.

“Well, that was not the play,” Braswell said after his team’s 63-61 loss to UC Riverside on Senior Night.

Greene fell to the floor before the astounded “ohh’s” of the Matadome. Senior guard Vinnie McGhee threw his mouthpiece at the wall in frustration. The loss ensured Braswell would have a career-low for wins in a season.

Obviously, Greene’s game-ending turnover was not exactly what Braswell drew up as his final play. Greene was supposed to catch the inbound pass running towards halfcourt. Instead, the sophomore guard caught it running back to his own end of the court.

“I just tried to get the ball and make a play,” said Greene, who scored five points. “But I guess (UC Riverside) knew I was going to get the ball, so as soon as I got it, they all kind of collapsed on me.”

Braswell said it was a “teaching moment” for his young guard. But for the one that played his last game at the Matadome, McGhee, it was one of the most frustrating losses of his four-year career at CSUN (7-19, 3-11 Big West).

McGhee said it wasn’t the final play that upset him enough to get rid of his teeth protection, but the one before that. After a difficult Greene layup knotted the game up at 61-61 with 20 seconds to go, UC Riverside (13-15, 6-8) got its chance to go for the win. The play had been physical up to that point, but the officials called a hand-checking foul on McGhee with 4.3 seconds to go.

Robert Smith, who along with Phil Martin led his team with 14 points, made two freebies for the final margin.

“I felt like I did a good job,” said McGhee, who had six points, five rebounds and four assists. “But the refs bailed (Smith) out.”

Greene said: “you don’t call a call like that to end the game.”

It was an unfortunate turn of events for CSUN, which allowed UCR to make 13 of its first 17 second-half field goals but then turned up its defense and held the Highlanders without a basket for the last 5:43 of the game. UCR saw its 61-52 lead erased as CSUN forced six misses and five turnovers.

Having missed all of his 3-pointers in the second half, McGhee finally hit one with 1:32 to go to bring the Matadors within 61-59 before Greene tied it.

“Once I hit that one, I was just like, ‘man, I just want to get it again. If I get the open look I know I’m going to knock it down,’” McGhee said.

The look never came and McGhee and fellow seniors Ari Feldman (nine points), John Hayward-Mayhew (six) and Michael Lizarraga (four) had to say goodbye to their home crowd with a loss.

Braswell felt “disappointed” for his seniors and team, but said he was proud of their effort down the stretch. Even if the last play didn’t go exactly as planned.