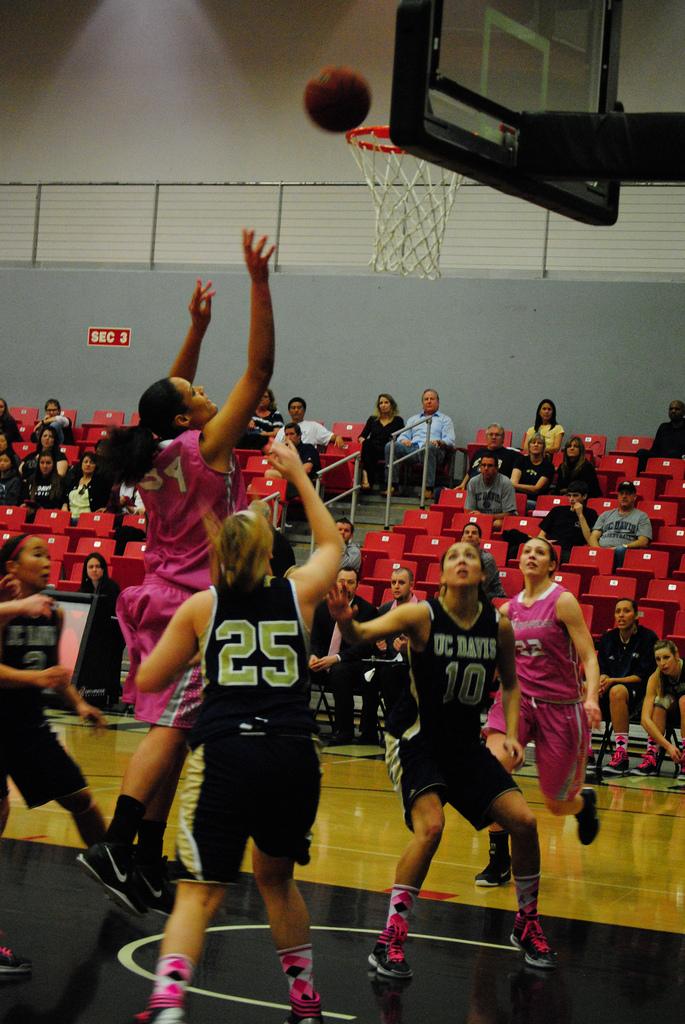 Center Jasmine Erving goes for a layup in a game against UC Davis on Feb. 18. Erving and the Matadors had an off-night, losing to UC Santa Barbara Thursday night. Photo Credit: Andres Aguila / Senior Photographer

CSUN is now in second place in the Big West Conference with this loss, while Cal Poly’s win over Long Beach State places the Mustangs (14-12, 10-3) half a game ahead of the Matadors. Now there are only two games remaining, including a pivotal game in San Luis Obispo.

“They came out and played well and we didn’t,” CSUN head coach Jason Flowers said. “They deserve the win. They shot the ball well and took care of the basketball. They played like they were ready to go.”

And sure enough, Santa Barbara was ready from the beginning. They shot a blistering 56.5 percent in the first half. They tapered off in the second period, but still finished the game with 51 percent.

An even more astonishing statistic is assist-to-field goal ratio. The Gauchos had 20 assists on 25 shots made, with guard Kelsey Adrian leading the way with six dimes.

Northridge was well aware of UCSB’s three-point capabilities, but failed to make stops from behind the arc. The Gauchos drained 8-of-15 shots from downtown, good for 24 points for the game.

“They do what they do. They just run their stuff,” Flowers said. “We didn’t do a good job guarding their set, but they got open even though we went over it throughout the week. We didn’t prepare them enough for what they were going against.”

Matador center Jasmine Erving, who has been consistent over the last three games, was on a slump, with only 13 points and six rebounds.

“(Erving) missed some shots, but her focus and will was there,” Flowers said.

Turnovers weren’t an issue for the Matadors, who only had four in the game, while UCSB had seven to its name.

Flowers and his team now have their eyes set on winning against Cal Poly.

“It’s going to take some heart. It’s going to come down to what team wants it the most. Period,” Flowers said. “At this point of the season, what’s on the line, you can throw the X’s and O’s out of it. It’s who’s motivated to get the job done.”