Women’s basketball: Shooting woes continue for the Matadors as they fall to Cal Poly 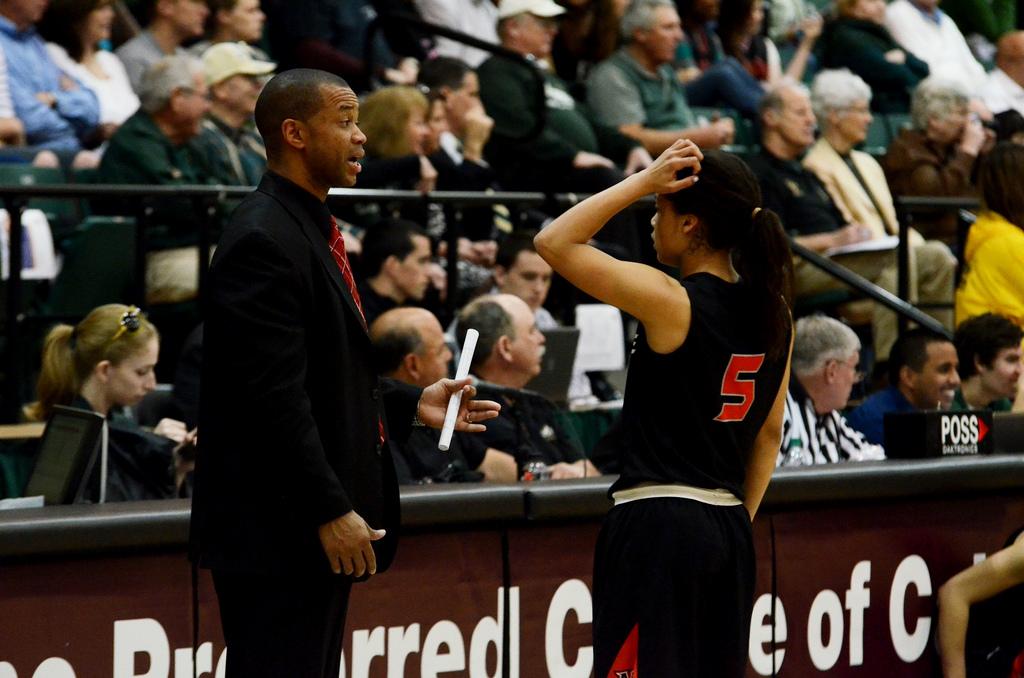 CSUN head coach Jason Flowers talks to guard Ashlee Guay about a foul she commited during their game against Cal Poly. Fouls were one of many areas where CSUN struggled in its loss to the Mustangs Saturday night. Photo Credit: Ken Scarboro / Editor in chief

SAN LUIS OBISPO – It was something that had not been seen from the Matadors since the beginning of the season: back-to-back double-digit losses. And with the Big West Conference season winding down, these losses couldn’t have come at a worse time.

Like any team, the Matadors looked to bounce back from a road loss, but it wasn’t the case Saturday night. With foul calls piled high and a low shooting percentage, Northridge fell to Cal Poly 70-56 at Mott Gym.

With this loss, Northridge still finds itself in second, one game behind the Mustangs. The only way for the Matadors to regain the top seed is to win their last game against Cal State Fullerton and for Cal Poly to lose its last two.

“I thought on Thursday, our effort wasn’t there for whatever reason,” CSUN head coach Jason Flowers said. “(Saturday), I thought our effort was pretty good. I thought we made too many mistakes and they made us pay.”

It was a continuation from Thursday’s game against the Gauchos as the Matadors struggled from the field, shooting a dismal 27.8 percent from the floor in the first half and finished shooting 30.8 percent. Center Jasmine Erving was nowhere to be found, with zero baskets to her name for the entire game.

“(Erving’s) performance or her point total or any of that wasn’t indicative of her effort,” said Flowers on the senior center’s performance. “I thought she played hard this afternoon and for whatever reason, there’s nights where you don’t make shots. Obviously, this was one of those days and unfortunately it was this game.”

The Matadors had a chance at coming back, as they mounted a 10-0 run in the second half cut the Mustangs’ lead to two (39-37), but a 9-0 run by Cal Poly pushed its lead back to 11 and Northridge couldn’t recover.

“In the second half, our kids showed the character they have all year,” Flowers said. “They fight back and we cut it to two at one point, but we gave them an offensive rebound and they hit a three.”

CSUN’s defense did a good job containing Mustang forward Kristina Santiago, who was 2-of-7 at the half, but every player for Cal Poly that took a shot in the half made a basket. Santiago eventually found her rhythm and finished the night with 16 points and 15 rebounds.

Fouls were an issue that night, as Northridge had nine fouls while the Mustangs only had three to their name at the end of the first period. But the Matadors finished with a staggering 19 fouls compared to Cal Poly’s nine.

“Playing hard is our expectation. It’s the expectation of the program,” Flowers said. “Now we have to get to a point where we’re not making those mistakes. There were some games where we made those mistakes during the season, and the ball went our way and we made plays down the stretch. Sometimes the lesson isn’t completely learned in victory. Hopefully this week has taught us those lessons that we’ve been trying to teach team throughout the year.”