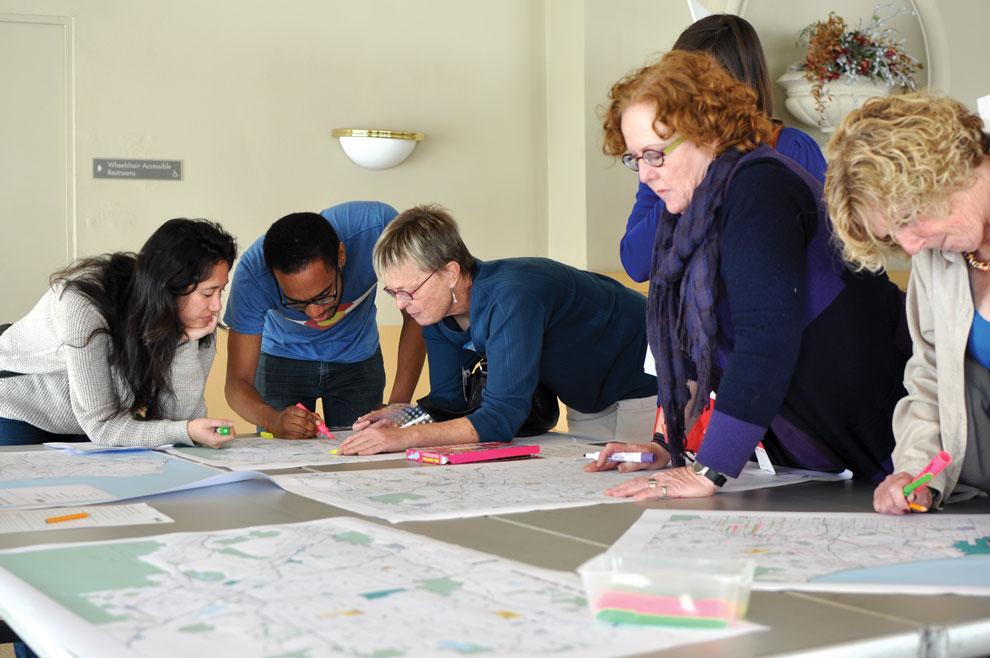 Participants in a mobility workshop held Saturday at LACMA highlight the streets they use for short trips, long trips, and their community's main street. The data will be compiled by the Los Angeles Department of City Planning to improve how Angelenos move around in the city / Agnes Constante

To improve mobility in the city, the Los Angeles Department of City Planning (LADCP) held workshops Saturday to obtain feedback from citizens who commute around the area.

Data presented at the workshops revealed that the majority of Angelenos get around by driving solo, accounting for 65.7 percent of drivers. A total of 11.2 percent of them commute via public transportation, and other methods of moving around include carpooling, walking and biking.

“We know how important it is to start changing our streets from single-purpose streets to actually accommodating bicycles, pedestrians, as well as transit,” said Claire Bowin, city planner for the LADCP.

At the workshops, which were held at Van Nuys City Hall and the Los Angeles County Museum of Art (LACMA), multiple stations were set up displaying information about the city’s transit system, demographics and street features that could make it easier for people to move around.

“The idea is to really just get LA moving more effectively,” said Bryan Eck, mobility planner for the LADCP.

Jessica Bremner, a resident in Silver Lake who commutes to Downtown LA for work, gets around via public transit.

“I am car-less, so I walk and take the bus and Metro every single day,” she said.

Bremner said some ways the city could enhance public transportation would be to add more bus lanes and more frequent service.

As a female, Bremner said she is concerned with the safety of bus stops and shelters. She would like them lit better, as she also commutes at night.

Echo Park resident Richard France found the workshop at LACMA nice because he was able to speak with people involved in the planning process, but is skeptical about the impact of citizens’ input.

“I think there needs to be a dose of reality in all of this. There are so many constraints that all your input is going to be for nothing if (the city doesn’t) have money,” he said.

This project is currently in its early stages, but the goal is to finalize plans by 2014, according to Eck.

Two other workshops concerning this matter will be held 9:30 a.m. to 11:30 a.m. at La Plaza de Cultura y Artes in Los Angeles, and 1:30 p.m. to 3:30 p.m. at the Pacoima Neighborhood Constituent Services Center. Both workshops will take place Saturday.