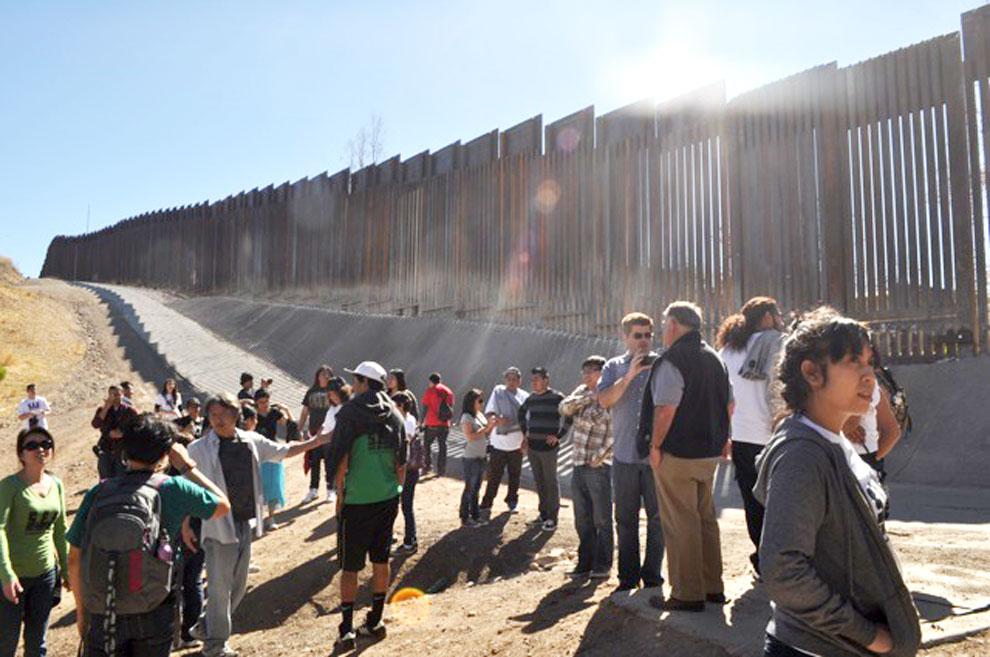 CSUN students stand at the Arizona/Mexico border minutes before being questioned by border patrol. The students traveled to Tucson, Arizona this past weekend to protest the banning of ethnic studies programs by the state. Photo by Daniel Mulato

Mexican-American Studies were once part of the K-12 curriculum, according to the Tucson Unified School District, but are now forbidden because of the implementation of House Bill 2281.

The bill, passed May of last year, prohibits any courses or classes which advocate ethnic solidarity instead of treatment of pupils as individuals, are designated primarily for pupils of a particular ethnic group, or promote the overthrow of the U.S. government or resentment toward a race.

“(Arizona) is targeting a specific group,” said Rudy Acuña, Chicana/o studies professor at CSUN. “The last time they targeted a specific group was with the Japanese-Americans when they put them in internment camps.”
As a result of this law, 11 TUSD Mexican-American studies teachers and two TUSD students have filed a lawsuit against Superintendent Tom Horne and the State Board of Education. The lawsuit contends that HB 2281 violates the teachers’ and students’ constitutional rights.

“Arizona is becoming the center of madness, in terms of Latino hate,” said Gerard Meraz, Chicana/o studies professor at CSUN. “We started taking students over there to see that experience. We try to educate our students about how they have to organize in those conditions.”

This is the third trip students have made to Arizona in the last two years. The first trip was to support then-congressional democratic candidate, Raul Grijalva. The second trip informed students of the recent enacted HB 2281 and the Senate Bill 1070, which worked to discourage and deter the unlawful entry and presence of aliens and economic activity by persons unlawfully present in the U.S.

Students were able to tour Tucson as well as the Arizona/Mexico border town, Nogales, with several of the TUSD litigants.

“It was an odd feeling being so close to something that has sparked so many debates,” said Daniel Mulato, 22, a senior double majoring in psychology and Chicana/o studies, about the Nogales border.
“It really hit me when I saw a baby shoe left right at the border. This could be someone’s little sister’s shoe,” he said.

A few minutes after standing at the border, the group of students were approached by border patrol and questioned about being there, Mulato said.

Students were also taken to a book depository, which now holds a variety of books related to Mexican-American Studies which were also found to be in violation of HB 2281.

According to a recent article in Tucson Citizen, some of the banned books include, “Pedagogy of the Oppressed” by Paulo Freire, “Rethinking Columbus: The Next 500 Years” by B. Bigelow and B. Peterson, Howard Zinn’s “Declarations of

The trip will contribute to a documentary in the making about the fight for ethnic studies. Gabriel Buelna, a Chicana/o studies professor at CSUN and executive producer of the documentary, sponsored the trip.

“Chicana/o studies and ethnic studies is to provide another way of looking at the planet or situation,” Meraz said. “We can’t just look at the world from one point of view. That’s very narrow and incorrect, factually and contextually.”