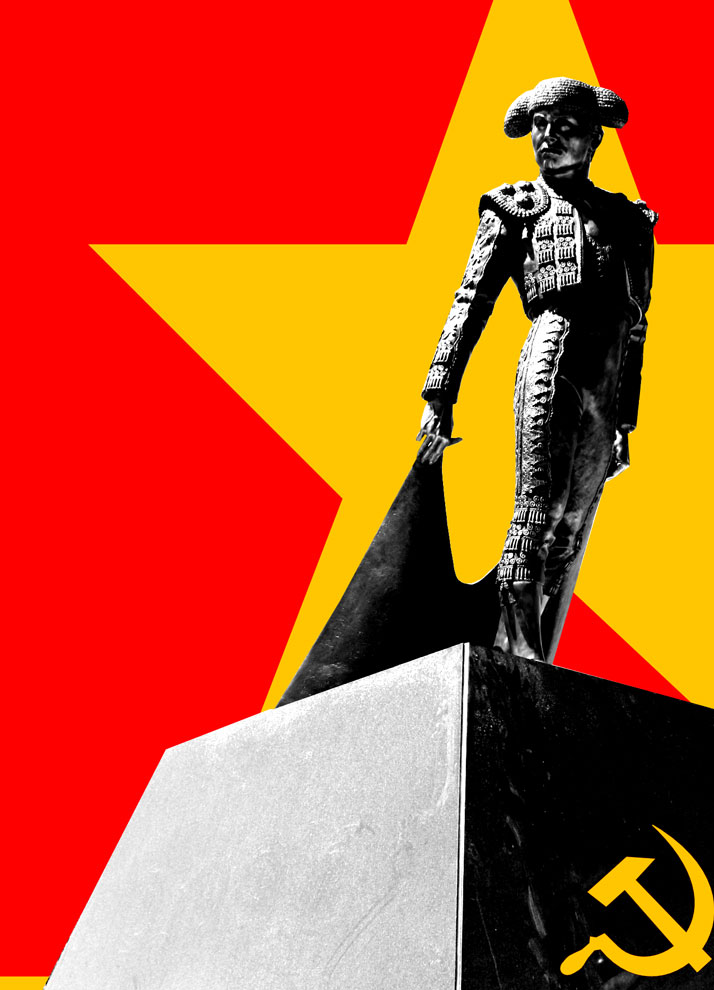 While high lifting the banner of International Proletarianism we do while heartily engaged in labors as shoulder to shoulder with you, Comrade McLauchlinovich must pull you into the aside! Staunch warning, Brother McLauchlinovich has for you!

Take heed, brothers and sisters! For enemy of Northridge University of California State Proletariat has infiltrated student-workers! Capitalist running-dogs and cossacks are among very rank and file of Great Northridge Collective! So brazen they are, that these oppressors of the masses proudly display their name for all to see! But Comrade McLauchlinovich warn you!

Enemy will be known by his name! Enemy is University of Spoiled Children! Enemy is USC!

While looking around campus of Northridge at torsos of students by the many, Comrade McLauchlinovich is dismayed to see T-shirts of “Trojans” in great and proliferate numbers!

Nose of Spoiled Children is looked down upon when gaze they fix on “mere public school” State University California student!

Heed warning of Worker-Brother McLauchlinovich! Some day in future none too distant, Spoiled Child will be working with you in building of office. Spoiled Child may appear to be Comrade! But cannily, claw his way up to middle management he will! Soon, parasitic exploiter of masses will be giving you orders! Sweat from your brow will he take credit for! Many the TPS reports you will prepare in his name! Nemesis of yours he will become! Your “Dwight from The Office” he will be!

For munificent benefit, however, of great student masses, bookstore of Northridge occasionally offer great and proletarian alternative to evil “USC” shirt. Offer is made to all comrades who will come forward! Exchange gear of Trojan labeling—or any other institution university of masses exploiting—for free similar gear bearing proud Northridge name of Matador!

Former evil exploitist clothing must be “gently used,” so that fruits of labor—and Fruit of the Loom—may then be passed to less fortunate comrades in shelter of homeless or store of Goodwill. Truly, in this, your duty to brothers and sisters is fulfilled doubly!

Alas, as gears of capitalism are oiled with blood of workers, kind bookstore of Northridge has no plans current to make offer at specific time near. Comrades! Rally to good bookstore of Northridge collective! Encourage proletarian brothers and sisters there to become, once again, true vanguards of the people! Lift high their spirits with encouragement and joy in their toils while buying “Scantron.” While at it, poke Associated Students in ribs and ask them for funding, as kind vanguards of duly and properly elected government of students have offered support of finances for program previous! Once again, the banner must be raised for the good of all!

Brother and sister workers! The call goes out! Cast off your chains! Rid your strong proletarian back of vestige of evil! “Trojans” no more to be emblazoned across your torso! Look at what Spoiled Children University has given unto world: Film students of great pretentiousness! Fraternities of Roofie! Simpson of O.J.! All bad!