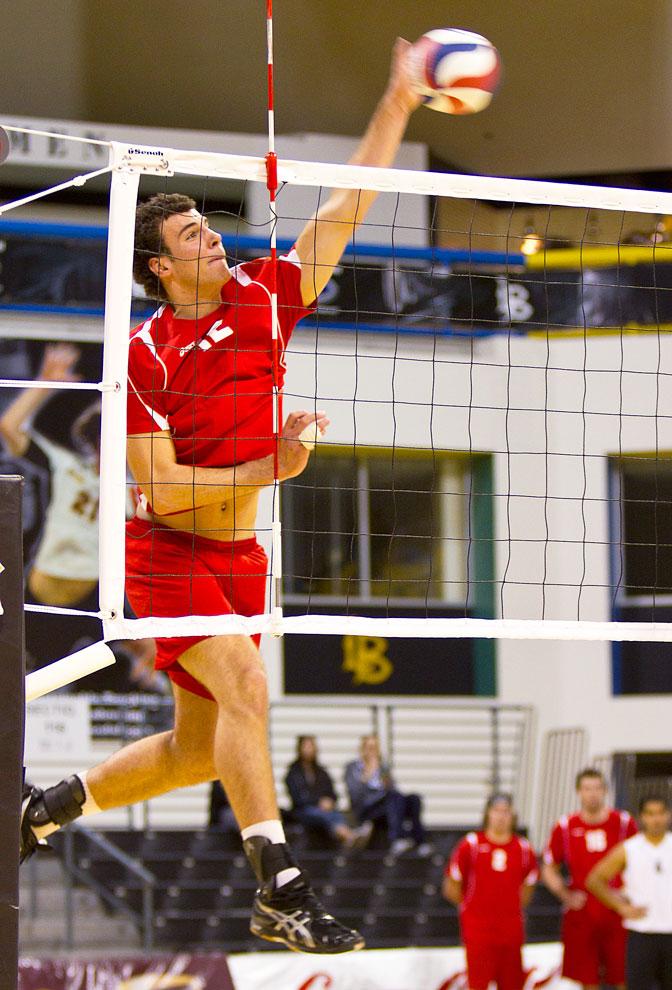 Matador Julius Höefer goes for a kill against LBSU. on Feb. 3. CSUN will look to beat UCSB for the first time in 2012 tonight. Photo Credit: Kat Russell / Senior Photographer

CSUN (5-9, 3-7 MPSF) is coming off its first road win of the season and begins a nine-game homestand with a visit from an impressive UC Santa Barbara team tonight.

“The (road win) was huge. It’s always good to win, especially in the MPSF,” said junior John Baker. “It’s always nice to get that road win, but it’s really nice to be home for nine matches.”

The teams have met twice before this year with both meetings resulting in losses for CSUN. The last one was a straight-sets loss at UCSB.

Head coach Jeff Campbell has constantly emphasized that hitting efficiently would be the key to success in all of the Matadors’ matches this season.

The road woes that have nagged the Matadors this year were in full effect in a Feb. 15 meeting with the Gauchos as Northridge hit a mere .200 on the day.

Although CSUN has seen its  struggles, stellar hitting earned  it its first road victory Friday at UC San Diego even as injured freshman standout Julius Höefer sat out.

“We’re glad to be back home,” Campbell said. “We certainly play better at home than we do on the road. Having played a good San Diego team on the road and winning was for sure good for us. We’re hoping to play better and that’s our goal.”

CSUN was without Höefer and his team-leading 151 total kills Friday, but Baker provided the necessary offense and even pitched in on the defensive end.

Baker led all Matadors with 11 kills on .500 hitting while assisting in four of the Matadors’ 15 blocks against UCSD.

“If I’m on the court I’m going to be that leader,” Baker said. “If I’m not, I’m going to do my best to put some kind of impact on the game.”

The junior now has 30 kills in 71 attempts on the year.

Sophomore outside hitter Brandon Lebrock also had a productive day on the offensive side adding eight kills and hitting .467 on 15 swings. Senior outside hitter Matt Stork added seven kills and six digs for Northridge.

The Matadors will face UCSB Wednesday in hopes of getting their first win over the Gauchos this season after only managing to win a single set in the previous matches.

Campbell is aware of their results against Santa Barbara in the past, but isn’t giving it too much thought heading into Wednesday’s match.

“We’re not going to key on what we did in the past,” Campbell said. “We’re going to try and work on being better. We have a little different lineup. We have a new setter and having that new setter certainly changes the offense.”

The UCSB offense is led by junior outsider hitter Miles Evans and his 201 kills. Gauchos junior middle blocker Dylan Davis leads the team with 48 blocks on the defensive end.

“They’re a frustrating team,” Baker said. “They’re pretty scrappy. They get on runs pretty well and they can beat any good team. I just hope we can get a lot of fans out there because we could definitely use that home-court advantage against them.”