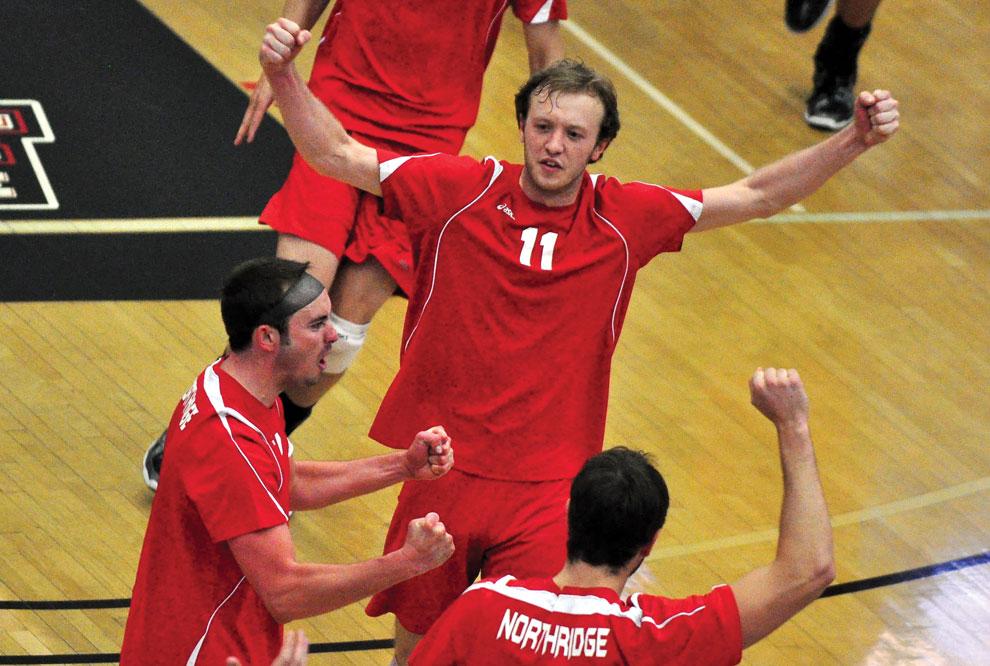 Matt Stork celebrates after his team's victory over the Gauchos Wednesday night at the Matadome. Stork had a game-high 20 kills. Photo Credit: Misael Virgen / Daily Sundial

There was no time to dive for it, so Stork digged it up with a kick.

“If I had to give a gameball tonight, it’d be to Matt Stork,” CSUN head coach Jeff Campbell said. “His effort was phenomenal. He played extremely well. He was a big reason we won tonight.”

Stork’s foot dig was one of the many highlights the senior had in the critical third set, which the Matadors won 30-28.  The outside hitter put down 11 of his 20 game kills in the frame, including the one that finally gave CSUN (6-9, 4-7 MPSF) the 2-1 edge heading into the fourth.

The Matadors were down by as many as five points in the set and still trailed 23-21 before consecutive mistakes by UCSB (5-10, 3-8) tied up the match. The game became a marathon-like battle that went into extra points and was won despite UCSB outhitting CSUN .400 to .357.

“It was definitely crucial. With momentum like that, you need to catch that game,” said Stork, who hit .308 for the night.

But it wasn’t Stork alone. Tired of losing to the Gauchos, outside hitter Brandon Lebrock and opposite John Baker rose to the occasion and chipped in 17 and 16 kills respectively.

After losing a fourth set in which they came out flat and only hit .083, the Matadors had Lebrock and Baker each blast down two kills in the fifth to take down the Gauchos with a 15-9 win.

Lebrock, who averages 1.55 kills per set, knew CSUN needed him to step up.

Stork said: “Having a couple subs (Lebrock and Baker) propel us to the win was very satisfying for me as a coach.”

What wasn’t satisfying for Campbell was the way in which his team started off the night. Fresh off its first road win of the season at UC San Diego Friday night, the Matadors looked shaky in the first frame and dug itself in a 6-0 hole. Behind six kills from LeBrock, the Matadors made it interesting and drew within 22-20 before UCSB scored three of the next four points to take the first-set win.

The second set was  a battle of runs in which CSUN prevailed. The Matadors got off to an 11-6 lead before the Gauchos responded with a 10-3 run to put themselves ahead 16-14. CSUN responded again, this time with a 6-2 run to retake an advantage it didn’t give up and set up the all-important third set.

Neither team put up impressive offensive numbers. The Matadors hit .224 for the night while the Gauchos hit .263

“Those aren’t great numbers by any means, but (Wednesday night), those were good enough to win,” Campbell said.

It was the usual 3-2 home win for the Matadors, who started a nine-game homestand. CSUN’s won all of its home games by that margin. Now No. 1 UCLA comes into town Friday night.

After a hard-fought win, Campbell said he’d let his team take it easy Thursday. Stork will surely appreciate that.

“It was just a tiring game,” he said.