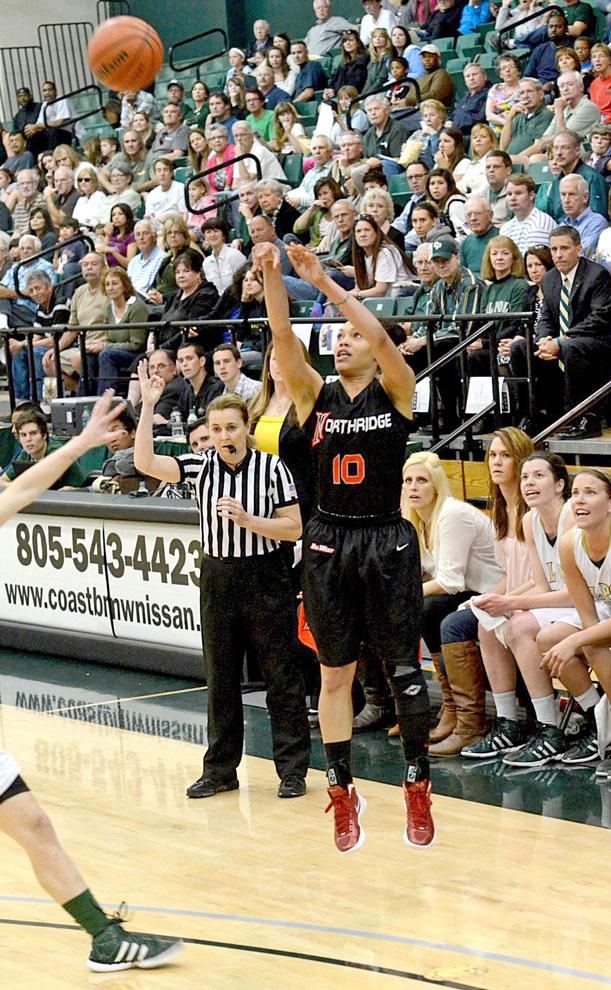 CSUN’s Big West Conference season is winding down to an end, and it’s hasn’t looked particularly pretty for the team after this past weekend.

“We struggled on defense. We weren’t getting to our spots and containing the ball,” guard Janae Sharpe said. “On offense, we weren’t playing the way we knew how to play. We were missing easy layups in the beginning, so that kind of hurt us.”

“It’s a huge game. We want to play really well for Jasmine (Erving) and Bridgette (Conejo),” center Camille Mahlknecht said about the final season game, which is also Senior Day. “And we finish conference strong so we go into the tournament on a positive note. So definitely beating Cal State Fullerton is the big focus for us right now.”

Before last week, the Matadors were alone in first place in the Big West after two-straight wins, but Northridge had a target on its back. Cal Poly has steamrolled its way to the end of the season, now riding a nine-game winning streak to attain first place in the league as CSUN is pushed down to second.

A win for the Matadors on Saturday would solidify their spot in second, though a loss would give UC Davis a very narrow chance of getting the second seed. The only way for Northridge to retake the No. 1 spot is if Cal Poly loses its last two games and CSUN wins Saturday.

It had almost been commonplace to see CSUN come back from behind and get a victory, but the last two losses were something that had not been seen since the beginning of the season during non-conference play.

“At this point of the season, any team is going to have a little bit of wear and tear,” Mahlknecht said. “As far as mental (fatigue) goes and for the most part physically, we are 100 percent committed. We really want to do well in the tournament and want to play the best we can. We’re not going to let anything like that affect us.”

Northridge won the last meeting against Cal State Fullerton in a 62-56 overtime battle at Titan Gym. CSUN center Jasmine Erving and guards Sharpe and Ashlee Guay had double-digit scoring that night, pouring in 14, 10 and 10 respectively. The game also included a dominant display from the Matadors on the glass, outrebounding Fullerton by 24 (47-23). But the factor that kept the Titans close in that game was turnovers, CSUN committed 30 that night, something the team would not forget.

“Our shots weren’t going in and our turnovers were horrible,” Sharpe said. “We just have to take care of the ball, rebound and play defense.”

The team has taken care of the ball, only turning the ball over four times against UC Santa Barbara and eight times against Cal Poly. Though their turnovers have improved, defensive pressure has taken a hit.

“It’s great that we’ve reduced our turnovers, but we just need to make sure that we’re intense on defense every possession,” Mahlknecht said. “Sometimes if one person breaks down, it could ruin the whole defensive sequence. We just need to focus on five people versus the ball, and then only giving one shot up, boxing out and getting the ball.”