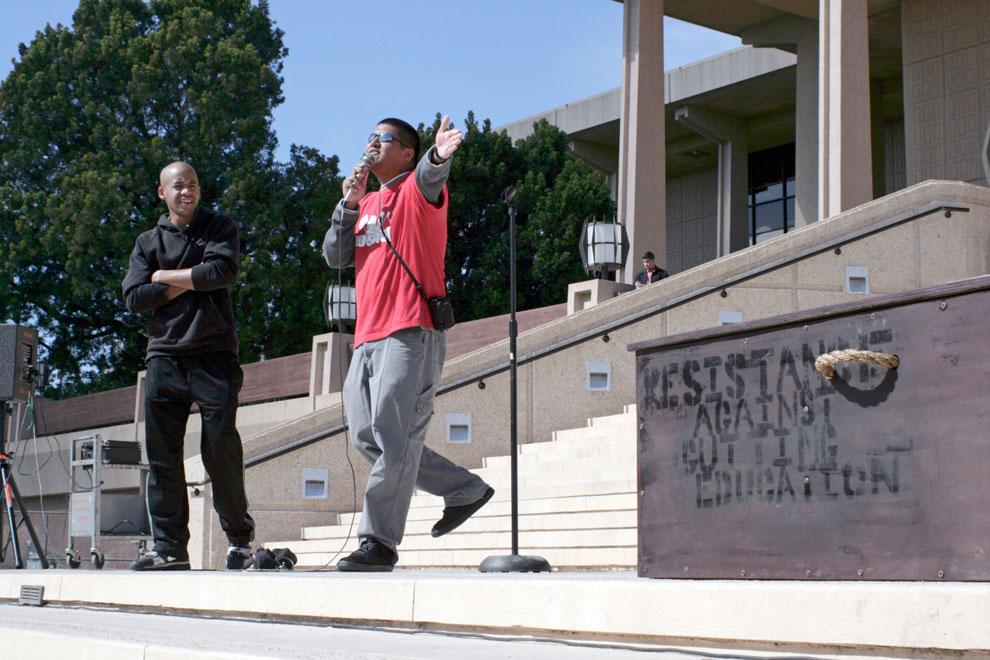 A crowd of about 300 students, faculty and other staff rallied in front of CSUN’s Oviatt Library to protest CSU budget cuts and tuition hikes, led by Pan African studies major, Justin Marks and members of Students for Quality Education at 12:30 p.m. Thursday, in conjunction with the National Day of Action to Defend Public Education.

Students and faculty addressed the crowd, raising concerns about the future of public higher education and encouraging more activism from CSUN students, and calling for the resignation of CSU Chancellor Charles Reed.

“When tuition fees are more than 50 percent of the cost of education, it’s not public education anymore,” Marks said.

Marks, a seasoned activist, was arrested along with four other students in March of 2010 while protesting budget cuts outside of CSUN and charged with failure to disperse. Those charge were dismissed in February.

“Chancellor Reed is bad for the CSU,” Marks said to the crowd. “That’s why we’re calling for his resignation.”

The rally was a planned demonstration according to William Watkins, CSUN’s acting administrator of academic affairs, who said it was a properly registered event. The demonstration was peaceful, and there was no need for any added security, according to Watkins, who was in attendance.

“I wanted to see what the students had to say,” Watkins said, later adding, “I appreciate the responsible way that students have been keeping these issues on the forefront of their agenda. Students are the most directly effected by the budget cuts. They should make their voice heard.”

“Education is a human right,” Sorrells said, and the crowd chanted it back.

“What is happening right now is that we’re in a crisis,” Acuña said. “You guys are going to be fighting this crisis for the next 10 years,” he added.

The rally lasted over an hour, at which point members of Students for Quality Education began hosting workshops on the lawn in front of the library to raise awareness about student activism in the CSU. There were six workshops, scheduled to last until 5:15.