Men’s volleyball: Matadors keep close but fall to No. 1 Bruins 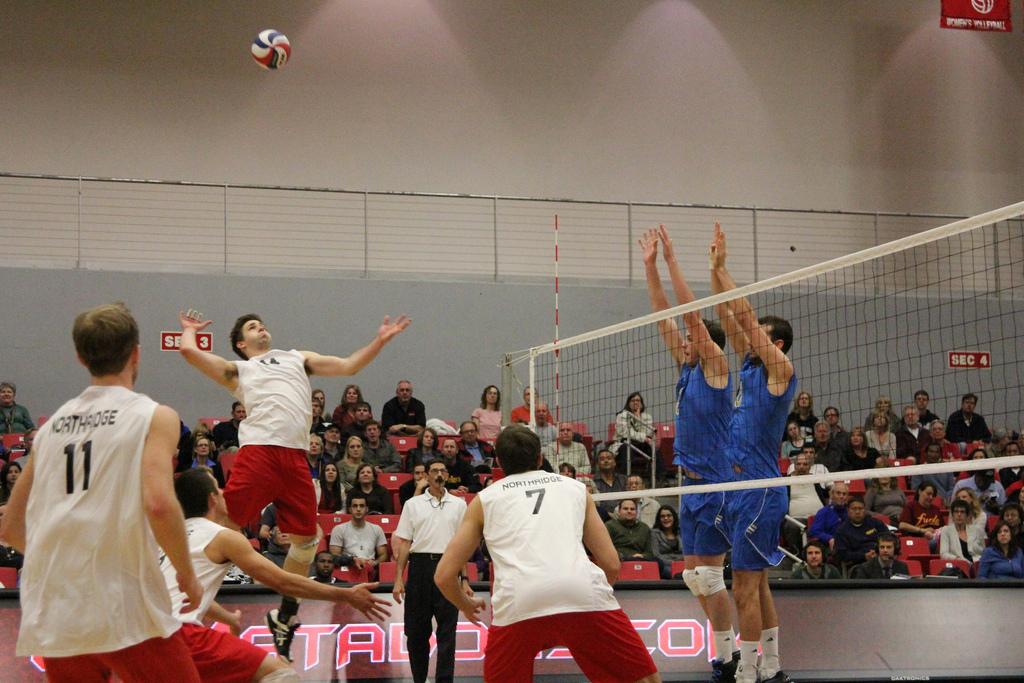 Matador opposite John Baker (14) goes for a kill in their game against UCLA Friday night. Baker, who has been filling in for injured teammate Julius Hoefer, and the Matadors could not contain the No. 1 Bruins. Photo Credit: Michael Cheng / Daily Sundial

The Matadors played tough against No. 1 UCLA early, but the Bruins’ (17-2, 11-1 MPSF) offense proved too much to handle for CSUN as it fell in straight sets at the Matadome.

“In the first set we were siding out,” said head coach Jeff Campbell. “In the second game we didn’t side out because we didn’t pass very well.”

The Matadors hit .134 Friday night while the Bruins countered that with a .293 hitting percentage.

The Matadors looked energized in the first half of the first set keeping within three points of the Bruins. CSUN evened up the set at 11 apiece but chose to take a timeout after going down 13-11.

CSUN stayed close throughout and evened up the match at 18-18 forcing UCLA into its first timeout. The Bruins slowly attempted to pull away, but the Matadors’ hitters managed to battle back evening the score again at 24-24.

The teams exchanged points before a Baker strike went long and ended the first set with the 28-26 UCLA advantage.

“We brought a lot of fire in that first set,” Baker said. “We had a couple of hitting errors but one or two plays in that whole set could have easily changed that game.”

The Bruins held the lead for the majority of the second set while their potent hitting overwhelmed the CSUN defense, hitting .387 in the set.

The Matadors offense looked like a completely different team in the second set, hitting for a miserable .031 after managing a .324 in the first.

CSUN again kept close in the third set but had to work to fight out of a deficit. Hoefer saw his first real playing time of the match in the third set and helped the lineup even the score at 13 apiece.

The Matadors again fell behind but stayed within striking distance before a Staker block tied up the third set at 19-19.

UCLA pulled away in the closing points of the match to complete the three-set sweep.

“I felt like we played hard,” Baker said. “It’s kind of like a morale buster when you’re so close to winning (the first set) and just let it slip away. We came out flat in the second and let that first affect us.”

Campbell knows UCLA is a good team and believes the Bruins played well, but is looking forward to the next seven games at home.

“We’re better today than we were last week,” Campbell said. “We’re getting better and that’s the key.”