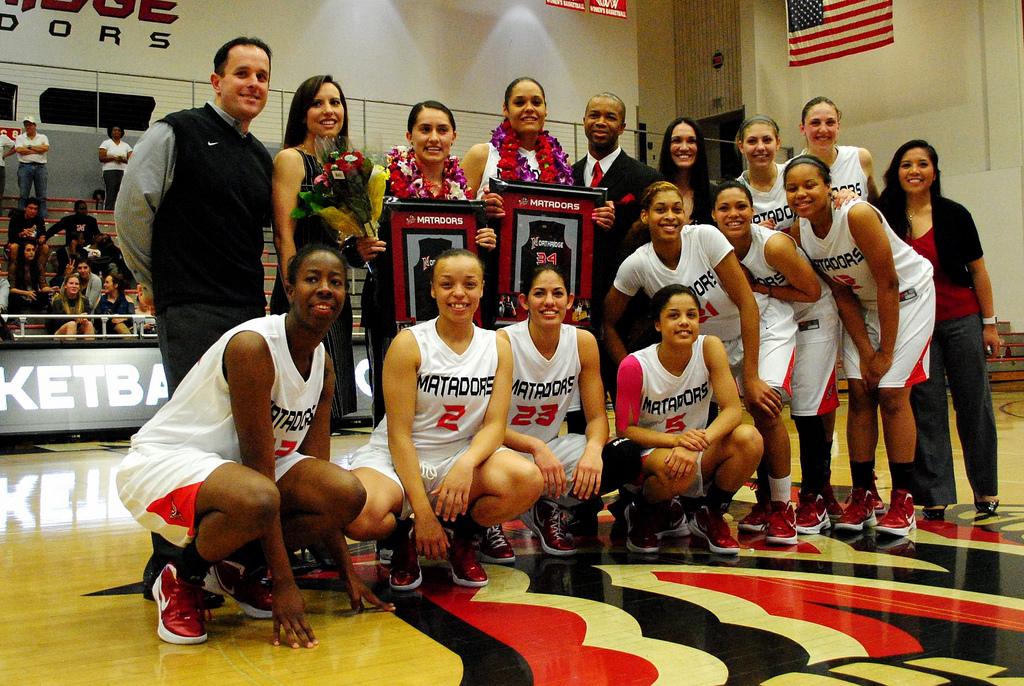 The Matadors celebrate their two graduating seniors, Bridgette Conejo and Jasmine Erving, after their victory against CSUF Saturday night at the Matadome. CSUN is now locked into second place for the Big West Tournament. Photo Credit: Andres Aguila / Senior Photographer

It was Senior Day for the Matadors as well as their last game of the season. After two losses on the road, CSUN had only one thing on its mind: winning.

And that’s exactly what they did.

With this win and a Cal Poly victory over Pacific the same night, the Matadors have locked in the second seed for the Big West Tournament and face Long Beach State Tuesday night at the Matadome.

It wasn’t senior center Jasmine Erving who led the team to victory, but one of Northridge’s freshman guards.

“I wanted to do it for the seniors. I wanted to win, of course, but I really wanted to win for them,” freshman guard Janae Sharpe said. “Everything I did today was for them and I hope it continues.”

Sharpe carried the team offensively, scoring 19 points from 8-of-17 shooting and collecting five rebounds. Erving, arguably, did just as much work, chipping in 12 points and nine rebounds.

“(Sharpe’s) performance was extremely great,” Erving said. “She came out. She played hard. She dove for loose balls. She got steals, rebounded and I was really proud of her. I look forward to seeing her in the upcoming years.”

There were times during the second half where it looked like CSUF was about to come back, but CSUN’s nature to attack on offense ensured the victory. Though the Matadors shot 21.4 percent from the field in the second period (compared to 53.6 in the first half), it was their presence at the line that kept them afloat.

“I think we weren’t as aggressive. At times, I think we were hesitant,” said CSUN head coach Jason Flowers on his team’s second-half performance. “(CSUF) started to switch defenses a little bit more in the second half. What we did do a better job of in the second half is getting the ball inside, whether it was penetration or getting the ball to (Erving) or get to the free throw line.”

Center Camille Mahlknecht made the only appearance at the line for the Matadors in the first half, but came up empty on both attempts. But the team flipped the switch in the second half and began to attack the basket consistently. CSUN made 17 of its 21 attempts in that period, and for six minutes, all the team could get were free throws.

“Your shots not always perfectly on, so one thing that we can control is our effort,” Erving said.

It took a while for the team to get going, but when the Matadors found their offensive rhythm, it looked like they couldn’t be stopped.

“Once we get our offense going, it’s hard to stop us,” Sharpe said. “We were getting some good shots, open looks, layup and got to the free throw line.”

But after trading baskets at the end of the first half and a buzzer-beater 3-pointer by Fullerton guard Megan Richardson, CSUN only had a three-point lead to end the first period (31-28).

CSUF had the hot-hand from three-point land, making five from behind the arc, but out of 21 shots. The Titans started off shooting particularly well, but the Matadors’ defense stepped up and forced the Titans to take difficult shots. Fullerton ended the game shooting 31.6 percent from the field.

“We came in at halftime and said ‘This is it. We have 20 minutes. We need to pull it together. We know we have what it takes, we just all need to be on the same page,’” Erving said. “I think we definitely executed that in the second half.”