Solicitors’s allowed to promote on campus 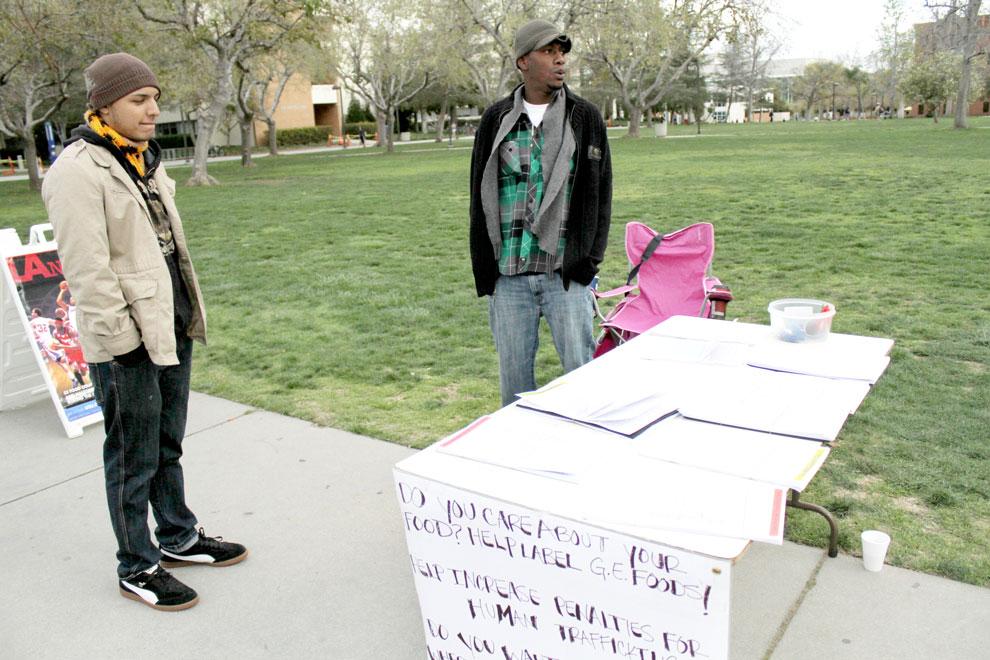 Jairo Gomez, 21, and Kevin Bookhart, 29, stand on Matador walk waiting for students to get out of class so they can talk to students about signing various petitions. Bookhart said they usually frequent places where "there's a nice flow of people." Tessie Navarro / Multimedia Editor

“No,” Rich, 22, almost whispers as he avoids eye contact and pretends to be looking for something. He is standing outside of Sierra Tower, and though he is holding a clipboard and has been standing here for hours asking students for signatures, he denies that he is a solicitor.

Rich, who wished to withhold his last name, is a solicitor on campus. He denied having been one when asked, for fear of being asked to leave the campus by an official.  However, Rich has never had trouble at CSUN, unlike any other place he has solicited anyways, he said.

“I’ve been spit on before for some petitions,” he said. “It was the legalizing marijuana petition, it really pissed people off.”

“I started doing this a year ago because I wanted marijuana to be legalized,” he said. “And then I just stayed. (I’ve) been doing this for about a year now and I like it, it’s cool.”

Having solicitors on campus has become a common sight at CSUN and other college campuses. Students walk out of class only to be bombarded with free movie screening tickets, religious flyers and more. Walks across campus can often be disrupted by solicitors who want signatures for petitions, donations and even subscriptions.

But what are CSUN students really signing?

Marcus, 24, who also wishes his last name to be refrained, explained the “Millionaire’s Tax,” petition that he was soliciting for on Matador Walkway one afternoon. “It’s basically a tax that wants to tax millionaires more because they make too much money,” he said. “It’s pretty cool. The money would then go to schools, from K-12.”

Marcus and Rich receive their clipboards and work orders from the United Petitions Network, a company that hires solicitors and hands them different petitions they wish to gather signatures for.

UPN gives their employees an “independent contract,” which does not direct them where to gather the signatures, explained Ryan Deonier, president of United Petitions Network.

Rich and Marcus choose to solicit at malls, outside of stores and on college campuses. When asked whether it is because students are more active and vocal about controversial issues, Marcus agreed.

“The students here are different, they ask more questions — not like other places, where people will sign just so we can leave them alone,” he said.

Some solicitors who stop by CSUN ask for donations rather than signatures.

Gerald Joseph of Ministry, an international partnership of people who help the needy, is among those who collect items and cash for charity. Joseph gives out information on housing for those without a home.

Students may be familiar with Joseph’s presence, and he can usually be found sitting outside between Sierra Hall and Sierra Tower.

Joseph solicits only at college campuses, and in addition to his time at CSUN, he can often be seen at UCLA.

He has had many experiences in college campuses, from receiving donations to spreading information on homes for the homeless. One experience in particular allowed him to really take part in helping a UCLA student find a home.

Joseph explained that he once directed a student to a temporary home. “He was living in the library, (which) is open 24 hours,” he said. “He would take showers at the gym and sleep in the library.”

Though he has never directed a CSUN student to a homeless shelter, he has had students volunteer to go to a nearby discount store to purchase toothbrushes and toothpastes for the homeless.

James Rios, business management major, has no problem with solicitors and has made an effort to help those in need.

“I signed with Green Peace during the spring semester for a monthly donation of $5,” he said.

But despite being urged by solicitors to continue their efforts, students do not always have the means to continue.

“(At) the end after my first payment, I called and cancelled my donation plan,” Rios said. “I’d rather donate one large amount not have to worry about interfering with my funds again.”

Solicitors are able to solicit on campus by making sure to sign the appropriate paperwork through the Matador Involvement Center, according to activities coordinator Agustine Garibay, who speaks with each organization that wishes to promote on campus. The MIC has various forms regarding posting procedures, policies on the distribution of literature and regulations on the solicitation of funds and commercially oriented activities.

When asked why he thinks solicitors choose to solicit on college campuses, particularly CSUN, Garibay responded that “we cannot speculate on the motivation and/or frequency of solicitors.”

Regardless of whether students ignore them or not, petitioners on campus will always find a way to attract signatures.

When asked if there was a petition in particular that had CSUN students roused, Marcus explained the responses he received when petitioning against a ban for lap dancing.

“All these guys were gathering around me, helping me out,” he said. “They were telling everyone to come over and sign. They were all like, ‘Hey, they’re trying to ban lap dancing! Come and sign!’”