Baseball: Matadors struggle on the road at SDSU Aztec Invitational 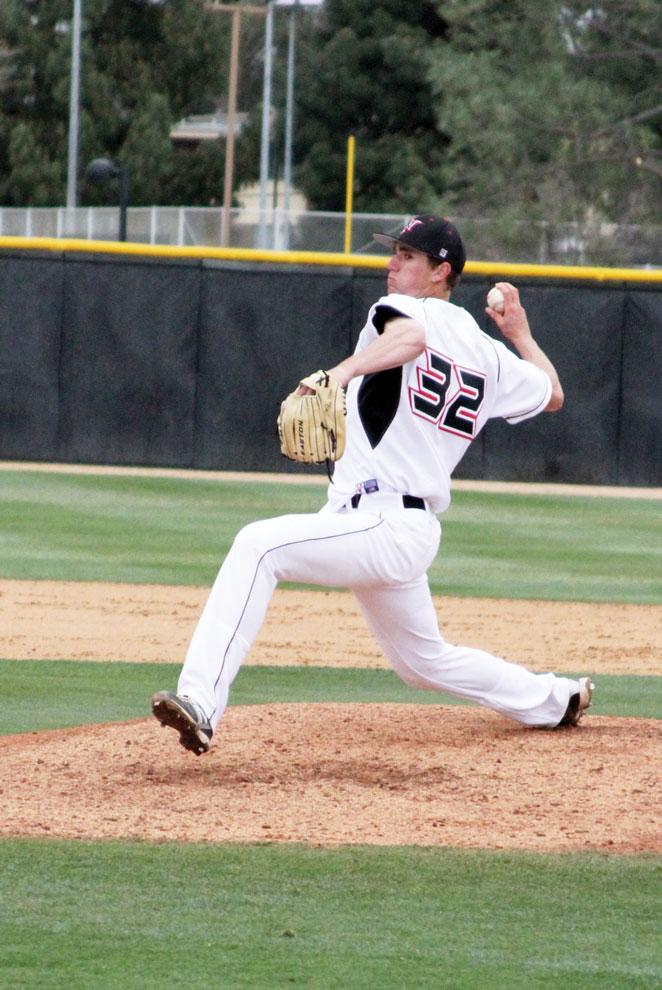 Matador pitcher Brandon Warner looks for a strike in their game against Washington. Pitching was their downside against SDSU Saturday. Photo Credit: Tessie Navarro / Multimedia Editor

CSUN hit the road to take part in the SDSU Aztec Invitational over the weekend and had mixed results, only managing to claim one victory.

Most teams that score nine runs in a game will come away with the victory but that wasn’t the case for Northridge Sunday.

CSUN (6-6) was able to gather nine hits against San Diego State (7-6) in their final game of the SDSU Aztec Invitational, but a late comeback attempt fell short in a 12-9 loss.

The Matadors offense battled back from two separate three-run deficits, but a six-run eighth by the Aztecs was too big of a hole for the CSUN bats to recover from.

Northridge was led by freshman Alex Mercado and designated hitter Adam Barry and their two hits while Miles Williams led all Matadors with three RBI via an eighth inning home run.

CSUN jumped to an early 1-0 lead in the first inning, but were held scoreless in the next three while the Aztecs jumped ahead in a three-run fourth inning.

Freshman Jerry Keel started on the mound for Northridge and allowed three runs on four hits after 4 1/3 innings of work. Keel also struck out three hitters but walked four of the 22 batters he faced.

The Matadors evened up the score in the fifth leading off with a Brett Balkan walk and a Mercado double down the left-field line.

A pair of sac flys to right by Kyle Attl and Nathan Ring scored Balkan and Mercado, evening the score at three apiece.

The Aztecs scored two in the sixth and another in the seventh before the Matadors evened the score again with a three-run eighth.

CSUN quickly put itself in a deficit after hitting a pair of batters and failing to get the out at first on a sac bunt by SDSU.

The Matadors came out swinging in the ninth with a pair of singles by Ring and Tommy Simis, but followed up with a fly out to right that failed to move runners over and a Marty Bowen strikeout. Williams blasted one over the right-field wall clearing the bases and bringing the Matadors within three with two outs in the final inning.

Cal Vogelsang and Balkan singled putting the tying run up to bat but Mercado grounded out to the shortstop to end the comeback threat.

The Matadors opened the tournament with a 4-3 win over San Diego University Thursday, led by the offensive outburst of catcher Steven Keller.

The senior blasted two home runs against the Toreros including the go-ahead run in the top of the seventh inning that sealed a game that had some brilliant performances by CSUN pitchers.

Keller only had one hit in limited playing time before his three-run homer in the fourth put the Matadors up 3-0.

Right-handed pitcher Jordan Johnson had an impressive outing on the mound pitching and a solid four innings allowing one run on four hits. The freshman had seen his struggles early on in the year giving up 10 runs in nine innings, but kept the Matadors close before senior Justen Gorski and freshman Louis Cohen closed out the game for CSUN.

Gorski earned the win allowing two runs in as many innings and Cohen earned his second save of the season pitching three innings of hitless baseball while fanning three batters.

Cohen has worked wonders for CSUN, coming out of the bullpen so far this year allowing a single hit in 6 2/3 innings and striking out eight.

Friday provided a pitchers’ duel early on as the Matadors took on San Francisco, but a four-run seventh by CSUN wasn’t enough to hold off a late push by the Dons and eventually fell in 10 innings, 6-5.

Senior Vincent Roberts started on the mound for CSUN and provided his longest outing of the year going four innings allowing three hits and a run.

Both team’s pitching staffs dueled early, but the Dons struck first after a throwing error by shortstop Kyle Attl allowed the lead-off hitter to get on base and eventually score to put San Francisco up 1-0.

The Dons added two more runs before CSUN could answer back with a run of its own in the bottom half of the sixth.

Northridge exploded for four runs in the seventh inning led by a Cal Vogelsang single that scored two.

Attl came up next and reached on a throwing error scoring Vogelsang before Bowen closed the inning with a single into left field scoring Attl and making the score 5-3 heading into the eighth.

Unfortunately for the Matadors, those would be the last runs of their evening as they slowly saw the Dons chip away and score a run in each of the next two innings forcing extra innings.

The Dons scored in the top of the 10th, but the Matadors were unable to put anything together during their at-bat and fell to San Francisco, 6-5.

On Saturday the Matadors’ were allowing hits early and often in a landslide 13-3 loss to the Toreros.

CSUN gave up two runs in five of the first seven innings on a day that the defense gave up 16 hits and committed two errors en route to its first back-to-back losses of the year.

The Matadors’ Alex Muren came into the game with a perfect 2-0 record and fresh out of his one-hit gem against Northwestern on Feb. 25.

Muren was rocked for 10 hits and nine runs, two unearned, in five innings of work. The junior also gave up his first home run of the season but struck out five on the day.

Sophomore Miles Williams led the CSUN lineup, tallying three of the Matadors’ eight hits. Northridge was able to put men on base but the inability to bring the runners around to score left CSUN with 14 runners on the base path.