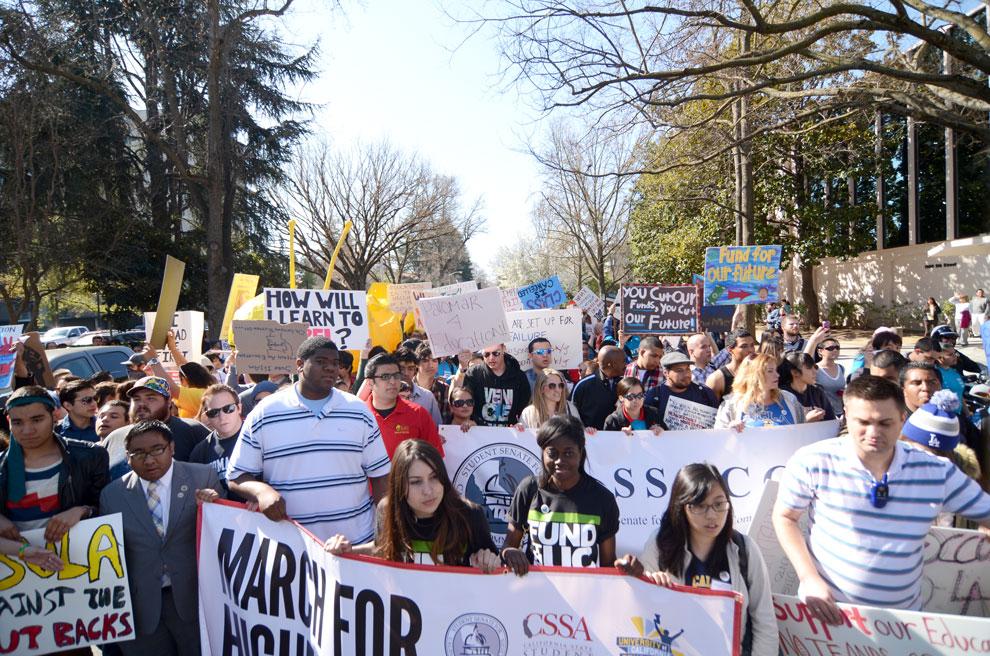 California students and supporters rallied in Sacramento Monday to protest the ongoing cuts in funding to higher education.

The protesters marched a mile from South Side Park to the steps of the Capitol building, holding signs and yelling various chants such as, “The students united will never be divided” and “if you see Brown, flush him down.”

According to the rally’s organizers, there were roughly 10,000 students at the protest, though police officers estimated about 5,000.

Student organizers were appointed as the rally’s “peace keepers” by the three organizations to keep the protesters in line to avoid confrontation with the police.

According to Dep. F.J. Archuleta of the CHP, there were “hundreds” of police officers at the protest on motorcycles, bicycles, horseback and standing by on foot in case the crowd got out of control.

Once a majority of the crowd had gathered at the Capitol steps, California State Student Association President Gregory Smith addressed the crowd, encouraging students to Tweet “#fundourfuturemarch” and “#supporthighered.”

The line-up of speakers included students and organization representatives alike, all of whom spoke about the importance of accessibility and affordability of higher education.

“I am sick and tired of media treating you the way they do,” said Van Jones, founder of the Ella Baker Center for Human Rights and former environmental advisor to Barack Obama. “You are not asking for charity. You are just asking for the same opportunity that my generation had. We’re not talking about charity, we’re talking about a return on investment.”

Several speakers and protesters also noted the role that budget cuts have had on students of color as well as the presence of ethnic studies in higher education.

“Low income students of color have been effected most by these cuts,” said Sydney Fang, public health major from UC Berkeley who spoke to the crowd. “But regardless of your background we have all been wounded.”

Johann Almeida, a legislative affairs representative from CSULA, engaged a crowd chanting “I thought this was America” before the march began.

“I immigrated from Brazil when I was 10. In other countries we hear so many great things about how America is the ‘land of opportunity’,” Almeida said. “Now I’m $22,000 in debt. I know the hope that America offered was a false hope. It was an illusion of opportunity.”

Quanah Brightman, 35, was at the rally representing United Native Americans, Inc. The organization was one of the first to promote ethnic studies in education, Brightman said.

Defunding ethnic studies programs is an issue that is larger than the tightening of the state budget, according to Brightman.

“Ethnic studies is being threatened and we’re here supporting it,” Quanah said. “But what we’re trying to do is decolonize people.”

Several politicians made appearances at the protest expressing their support for the students and offering solutions to the current education crisis.

“California is watching you and the people of our state agree with you,” said Speaker of the Assembly John Perez. “You’re sending a powerful message to my colleagues and I.”

Perez has proposed the Middle Class Scholarship, which he said will reduce the fees of the UC and CSU by to two-thirds, an estimated $8200 a year for UC students and $4000 a year for CSU students.

Sen. Darrell Steinberg spoke to students about Senate Bills 1052 and 1053, legislation he’s proposed to decrease the cost of college textbooks to $20 or less. Steinberg also encouraged students to take an active role in their community and the election process.

Lt. Gov. Gavin Newsom, also made an appearance, encouraging the protesters to keep making their voices heard and hold the California government accountable

“We’re here today to recognize this fundamental fact that a state with close to two million people unemployed, that you cannot have an economic development strategy without a workforce development strategy and that includes higher education,” Newsom said. “Education is growing at an unsustainable rate. We need to fix it, we can’t just talk about it.”

After the rally, students continued on to a sit-in protest of the Capitol building.