Past Farm Bill policies show change may not be possible 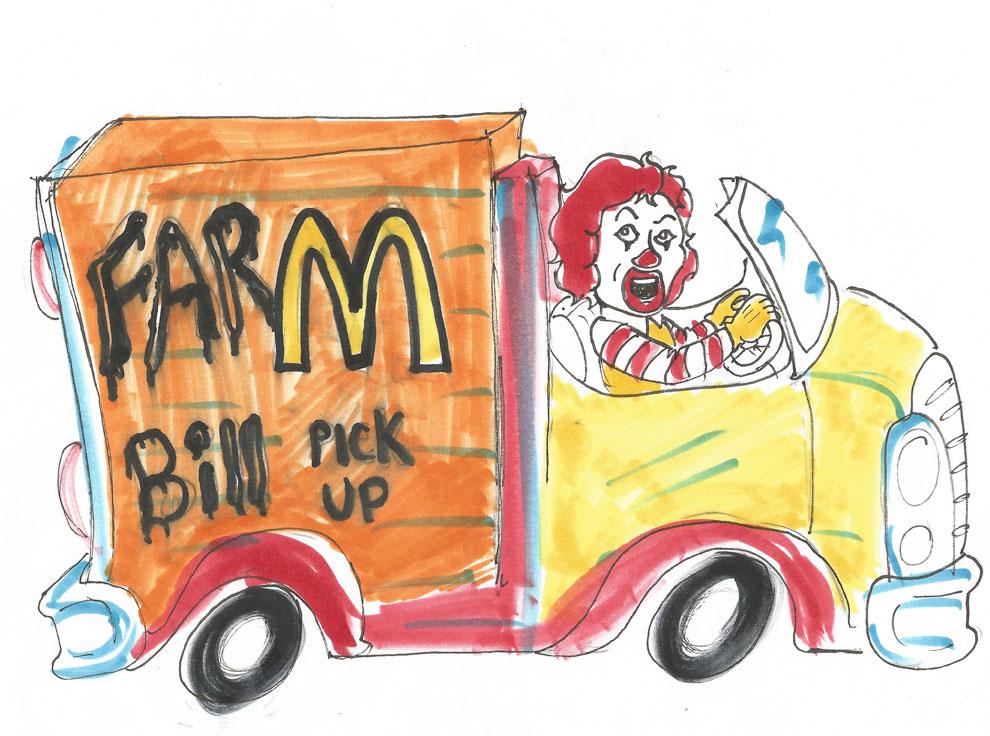 The fate of American food policy lies in the hands of Washington policy makers this fall. In September, the 2008 Farm Bill, officially known as the Food, Conservation and Energy Act of 2008, expires. The Farm Bill determines who sinks, who swims and what makes it to our plates, for better or for worse.

Every five years, the Senate, House Agricultural Committees and congressional super committees pass new legislation that determines the fate of U.S. food policy. It began in the wake of the Great Depression with the goal of supporting American farmers.

The legislation has a great impact on everyone in this country, not just farmers. According to the Institute for Agriculture and Trade Policy, over 40 million people benefit from food assistance and are directly affected by the bill.

Lawmakers’ past choices failed to address crucial concerns pertaining to health, sustainability and conservation. It’s integral that merging issues that address locally sourced foods and organic farming be discussed in the upcoming bill.

Current food policies support monocultures; an agricultural practice of growing a single crop over a large area. Corn and soy, the most subsidized monocultures, are pushed into the food supply in any possible form and function imaginable. Few are at all beneficial to public health.

For example, corn, one of the monoculture crops subsidized in the bill, is used to be processed into a variety of synthetic substances used abundantly in almost all foods found in the grocery store. Pick up a box of almost anything and read the nutritional information: dextrose, maltodextrin, high fructose corn syrup all come from corn and are made possible by the Farm Bill.

Michael Pollan, repeated best-selling author, professor of journalism at UC Berkley’s Graduate School and director of the Knight Program in Science and Environmental Journalism spoke with Nourishlife.org about the 2012 Farm Bill.

“All the work is going toward producing these so-called ‘commodity crops’ that are the building blocks of fast food,” Pollan said.

Myplate.gov breaks down the disturbing hierarchy of priorities. According to them, $33.1 billion is spent on commodity crops. The very same lineup that is sprayed the most and boasts a robust lineup of GMO heavyweights: corn, soybeans, cotton, rice and wheat. Contrast this with the meager $4.3 billion invested in the cultivation of “specialty crops.” These “specialty” items that get the funding they deserve: fruits, vegetables and nuts. Who needs those anyway?

“It is that key piece of legislation passing every five years. It isn’t a bill just for farmers; it really should be called the ‘Food Bill.’ It’s the rules for the food system we all eat by,” Pollan said.

Politicians aren’t going to stop favoring their “big ag” buddies to support organic and local-friendly farming measures. American culture is super-saturated with a backward logic. Walmarts, fast food, supersized everything! Dirt-cheap convenience comes with a cost: morbidity, the demise of independently operated business and agriculture and a twisted value system.

People are out of touch, there no longer is a frame of reference or moral compass in our food polices. Cows are meant to eat grass—yes, real grass—and maybe even walk around outside away from cesspools of waste. People eat food that grows from the ground; food that hasn’t been doused in toxic chemicals or with DNA that hasn’t been engineered to produce its own toxins.

The public is sedated to how far we’ve fallen. The term “organic” didn’t exist a couple generations back. Food was food; no bells and whistles. There wasn’t a culture war between “conventional” crops or “organic” produce. It all was food, grown from the ground. Plain and simple.

“Aiming at $23 billion in cuts, with around $14 billion coming from commodity subsidies, $6 billion from conservation programs and the rest from nutrition programs like food stamps, now more important than ever,” he said.

With the U.S. in recession and a budget crisis from both sides of the aisle, change in food policy looks grim. A perpetuation of greedy motions contributing to America’s obesity problem, farmers losing their properties, an empire of processed foods and genetically manipulated crops is on the menu. Unless politicians loosen their death grip on austerity measures, change will be slow to get traction.

But there are change agents in this fight. Food Democracy Now recently drafted a petition to influence how to help the Farm Bill better serve farmers, consumers and the environment, “I Want My Organic Farm Bill.” The petition calls for a $25 billion plan to shift farming production to ensure 75 percent of farms get U.S.D.A. certified organic by 2025; have all children eat organic at school lunch programs by 2020; pass “Beginning Farmer and Rancher Bill” to populate the land with a million new farmers by 2020 and enact a cutoff for government funding for land up to 1,000 acres to promote independent farming.

It’s a delicate time–a time to remain informed and vigilant. Keep tabs on what happens with the Farm Bill; it affects each and every one of us—children, family and friends. What ends up on our plates, our produce aisles, kids lunch menus at school. Decisions have lasting effects that reverberate for generations. Let’s hope the gang in Washington makes the right ones.