Women’s basketball: No. 2 Matadors host No. 7 Long Beach State in first round of Big West Tournament 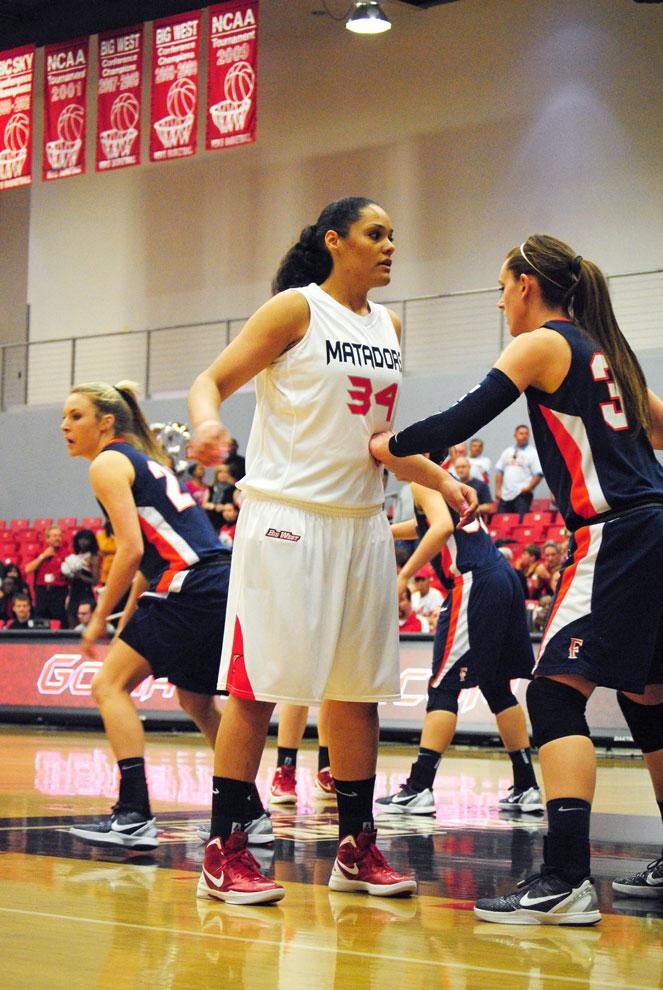 CSUN center Jasmine Erving (34) looks on during a Saturday game vs. Fullerton. The Matadors are the second seed of the Big West Tournament.

After a solid performance that got them a win against Cal State Fullerton to end the regular season Saturday, the Matadors secured the second seed in the Big West Tournament and will face Long Beach State tonight at the Matadome.

With only two years at the helm of this young Northridge team, head coach Jason Flowers managed to bring his squad to the quarterfinals of the Big West Tournament.

“Once you get into the postseason, everybody starts over right from the beginning, 0-0,” Flowers said. “We’re excited for the opportunity. We have to play good basketball. There’s no do-overs, no mulligans. Everything that we’ve worked for (this season), now’s the time to put it all together and go out and put your best foot forward and let the scoreboard take care of itself.”

The teams split the season series, with the Matadors winning at Long Beach while the 49ers grabbed their victory in a double-overtime showdown at the Matadome.

Free throws and rebound were the keys in the Matadors’ victory, but 3-pointers by LBSU have kept the 49ers in the game regardless of the result.

“We just have to come out and do the things we’re supposed to and control how the other team plays,” Flowers said. “We can’t control whether they’re shooting extremely well. The only thing that we can do is control the things that we have influence on, and that’s our effort, our focus, and from a basketball standpoint is defense, rebounding and taking care of the basketball.”

Having played Long Beach twice this season, CSUN already knows what to expect from the 49ers and all they can do is pay attention to the fine details of their game.

“These last two practices, we’ve been focused throughout the whole time, working together as a team and talking to each other,” guard Ashlee Guay said. “Energy has been up there, the coaches are pushing us and I think just the team, in general, is ready and prepared. We’ve done the hard work so we want to show it.”

Aside from the quarterfinals starting tonight, today was big day for the Matadors. The team received seven awards today, with Flowers being named Coach of the Year, guard Janae Sharpe as Freshman of the Year, forward Violet Alama as Co-Sixth Woman and center Jasmine Erving earning a spot on the All-Big West First Team. Alama and Guay received honorable mentions while Guay and Sharpe earned spots on the All-Freshman Team.

“Early in the season, (Erving) came and talked to me and said, ‘Listen. They’re predicting that you’re going to get first team all-conference and you’re going to get freshman of the year, so let’s put in the work and play hard make it happen,’ and I listened to her,” Sharpe said.

Alama gave credit to Flowers for making her work hard and preparing her for every game. Erving also gave praise to her coach, but also to her teammates.
“It just shows that our kids have bought in the team, and as me a coach, it’s rewarding to see that our kids get rewarded for giving up themselves for the better of our group,” Flowers said.