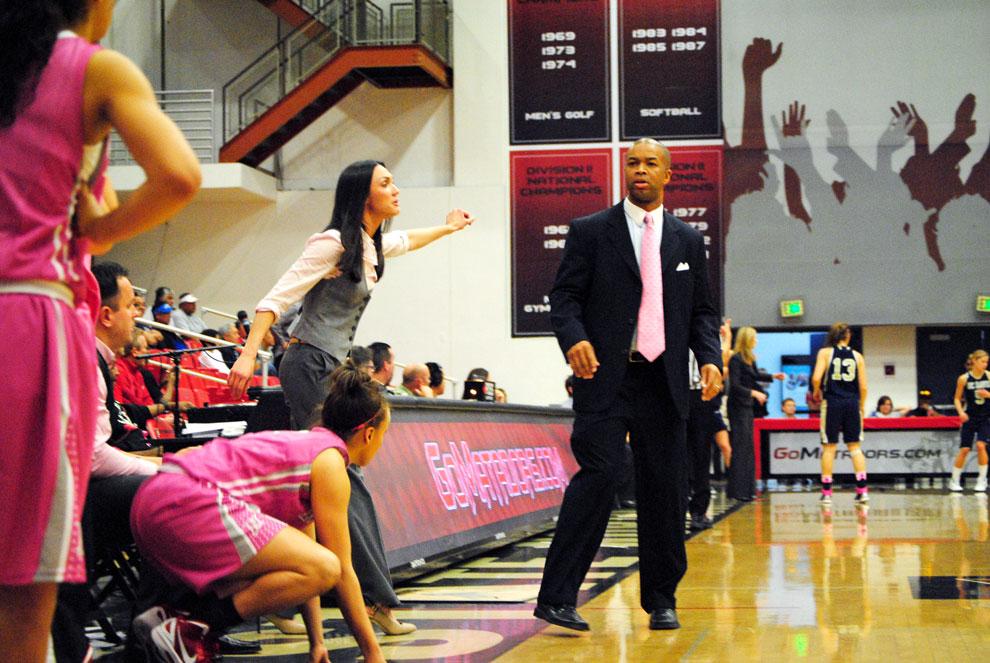 CSUN head coach Jason Flowers looks back at his bench during a game against UC Davis on Feb. 18. Following a four-win season in 2010-11, Flowers won 17 regular-season games in 2011-12. He was named Big West Coach of the Year Monday.

He’s selfless as selfless gets; a man that puts others before himself, and tries to teach that same philosophy to his team.

And what does someone like that get in return? Coach of the Year.

After only two years of being in control of the women’s basketball team, Jason Flowers has made things happen for this young squad.

Who does Flowers give credit to for this season and award? Everyone but himself.

“Honestly, and I’m just not saying this because it’s the thing to say, but I don’t think it’s an individual deal,” Flowers said. “I’m not going to go home and feel like I’ve arrived or that I’ve made it or any of that stuff, because I understand that the award is a representation of the work that the group has put in.”

Flowers continued by giving credit to his assistant coaches, Lindsey Foster, Christine Collins and Mario Trutanic, as well as strength and conditioning coach Jeff Crelling and athletic trainer Sarah Lyons, for the success of the team and for his current accolade.

But most importantly, he gives credit to his players for him receiving this award from the conference.

“I think at times in our profession, we can take ourselves too seriously,” Flowers said. “I think we start to think that we’re the reasons why people are successful. Hopefully, in my position, I’m able to help our kids develop in a lot of different ways. This is a player-driven sport. We’re here for our student athletes and again, I think that award is a representation of the work that a lot of people have put in.”

Flowers wasn’t the only person on the team to receive an award from the Big West. Four of his players received top honors, such as guard Janae Sharpe earning Freshman of the Year and center Jasmine Erving getting a spot on the All-Big West First Team.

“You get what you put in, and he stresses that,” forward Violet Alama said, who won Co-Sixth Woman of the Year. “If we put in hard work and prepare, then we’ll be successful in life.”

According to his players, Flowers is dedicated coach and gives them advice for not only basketball, but for life as well.

“Not only is he a great coach on the floor, I think that we can all agree that he’s a great person to be around off the court,” Erving said. “He always has energy. He’s fun to be around. He’s genuinely a nice person. He cares about everybody, not only with basketball, but he’s always out to help us with anything we need off the court. It’s great to have a coach that cares about you that much.”

Erving has played for Flowers the two year’s he’s been at CSUN, but for freshman guards Ashlee Guay and Sharpe, playing under Flowers has been a great learning experience.

“It feels great. It’s great to have somebody that cares about you and wants you to be successful in life and in basketball,” Sharpe said. “He pushes you to be the best you can be, so it’s a great feeling. He’s a really good coach and I wouldn’t trade him for another coach.”