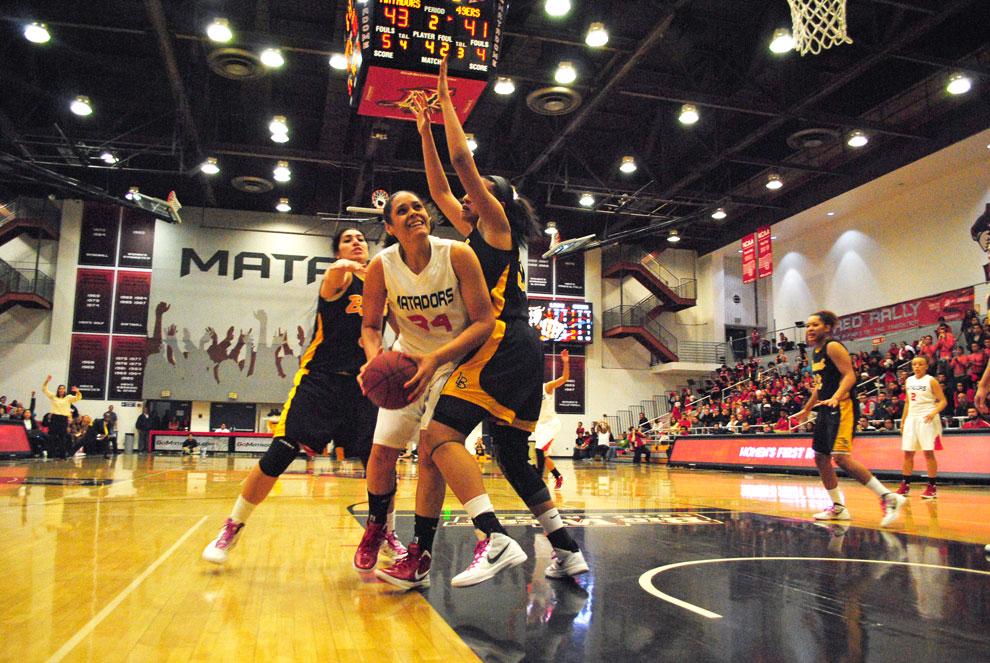 With 17:32 left in the game, the Matadors were riding an 18-0 run and it looked like it was smooth sailing from then on out.

But then something started to happen that ultimately proved too costly in their 57-52 loss to Long Beach State at the Matadome in the first round of the Big West Tournament.

A 3-pointer by Long Beach State guard Lauren Spargo with 15:55 left: lead down to 14 points. Another trey by Spargo almost two minutes later: down to eight.

Northridge started to witness something it has done to many teams this season, but now it was happening to them.

49er guard Hallie Meneses nailed a mid-range jumper: seven points. Yet another make from behind the arc, now from forward Mary Ochiltree: four points. A layup from forward Tipesa Moorer: two points. Then with 5:58 left, Moorer sank a jumper.

On their next possession, the 49ers did what they did best against the Matadors all season: they made another 3-pointer.

That 3-pointer made by Ochiltree gave Long Beach the lead, and with 5:28 remaining, all momentum had swung over to the 49ers.

What had just happened was a 26-4 run by seventh-seeded LBSU in a span of nearly 12 minutes. It was this run that led to the defeat of second-seeded Northridge and ended its season.

CSUN tried to fight back, with forward Violet Alama draining a trey with 31 seconds left to cut the 49ers’ lead to three (53-50). Though she made the much-needed basket, it was too little too late for the team to come back.

“Looking back on it, I probably could have and should have stopped the bleeding sooner,” Matador head coach Jason Flowers said. “We’ve been a team, all year, that have played through those situations. Our group has shown that they bounce back and they handle those things.”

Indeed, Northridge has recovered from big double-digit deficits, but those deficits occurred at the beginning of the second half and not while it had the lead itself.

“We’ve had several comeback wins this year. I talk about our kids and their character in that regard,” Flowers said. “(Long Beach’s) kids showed that tonight. They were down players; half of them are banged up and could barely walk. And they got to the point where they could have rolled over or fought. And they fought.”

From the beginning of the night, it took a while for the team to find its rhythm, and as usual, when they found it, they looked unstoppable.

Forward Jianni Jackson, who is not known for her scoring, sparked a 7-0 CSUN run near the end of the first half. Big West Freshman of the Year Janae Sharpe, who had seven points in the initial period, hit a buzzer-beating trey to push the Matadors’ lead to 31-20 going into halftime.

“We executed. We played at the pace that we wanted to play offensively,” Flowers said about the half. “Most importantly, we guarded. We played defense. They were struggling to score.”

The second half started with a made hook shot by center Camille Mahlknecht and it looked as if nothing could stop Northridge. But the Matadors’ momentum was stalled as they began to watch the 49ers chip away at their lead.

“We just had too many breakdowns on the defensive end when (the 49ers) were making their runs,” Flowers said. “The intensity of their game went up. They were backed into a corner and they came back fighting, and I don’t think we handled that real well.”

The Matadors ended the night shooting 32.2 percent from the field, including a mind-numbing 23.1 percent in the second half alone. On the other hand, Long Beach finished with 38.5 percent, making five of 12 from behind the arc.

Turnovers caught up to CSUN as it tallied 17 for the game, only having turned the ball over seven times in the first half.