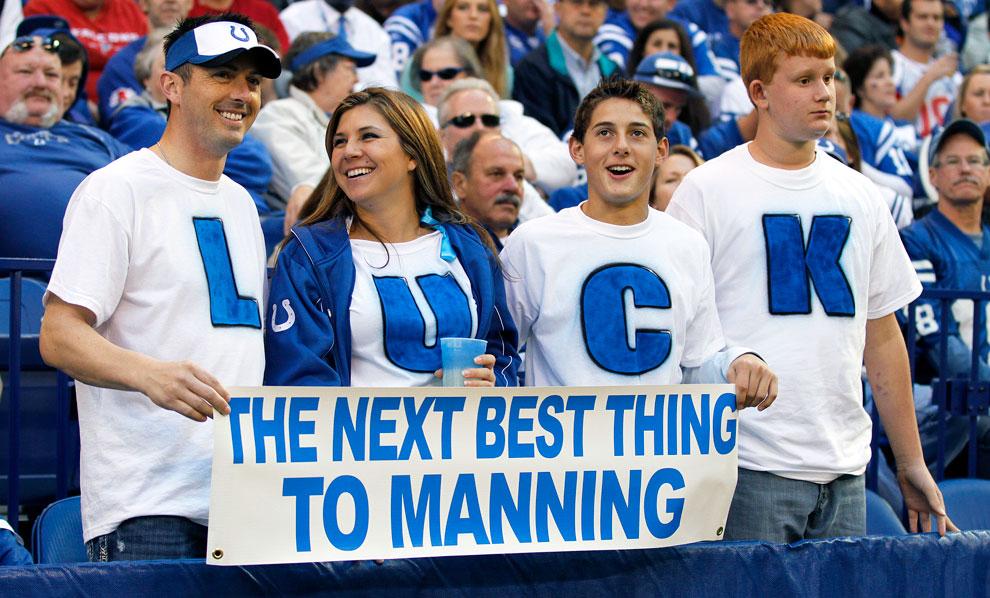 The Colts have until Thursday to make a decision on Peyton Manning. However, ESPN is reporting that Indianapolis is expected to announce today that it won’t be picking up the NFL’s only four-time MVP’s $28 million option and will release him.

If the reports are true, the Colts seriously need to reconsider. Here’s what they should do: Stay with Manning, and don’t draft Stanford stud Andrew Luck.

I’m sure most of you guys are thinking, “This Manzano guy is crazy and delusional. He needs to find another career.” But hear me out first.

Yes, Luck has the skills to be an all-time great – size, arm-strength, leadership, intelligence and athleticism. But after a dreadful 2-14 season, the Colts have many needs on both sides of the ball, and the quarterback position should be the least of their worries if Manning was to remain on the roster.

The St. Louis Rams have already said they want to trade their No. 2 pick and build around quarterback Sam Bradford. After an impressive combine, the stock of Baylor quarterback Robert Griffin III (RG3) is rising faster than lava in an erupting volcano. So the Rams must be salivating at the mouth thinking about what teams like the Browns and Redskins are willing to give up to get  RG3 with the second pick.

Now, imagine what the Colts can get by trading the No. 1 pick and passing on Luck.

An argument could be made that the Colts are in a different situation than the Rams since Bradford is 11 years younger than the 35-year-old Manning. However, not many could say Bradford is better than a healthy Manning. Heck, even a 70-percent Manning is better than most quarterbacks in the NFL.

Let’s pretend I’m Colts owner Jim Irsay. What I would do is trade down with a team that has a top-10 pick and have them throw in other assets, perhaps more picks. Then I’d take Alabama running back Trent Richardson. The Colts, who were 26th in rushing yards last season, will get an added boost in the ground game and take some load off Manning’s arm.

Indy’s No. 1 pick could end up filling any of their myriad other needs: an offensive lineman, a linebacker or a cornerback, for example.

The icing on the cake would be Manning convincing the free-agent wideouts he made into stars, Reggie Wayne and Pierre Garcon, to return to the Colts.

If all that were to happen, the Colts would be looking like a wild card team. Unfortunately, with the reported release of Manning, it appears as if Indy is set on Luck, which will mean no draft picks, no Wayne and Garcon and definitely no playoffs for a few years.

No one really knows if Luck is the next Manning or the next Brady Quinn, but having some kind of help around the Stanford standout could keep him off a quarterback-bust list that includes Ryan Leaf, JaMarcus Russell and Akili Smith. All those guys were thrown into the fire with an awful team and struggled their way out of the league.

If Irsay changes his mind, he could keep Manning for three or four years and then hand the keys to his next franchise quarterback with weapons and support surrounding him, similar to the situations Ben Roethlisberger and Aaron Rodgers were drafted into with their respective teams.

Think about it, would Rodgers have had immediate success if he’d been drafted No. 1 by the 49ers after their awful 2005 season?

The main concern for the Colts is Manning’s health, but doesn’t the guy who brought a Super Bowl title and a new stadium to Indy deserve a chance to prove himself?

If Manning struggles and doesn’t play at his Hall-of-Fame level, the Colts would still be on the right track to building a winning team, and they could draft another quarterback in the near future. The NFL is a passing league now, and quarterback stars are coming out like hot cakes.

I hope somehow Irsay reads this column and stays loyal to Manning. However, I know there’s no chance of that happening. I don’t blame the Colts for wanting Luck, who’s considered the best quarterback in a draft since John Elway in 1983, but going with Manning gives Indy a winning team quicker.

Hey, it is what it is. Hopefully, Manning gets a shot somewhere and that team better play the Colts sometime in the near future. Manning vs. Luck, part II. Only this time, it will be on the field.