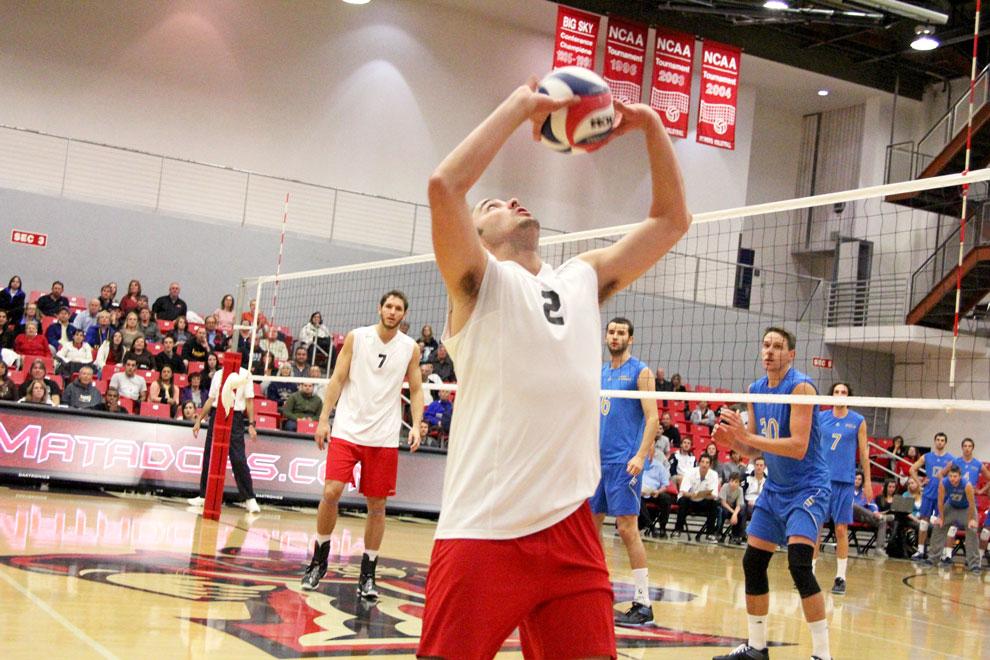 Matador Danny Rodrick sets the ball to one of his teammates in ther game against UCLA Friday night. CSUN continues its nine-game homestand as it faces Ball State tonight at the Matadome.

Owners of their first winning streak of the season following a home win against UC Santa Barbara last Wednesday, the Matadors had the misfortune of running into the top team in the Mountain Pacific Sports Federation – and No. 1 team in the nation – Friday.

Not even the usual edge of playing at home could spark CSUN’s efforts enough to take down UCLA then as the Bruins came away with a 3-0 win.

Tonight, against a streaking Ball State squad who’s won three consecutive games, the Matadors (6-10, 4-8 MPSF) hope to prove Friday’s match was just a bump in the road of improvement by taking down their Midwestern Intercollegiate Volleyball Association peers.

Ball State (10-5, 2-3 MIVA), which shares a league with 2011 NCAA champion Ohio State, is coming off a 3-0 sweep over Park University on Feb. 25 in which it hit a season-best .305. Led by right side Jamion Hartley, who averages 2.69 kills per game, and outside hitter Larry Wrather, who averages 2.58 kpg, the Cardinals have won five of their last six games.

Against the top-dog Bruins, CSUN came out energized and hit an outstanding .324 in the first set, taking them into extra points before ultimately falling 28-26.

“We brought a lot of fire in that first set,” said CSUN opposite John Baker, who led his team with nine kills against UCLA.

The Matadors seemingly had little fire left after the initial frame. CSUN only hit .031 in the second set and lost it convincingly, 25-15. In the third, Northridge stayed close and was tied at 19-19 before UCLA pulled away and completed the sweep with a 25-22 win.

The match against the Bruins was the second of a nine-game homestand which will have CSUN playing against three non-conference opponents in a span of five days. The first will be Ball State tonight. Fellow MIVA member Loyola (Ill.) will follow Friday night and Harvard will pay a visit the next day.