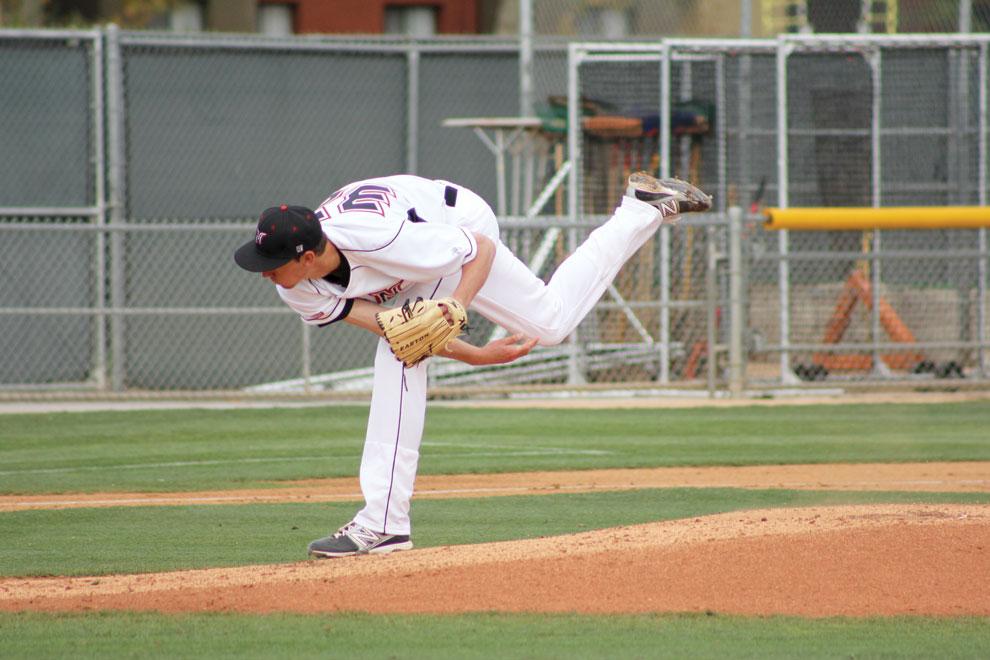 Matador pitcher Brandon Warner looks for a strike against UCLA Feb. 21. Pitching has been a weak point for CSUN this season, with the team having an ERA of 7.00. Photo Credit: Michael Cheng / Daily Sundial

The Matadors are on a three-game losing streak after a trip to San Diego last weekend, but have a chance to snap their misfortune during a three-game visit from Indiana (3-7) starting Friday.

CSUN (6-6) played four games at the San Diego State Aztec Invitational last weekend went 1-3, with their lone victory coming in the opener against the University of San Diego.

Pitching has been the Matadors’ main problem this season. Northridge has allowed four 10-plus run games in their 12 contests so far, including 26 runs in their last two games. The Matadors are preparing in practice in order to refrain from seeing a repeat in this trend.

“We’re starting to simulate game-time situations in practice with pitchers facing live hitters,” said assistant coach Shaun Larkin. “We have them working on weaknesses that we’ve been having.”

CSUN pitchers were rocked for 12 hits Sunday against San Diego State and a six-run eighth inning by the Aztecs ended any hopes of a comeback by Northridge.

The Matadors put up nine hits and nine runs of their own, but three errors on the defensive side played a crucial role in the final 12-9 result.

Freshman Alex Mercado and designated hitter Adam Barry both notched two hits against the Aztecs while Williams led CSUN in RBI with three off a blast in the final inning.

Transfer Cal Vogelsang found his stroke over the weekend, and is on a four-game hit streak heading into this weekend’s match-ups.

“I’ve just been going up there and doing my part on this team. I’m just trying to have a quality at-bat every time and it’s been working out lately,” Vogelsang said. “We’re doing what we’ve been doing all year. We’re just sticking to the quality at-bats and letting those translate into statistics.”

Indiana is coming to Northridge after enduring a 14-3 defeat at the hands No. 14 Louisville on Tuesday. The Hoosiers have lost six of their last seven games.

The Hoosier offense is headed by the freshman duo of Chris Sujka and Kyle Schwarber, who have combined for 20 hits, five home runs and 21 RBI.

Although Indiana hasn’t seen many victories in 2012, the pitching staff has combined to put together a 4.95 team ERA while the Matadors’ staff is hovering above 7.00.

“(The pitchers) are working on it,” Larkin said. “All we can continue to do is get better. We’ll simulate that in practice, and hopefully that carries over to the weekend.”