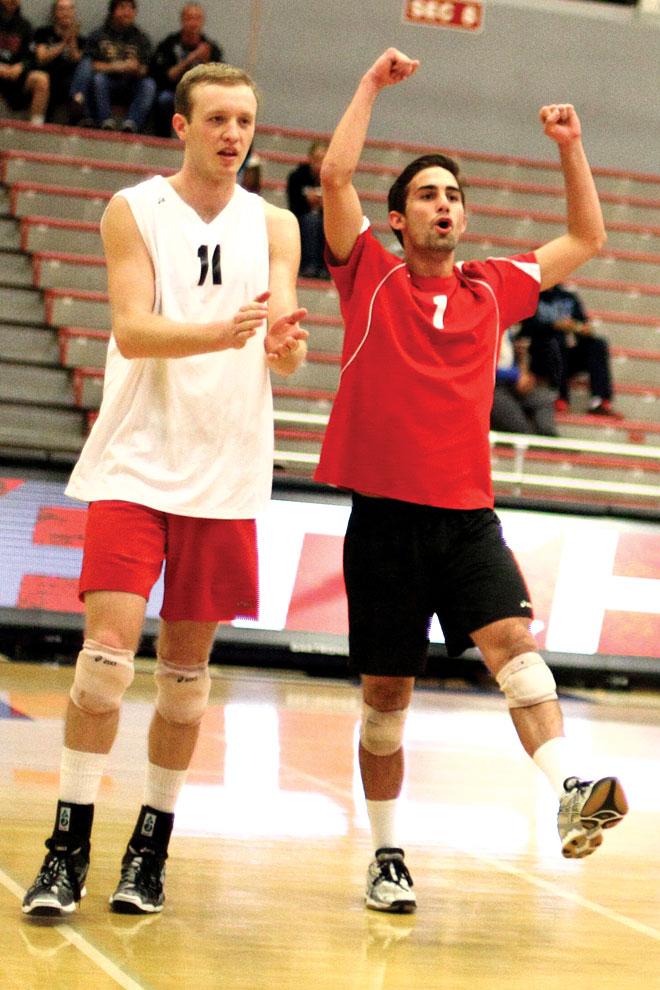 Matt Stork, 11, celebrates with Charlie Condron, 1, in the midst of CSUN’s 3-0 win against Ball State Wednesday night. The Matadors got their first home sweep of the season. Photo Credit: Misael Virgen / Daily Sundial

Three consecutive CSUN mistakes in the third set of Wednesday night’s match-up between the Matadors and Ball State were threatening to make the night longer than it needed to be.

Ahead 2-0, CSUN had allowed the Cardinals to draw within 17-16, the closest it had been in the latter instances of any of the frames.

While it seemed like the small run of errors carried some kind of importance to the Matadors – evident by the subsequent time out CSUN head coach Jeff Campbell called ­– Stork’s shrug-off at the situation is understandable seeing how the senior took it upon himself to kill any Cardinal hope in the eventual 3-0 win (25-17, 25-18, 25-20) at the Matadome.

The serene Stork came back from the time out like a man who had to finish his work ASAP so he could go home to watch the Super Bowl. Sandwiched around a BSU attack error, Stork put down four consecutive kills as CSUN opened the lead gap up to 22-17.

Few moments later, CSUN finished off the Cardinals, 25-20, and Stork went to do whatever it was he had to do.

“We were extremely confident. That’s what it comes down to,” said Stork, who had a team-high 16 kills for the night.

Against Midwestern Intercollegiate Volleyball Association member Ball State, the Matadors looked confident for most of the night. They hit an exceptional .462 while limiting the Cardinals to .191.

CSUN got off to slow starts in every frame, but recovered quickly in each of them. By the time the teams entered the sets’ double-digit stages, the Matadors created separation with small runs and controlled the games thereafter.

After consecutive kills by Ball State tied the game at 10-10 in the first set, CSUN scored 10 of the next 13 points to take command and set the tone for the rest of the night. Seven kills from opposite John Baker led the way for the Matadors to take the first game 25-17.

Baker, a junior, has seen his playing time go up dramatically following the ankle injury of freshman teammate Julius Höefer. Baker has been starting the past five games and performing well enough to keep Höefer, the Matadors’ leader in kills at 3.06 per set, as a reserve.

“John Baker has come in and played great,” Campbell said. “Until (Baker) relinquishes the spot, he’s going to have it. He deserves to be there because he’s our best opposite right now.”

Baker’s 15 kills against Ball State figure to keep him in the starting lineup for Friday’s match against Loyola (Ill.), but the opposite isn’t taking the opportunity to play for granted. He knows Höefer will be back to full strength soon and try to reclaim his starting spot.

“When’s (Höefer’s) back to full health, it’s going to be a toss-up,” Baker said.

The only downside of the Matadors’ first home sweep of the season was that not many were there to see it. While the final attendance report indicated 304 people attended the game, it certainly wasn’t even a third of that when the match started.

Campbell said the low attendance probably had to do with the game being a non-conference one and the rival being Ball State, a school from Indiana.

“It’s not to say Ball State is not a good team because they’re a very good team,” Campbell said. “But they’re just not well-known here on the west coast.”

The man of the deciding set, Stork, didn’t mind the low turnout. He got the job done in a hurry and headed to the locker room, where it was anything but noiseless.

“We kind of viewed it as a practice,” he said. “Nice and quiet.”