Baseball: CSUN unable to score after early lead on Indiana 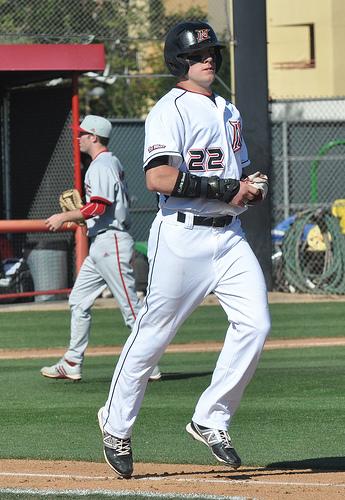 After taking a 3-0 lead in the opening inning, the Matadors thought their day was over and decided to get “comfortable,” said redshirt junior outfielder Adam Barry.

The three runs CSUN scored were the only times the Matadors crossed home plate, losing 7-3 to Indiana University Friday afternoon in the first game of a three-game series at Matador Field.

“We got excited in the first inning when we got three runs and after that it starting going down hill with errors in the infield and stuff like that,” said Barry, who hit an RBI double in the bottom of the first and went 3-for-3 at the plate.

CSUN (6-7) only had one error in the box score, but it felt like a lot more with the Matadors giving up six wild pitches, two of which allowed runs.

“A lot of defensive mistakes that don’t necessarily show up in a box score,” CSUN skipper Matt Curtis said. “Extra bases on our outfielder’s, can’t keep the ball in front us behind the plate and we let them right back in it.”

The Hoosiers (4-8) started chipping away at CSUN’s lead, scoring a run in the second and third innings. Indiana got on the scoreboard on shortstop Dustin DeMuth’s RBI double, which fell in the right field gap.

The fourth innings was when it became ugly for Northridge. In that inning alone, CSUN threw three wild pitches and gave up two scores. The first run was a wild pitch that brought home Sam Travis and prior to that Travis advanced to third on a pitch that got away from the Matador catcher.

Indiana added another run in the fifth and suddenly the Matadors 3-0 lead became a 5-3 deficit.

“Can’t take four innings off and expect to get back in it, it’s too difficult to do,” Curtis said.

The Hoosiers added two more insurance runs in the ninth and didn’t receive a scare until the bottom of the ninth inning.

CSUN had two runners on after Barry was hit by a pitch and Marty Bowen hit a single, but Miles Williams ended the game on a double play and extended CSUN’s losing streak to four.

The Matadors left 11 runners on base in the loss that Curtis called a “disappointing effort.”

Barry, who’s CSUN leader in batting average, doesn’t want his team easing up on the Hoosiers in the next two games of the series.

“The biggest thing right now is we have to keep our dugout up and keep everybody intense for nine innings,” he said.