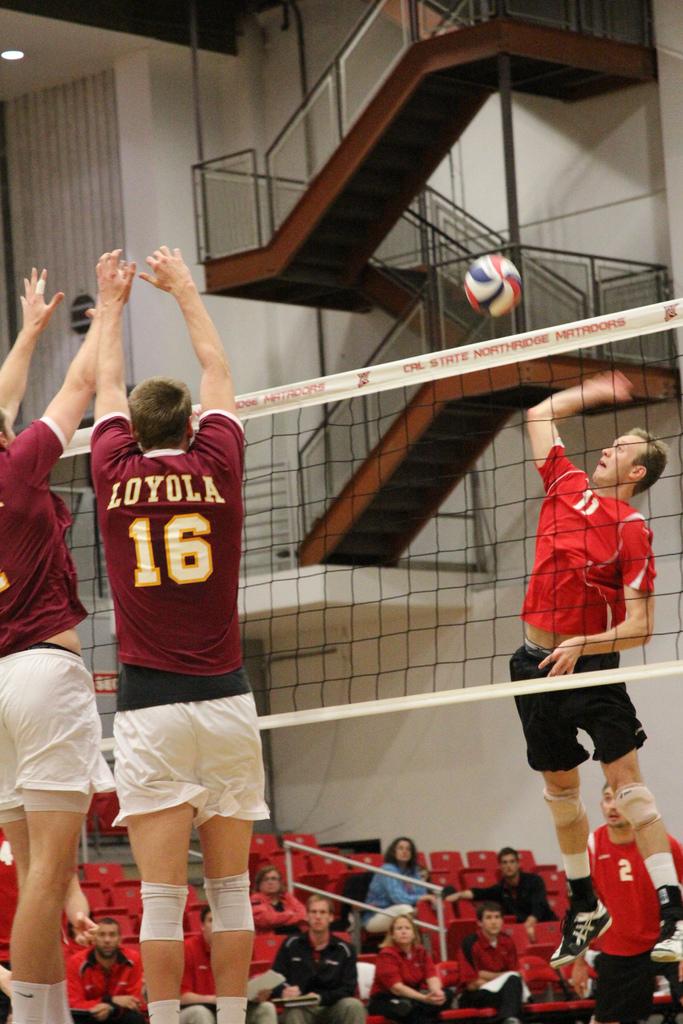 Once again, it was outside hitter Matt Stork leading the charge for the Matadors, who ­– once again – swept (25-18, 25-18, 25-20) a Midwestern Intercollegiate Volleyball Association (MIVA) rival.

Two days after putting up 16 kills in a sweep of Ball State at home, Stork’s 20 kills were by far the most from anyone at the Matadome Friday night. Matador John Baker ­ ­– along with three players from overwhelmed Loyola (Ill.) – was next in line with seven.

The Matadors kept the Ramblers at bay for the rest of the frame. Loyola, who only hit .097 in the set, didn’t come closer than four points and lost 25-18 to fall into a 1-0 hole.

The Ramblers more than tripled their hitting percentage in the next frame (.304), but CSUN went off and hit .706. Stork had four kills and two aces and the Matadors took advantage of Loyola’s seven service errors to once again down them 25-18 for a 2-0 lead.

Campbell noted that Loyola utilized opposite Joseph Smaltzer at setter for the first two frames. Usual starter Matt Mirick, the Ramblers’ leading assist man at 10.77 per game, took back over in the third and ended up with 11 assists to Smaltzer’s 18.

“(Loyola) went with a new setter (Smaltzer) and sometimes when you go with a new setter, a new quarterback, you’ve got some confidence issues,” Campbell said. “Sometimes it takes a little while.”

With Mirick as the setter, the Ramblers made it a little closer, but still were far from challenging the Matadors and lost 25-20.

“Our defense is improving for sure,” Campbell said.

The Matadors once again defeated a member of the MIVA convincingly. Rather than feeling the wins are a testament to the superiority of the Mountain Pacific Sports Federation, the league CSUN plays in, Campbell considers the sweeps are evidence of his own team’s improvement.

The Matadors will go for the non-conference sweep Saturday against Harvard, a team from the Eastern Intercollegiate Volleyball Association.