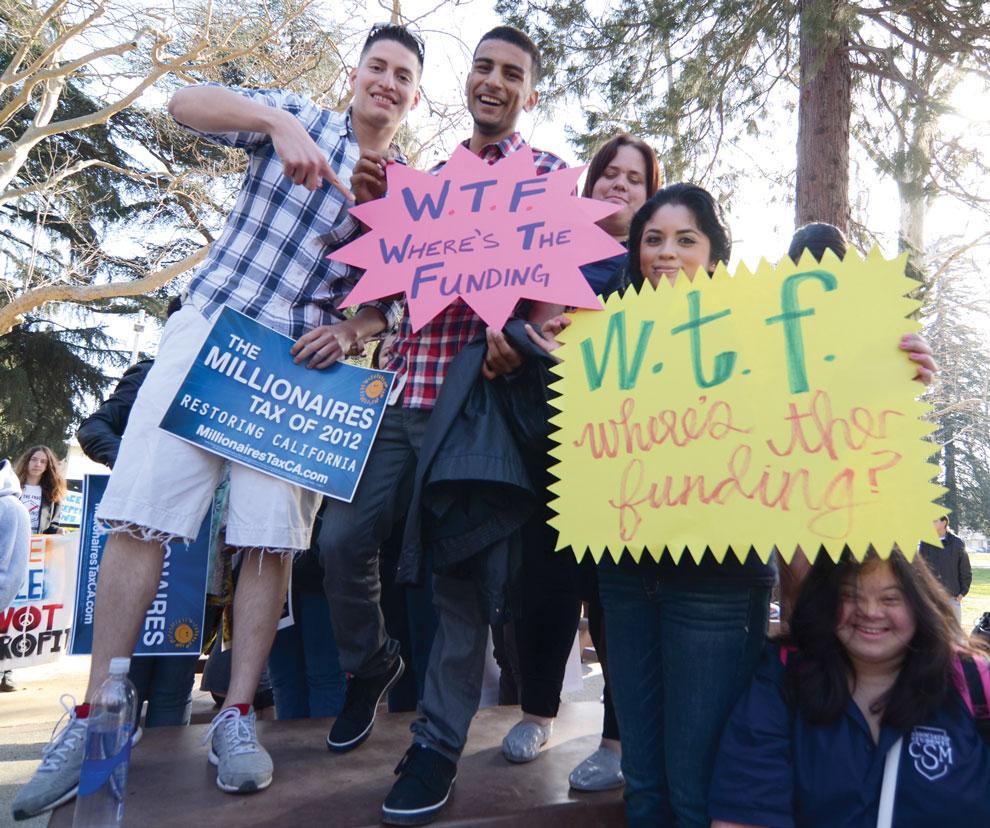 Standing on tables and chanting to build energy, students from College of San Mateo display their signs. College of San Mateo was one of many community colleges who gathered with other California higher education students to march on the Capitol. Photo credit: Ken Scarboro / Editor in chief

In February, the revised California budget projects were released showing that community colleges will take another $149 million reduction.

This was an unexpected cut and it has been nicknamed the “February surprise.” Further cuts took place because of the higher demand for student fee waivers and low property tax revenues and community colleges, like Moorpark College, have had to scramble to find alternative ways to help transfer students stay on track.

“I think everyone is disappointed that we’re having (budget cuts) but I think what we’re doing is responding and trying to make improvements that will be good in the long run,” said Judi Gould, director of transfer at Moorpark College.

With all of the budget cuts in the past few years, the National Center for Education Statistics stated that is difficult for students in community colleges and public universities to complete college in four years. They also said that of CSUN graduates, like Amanda Dellentash, only 10 percent graduate in four years.

“For me it was simple because I was really determined to get out of a community college after two years because it can kind of suck you in,” Dellentash, a communications major who graduates in fall, said. “I made sure that I found a major soon and made sure I stuck to the core classes.”

Dellentash attended Moorpark College, where Judi Gould, director of transfers, said many changes, like new transfer plans and workshops, are being made to optimize their learning environment.

“There’s really nothing you can do about it so we’re trying to make the best out of what it is with our goal to help students to succeed and move onto their next step with transferring,” Gould said.

Currently, Moorpark College has two approved major plans – psychology and sociology – that spell out classes for students to take for those majors. If the students follow the plans, they are able to fulfill both GE requirements and some prerequisites for major classes at the universities.

While the colleges are doing what they can afford to do to help students, it is ultimately in the hands of students to navigate the system, according to Gould .

“I think just overall the state of education in California is for students to be far more flexible, aggressive and creative to reach their education goals,” said Dwayne Cantrell, director of CSUN’s Student Outreach and Recruitment Center.

Gould said their focus has switched more toward workshops on future planning to help focus students and form an education plan that fits their lifestyles.

“We’re hoping to get incoming students – the freshman – to take those workshops so they’re aware early on what some of the limitations are due to the budget cuts,” Gould said. “They can take the courses they need so they can move on after a couple of years.”

When students move on, it’s up to Cantrell and each major department to help students on their path to graduation. Dellentash also thinks that guidance is a must to navigate the scheduling dilemma most students face because of budget cut changes.

“They helped me so much with transferring credits from my community college to CSUN and making sure the classes I did take would work for my major,” Dellentash said. “I took a bunch of liberal studies classes and they helped me so that my classes somehow fit into my major.”

Dellentash is one semester behind – graduating in four and a half years because she switched majors for two semesters. Her CSUN advisers helped her to be able to graduate this fall.

While Dellentash was able to avoid a delay because of budget cuts at the community colleges, she thinks that all cuts to education funding will hurt the future of CSUN and all California schools and students.

“I think it’s going to hurt the image of CSUN because the budget cuts –  while they’re not necessarily CSUN’s problem – are the state of California’s problem.” Dellentash said. “It makes it hard to wake up and go to school because the teachers are too tired and students are tired from working because they can’t afford tuition.”