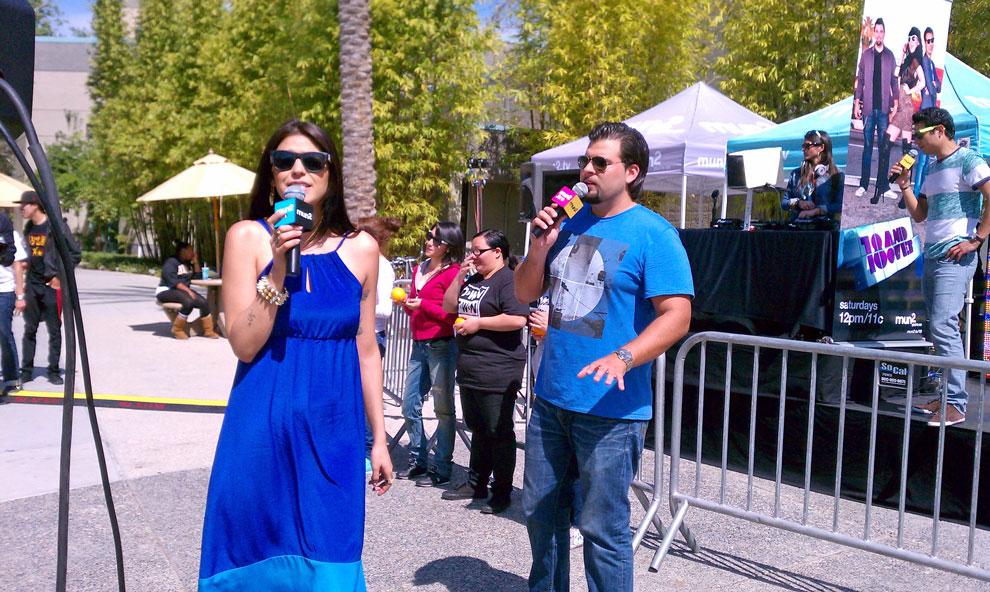 Students had the opportunity to appear on television and win free prizes when Latino network Mun2 came to CSUN to promote its new show “18 & Over” Monday.

“18 & Over” is a music-themed show hosted by Guadalupe Venegas, which tallies up the top 18 videos of the week as determined by radio air play and billboard charts.

Students were filmed competing in pie-eating contests, dance contests, musical chairs, trivia matches and more for a chance to be selected as an “18 & Over” contestant.

“The push-up contest was a crowd favorite,” said Ara Matthewsian, Mun2 marketing team manager. “The contests were kind of a fun way to get students involved and familiar with our program.”

For Rebecca Perezzia, a sophomore biology major and musical chairs contestant at the event, it was a chance to compete along with friends. “It was fun but some guys who couldn’t dance just break danced for the dancing contest, which was unfair.”

“We chose CSUN because the campus is young, fun and has the right profile for our network,” said Alejandro Alonso, Mun2 vice president of marketing. “The local community has a lot of Hispanic presence, and we’re excited to get a chance to interact with students.”

Another goal was to raise awareness of the channel’s programming that would appeal to bilingual speakers of the campus, according to Myra Deleon, a member of the marketing group present at the event.

“It is kind of like MTV, but both in English and Spanish, ” Deleon said. “It’s all about shows and music videos like salsa, merengue, bachata (and) regional Mexican music.”

Among Mun2’s shows are “I Love Jenny,” a reality show chronicling a day in the life of Jenny Rivera, a famous Mexican regional singer, and her family. The show is currently on its second season.

Contestants were given copies of “I Love Jenny” season one.

Alonso said Mun2’s next stop on its two-week campus tour is the University of San Antonio.

“If things go smoothly this time around, the tour will definitely continue into the fall semester, as well,” Alonso said.

The footage filmed at CSUN’s USU will air within the next two weeks and be posted on Mun2.tv.