Women’s basketball: Not done yet: Matadors earn spot in WNIT 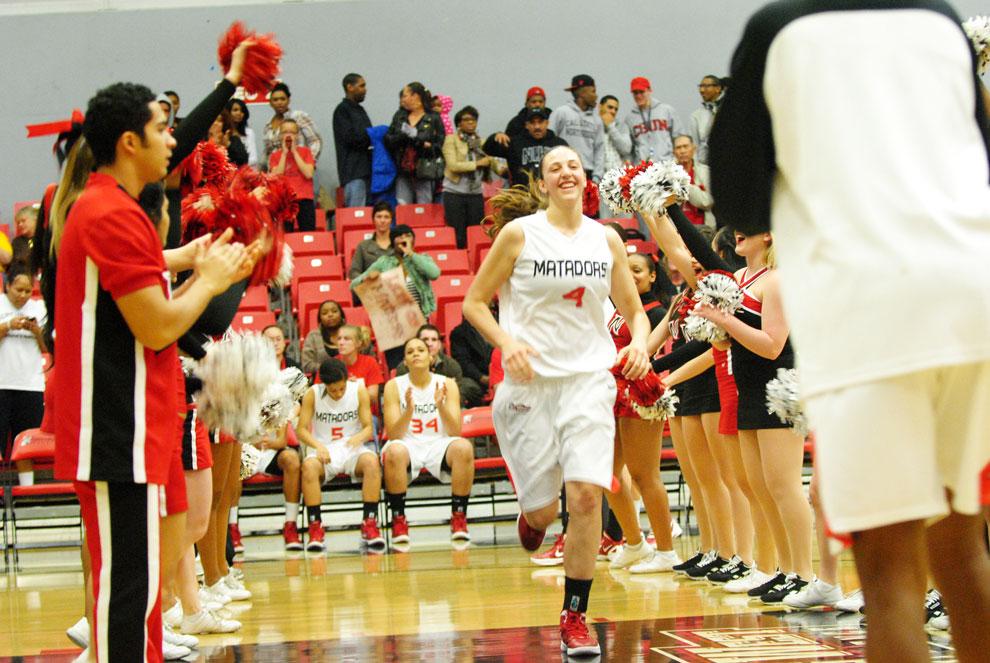 Matador center Camille Mahlknecht runs onto the court during their first-round game against LBSU on March 6. Though the 49ers knocked them out of the conference tournament, the Matadors earned a berth into the WNIT. Photo Credit: Andres Aguila / Senior Photographer

Although the Matadors missed out on the NCAA tournament, women’s basketball head coach Jason Flowers and his squad were given another chance of at postseason play with a bid for the Women’s National Invitation Tournament (WNIT).

Despite being knocked out of the Big West Conference Tournament in the first round, the Matadors placed a bid to enter the WNIT to continue their season. On Monday, the WNIT announced CSUN would be one of 64 teams with a berth.

“We’re all excited about the opportunity to continue playing,” Flowers said. “The reality of it is, there aren’t a whole lot of teams that are still playing right now, so it’s a privilege for us to continue to play.”

Flowers sees the entry into the WNIT as another nod to his team’s work this season, which included a spot on the All-Big West First Team for senior center Jasmine Erving as well as a Big West Freshman of the Year award for guard Janae Sharpe.

“We’re humbled. We’re honored by the opportunity, and on top of that, it’s another reward for our kids for the work that they’ve put in all year,” he said.

“At the end of the day, now you’re in postseason, and there are no bad teams,” Flowers said. “We get the challenge of going down to USD. They’re a good team and play in a good conference. It’s definitely going to be a challenge for us.”

The first-round loss to Long Beach State took some wind out of the Matadors’ sails, but Flowers said that he gave his team time off to recuperate and recover, and now the team is getting back to work in preparation for the Toreros.

“The kids took a couple days off after the Long Beach State game,” he said. “I kind of gave them time to regroup. We kind of watched the game and addressed some things, and we’ve had time to get away from it. They’re resilient and good kids.

“After the disappointment of the conference tournament wore off, they’re renewed and excited about the opportunity to keep playing.”

Had CSUN not made it to the WNIT, it still would have had a chance at some other tournaments around the nation.

“We had a chance to play in the (Women’s Basketball Invitational),” Flowers said. “We would have continued to play either way. I just thought that a postseason, regardless of what tournament it was, would be a good reward for the kids and their work, and Jasmine (Erving) and her four years, and being able to go out as far as participating in the postseason. So, we were going to play one way or another. Again, we’re humbled and excited about the opportunity to play in the WNIT.”