Community and art come together at Das Bauhaus 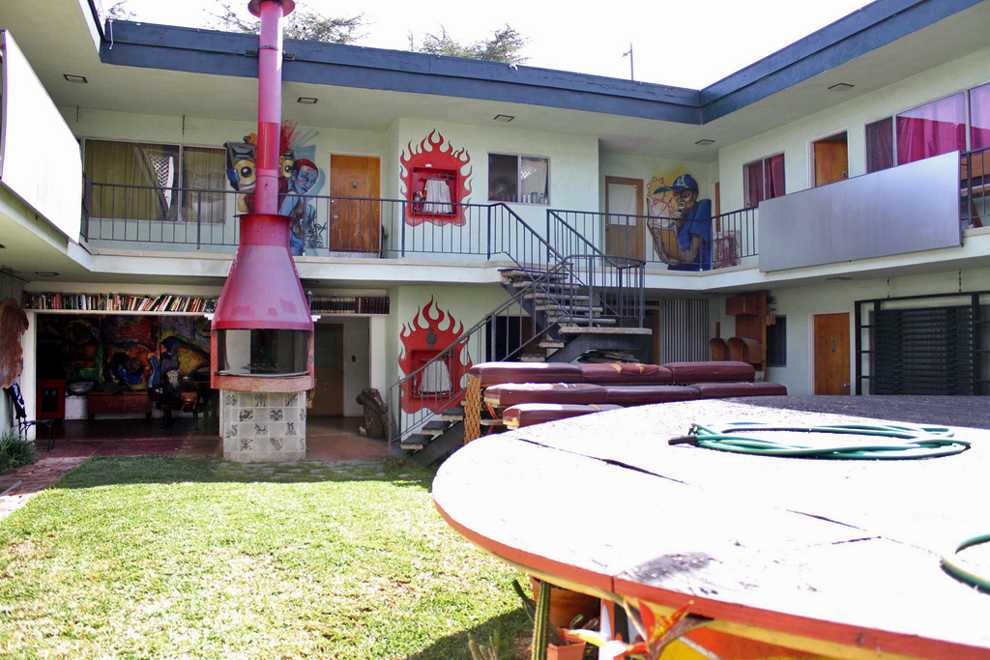 It is said that the parties at the Das Bauhaus Northridge are ragers, with artistry flowing from apartment walls toward the outside patios and celebrities such as Paula Abdul and Flavor Flav occasionally seen lounging around.

Don Larson, Das Baushaus Northridge owner and CSUN alumnus, said those are just some of occurrences at the building.

“You’re never going to see a building like this anywhere,” said Larson as he described the scene within Das Baushaus on Etiwanda Avenue, two blocks south of campus.

And so, Das Bauhaus Northridge plays with the aesthetic theme, in and outside the building.

As soon as the metal entrance gates are opened, a long patio, adorned with plants and grass, serves as the backdrop, Larson said, for candid photo shoots. Enter the building after passing through a cave-like entryway surrounded by glass panels that host display cubicles—art and announcements are showcased there.

After the second set of wooden doors is opened, a large stage is in sight. A mixture of materials decorates the surrounding performance area with metals, wood and plastic. Graffiti, sculptures and paintings add color to the outdoor area of the apartment building. Even the parking garage is not excluded from artistry.

The first floor of the building is reserved for recreational purposes. A kitchen, living area, dart room, library, a large TV and a grand piano function as hub for entertainment.

Often times, tenants enjoy a drink or smoke in the lounge, said Conor Sutton, manager of Das Bauhaus. The outside living area was practically made for interaction and most people spend more time outside their apartments rather than inside, he added.

Since the mid-1990s, the Baushaus has hosted a “cocktail of people,” said Larson. Artists from interdisciplinary methods and concepts, from disc jockeys to architects, musicians and designers, have been part of the community that is nested in the lime-green building.

It began almost a century ago, when Larson’s family moved from Canada and settled in Northridge, around the Etiwanda area. A barn was previously located where Das Bauhaus and another apartment complex currently stand. In 1962, Larne Larson, Don’s father, constructed the buildings.

But when the 1994 Northridge earthquake hit, the buildings were shut down.

After a three-year period of having vacant space, Das Bauhaus was created and the building revamped the community, according to Larson.

Since then, the building has been used for gallery exhibits and stage performances and as a polling place for locals.

For years, it served as the home for the Northridge Community Council.

In fact, Larson said the introduction of the first Northridge Community Council was an effort by the tenants and his behalf.

“It was wild, it was a performance,” he said.

During the meetings they would try to accommodate everyone at voting time, including animals. Dogs were allowed to have a voice, however cats were not given the privilege because “they weren’t trustworthy,” said Larson.

He said his roots in the community were the reason and initiative behind all of the neighborhood involvement. He highly encourages tenants to be active in community service, helping in street cleaning and paint clean up.

“We’re all about brooms and shovels,” said Larson as he described the push for community involvement.

CSUN alumna Araceli Rodriguez, 28, lives at the building and said she loves the experience.
“I didn’t know it existed,” she said. “If I would have known I would have lived here (while I was a student at Northridge).”

She graduated with a bachelor’s degree in anthropology but wound up at Das Bauhaus a few years after commencement.

Now, she is working on sculptures and design, while at the same time being fostered by other members’ art.

Corinne Avila is currently studying graphic design at CSUN and said she had not heard of Das Bauhaus Northridge but is definitely open the idea of living there.

“Yes I would consider moving in because the level of thought and design at the (original) Baushaus is so prestigious,” said Avila. “As artists we constantly need to be searching for new ideas and learning new designs. And that’s the type of designer I am, I’m always looking for other ideas.”

Sutton said the community is composed of “young professionals” who are associated in the art world but are also responsible entrepreneurs.

The apartment building facilitates 24 units, ranging in price from $500-$1,500—each residence is unique in decorative features.

When asked about expanding Das Bauhaus Northridge to other locations or cities, Larson simply said no. His “modern little Ghetty” was never for business but for the community, he said.