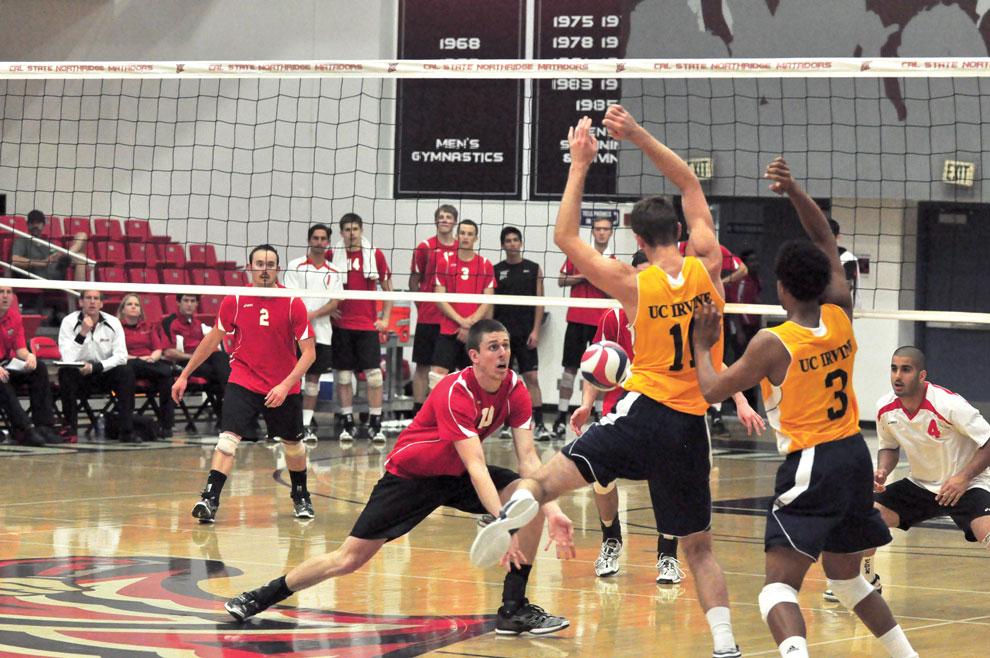 Matador Jared Moore goes for a dig Wednesday night at the Matadome. CSUN hit a modest .287 for the night, but the Anteaters hit .500 and swept the Matadors. Photo Credit: Mariela Molina / Photo Editor

Northridge managed to hit .455 in the opening set, but the hitting dropped off drastically while the defense couldn’t slow the Anteaters, who hit .500 for the match.

“They’re No. 1,” CSUN sophomore Brandon Lebrock said. “We hit well. I don’t know how we hit well, but I think everyone was just feeling it tonight.”

CSUN (8-12, 4-9 MPSF)  got 12 kills from outside hitter Lebrock and junior opposite John Baker added seven, but the Northridge defense lacked what it took to take UC Irvine down.

The Matadors trailed early on in the match after the defense couldn’t manage to side out, but CSUN eventually found its rhythm and tied the set at 13-13. The teams exchanged points for the majority of the set before Lebrock put together a pair of well-placed shots to put Northridge up late.

CSUN trailed 22-21 before scoring three straight points to earn match point. UCI (17-3, 13-3) answered back with a pair of timeouts and points to even the set at 24 apiece, taking away all momentum from the Matadors.

Both teams were squared away at 25 before a botched receive attempt by the Matadors led to another UCI point. CSUN dropped the next point and fell in the first set 27-25.

Northridge hit .455 in the frame but the Anteaters’ .594 percentage bested the Matadors’ attempt.

Northridge came out flat in the second set and quickly fell behind 6-1. The Matadors began to make a comeback, but struggled siding out and fell further behind before calling a timeout with the score at 12-6.

The CSUN defense struggled on the receiving end, continuously setting up fellow Matadors off the net.

The Matadors ran into some hitting woes midway through the second frame and fell behind by as many as 12 before UCI eventually won the set, 25-14.

“I don’t know what happened in the second game,” Lebrock said. “It was either we lost confidence in ourselves or we just had a bad set. Bad sets happen, but there was definitely some plays we could have improved on.”

The Anteaters outdid themselves in the second by hitting an astonishing .636 as a team. Opposite Carson Clark tallied eight kills in the frame while UCI committed no errors.

The Matadors looked lively in the third set with opposite Julius Höefer bringing some intensity to the court after notching five kills in the second game.

The freshman received multiple sets en route to a four-kill, two-ace performance in the third.

CSUN stuck close early on, but again failed to side out and found itself in a 16-10 hole. Höefer brought the Matadors within two after a pair of aces.

Northridge stayed within reach and even tied the score at 23 apiece before Irvine closed the set and match with a kill that went right through Höefer’s arms, ending CSUN’s night, 25-23.

“We just have to build on this for next game,” Lebrock said. “We have to prepare for our next game on Friday (against UC San Diego) and get ready for playoffs.”