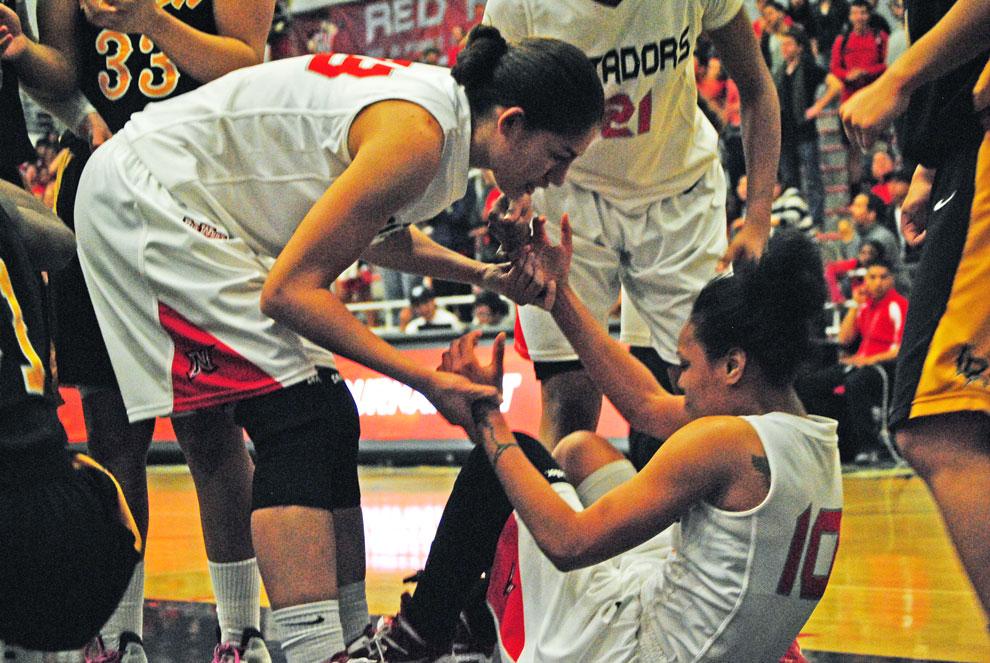 Matador forward Violet Alama helps teammate Janae Sharpe up after she was fouled during CSUN’s game against LBSU on March 6. CSUN had time off and is now prepared to face USD in the WNIT Friday. Photo Credit: Andres Aguila / Daily Sundial

It’s been more than a week – nine days, in fact – since the Matadors lost in the first round of the Big West Conference Tournament. But with time to regroup and earning a spot in the Women’s National Invitation Tournament (WNIT), the team has been preparing for its game against University of San Diego this Friday night.

Now entering postseason play, CSUN has seen its fair share of competitors with varying degrees of difficulty, and the Toreros will be no exception.

“We’re extremely fortunate, as a team, to be able to get a second chance,” Erving said. “We’re starting fresh and in a new tournament. We’re playing a good team. We’re a good team and it’s going to be good competition.

“I don’t think we take anything for granted. We know that we just have to go out there and try our best.”

Erving, a senior who averaged 15.2 points per game this season, was bummed out at the thought of going out so early in the Big West Tournament, especially after having played at a high level all season long and earned the No. 2 seed.

“It was kind of sad when I thought that (our game against Long Beach State) was going to be our last game, but when I found out that we had a chance to play another game, I was very happy,” she said. “It’s another chance for me to just go out there and show my teammates how hard I can work, do it for them and for this season. We have another chance to make a mark in the book this year before I leave, and it’s exciting.”

CSUN, which blew a 19-point lead against the 49ers, has looked at the game tape of the first-round loss and the players have taken note on what needs to be done in order to advance in the WNIT.

“We need to play through the whole game,” CSUN guard Ashlee Guay said. “Even when you’re up, you have to keep competing and not let them get back in the game and execute the things you’re supposed to do.”

“If you go back and look at (that game) statistically, it’s probably one of the craziest basketball stat lines you’ll ever see,” CSUN head coach Jason Flowers said. “We made the same amount of 3-pointers. They made two more free throws than we did. They had 27 turnovers, we had 19. They had 11 offensive rebounds and we had 25. They took 50 shots and we took 75. And we lost by 16.”

But the USD team Northridge faced last year is not the same one it will face Friday. In 2011-12, the Toreros had three players finishing the regular season averaging double-digit scoring, which will be a defensive test for Flowers’ squad.

“We’re going to try and guard from the inside out,” Flowers said. “(San Diego guard Morgan) Woodrow can really shoot the basketball from three, so that’s somebody that we have to be concerned about. But just like any other game that we’ve played, if we can control the paint one way or another, you give yourself a chance to win.”