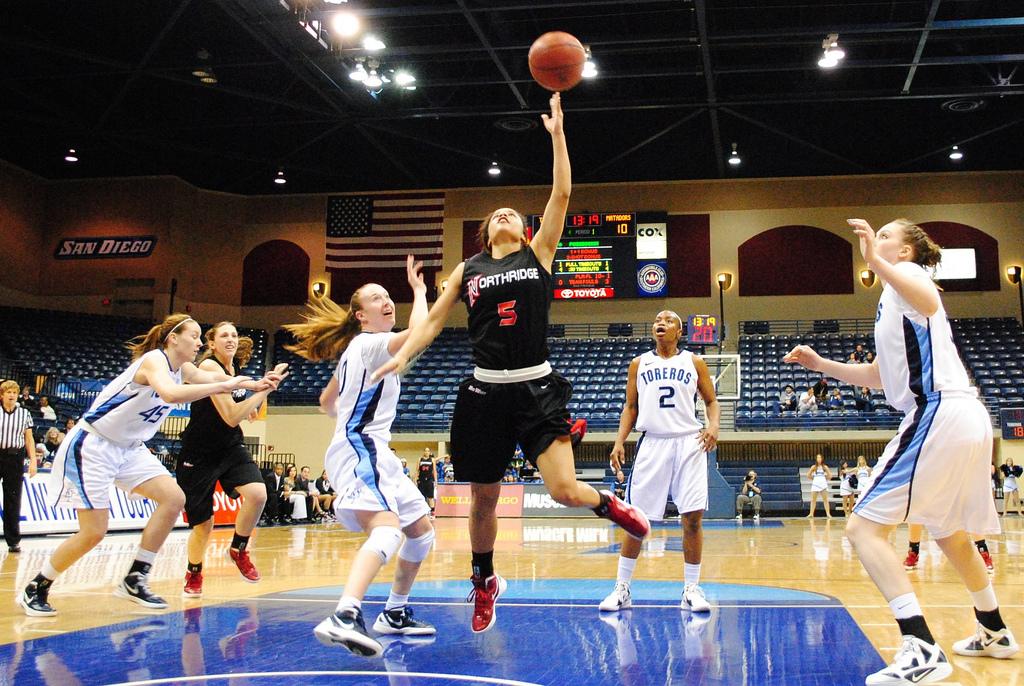 Matador guard Ashlee Guay goes up for a layup during the game against University of San Diego Friday night. Though the freshman guard scored 17 points, it wasn't enough as CSUN fell to the Toreros 60-58. Photo Credit: Andres Aguila / Senior Photographer

SAN DIEGO – Though they trailed by as much as 13 points, their efforts Friday night just wasn’t enough. Offensive boards by the University of San Diego and late turnovers spelled the end of the Matadors’ season as they fell to the Toreros 60-58 at Jenny Craig Pavilion.

CSUN had numerous opportunities to tie or take the lead with just minutes left on the clock. With 1:40 left in the game, guard Janae Sharpe split her free throws, cutting USD’s lead to just one point (59-58). It looked as if the Toreros were going to get the victory from that point, but a foul that sent San Diego guard Morgan Woodrow to the line gave Northridge another chance.

Woodrow would sink her first free throw, but missing her second allowed CSUN to grab the rebound and call timeout with 3.4 seconds left on the clock. The play that the Matadors ran out of the timeout nearly turned into a turnover, but Sharpe was able to control the ball and take a shot from behind the arc, but it was long and bounced off the back iron.

Turnovers were a factor that contributed to the loss. The Matadors were a tad sloppy in the first half, tallying 10 for the first 20 minutes of play. But late turnovers near the end of the game made it harder for the team to get the victory. CSUN forward Violet Alama grabbed the rebound off a missed jumper by Torero guard Dominique Conners with 52 seconds left, but was stripped away by Torero guard Amy Kame.

“We just kept fighting, like we always do, until the end,” Northridge guard Ashlee Guay said. “We probably had some key possessions where we just had silly mistakes, but that didn’t stop us and we knew we were still in the game. It just didn’t go our way at the end, but I’m proud of the team because we worked our heart off out there.”

Guay was the main source of offense for the Matadors, finishing the night with 17 points, six assists and seven rebounds. The San Diego-native did her best to keep her team within striking distance of the Toreros.

“When we found out that we were coming to San Diego, I texted her, ‘You’re going home. Put on a show.’ I thought she put on a show,” CSUN head coach Jason Flowers said. “It’s nothing different from what she’s done at different times throughout the year. She was the Ashlee Guay we know she’s going to be for the next three years here. I’m proud of all my kids, but she was big for us offensively tonight.”

Guay wasn’t the only the point guard that had a big night. USD’s guard Conners was the main source of points for the Toreros. The senior had a WNBA-like game, with 26 points, three assists, three steals and five rebounds. No matter what CSUN did on defense, Conners was in her zone that night.

“Dominique Conners was big-time,” Flowers said. “She just put her team on her shoulders. She made plays for them. She was huge for them all game and in the second half, she was big, especially when they were struggling offensively.”

Rebounding was the other deciding factor in this game. USD was all over the glass, outrebounding Northridge by seven overall in the first half. CSUN eventually won the rebounding battle (39-37), but what caused the most problems for the team were offensive rebounds. The Toreros finished the game with 17 offensive boards and scored 10 second-chance points.