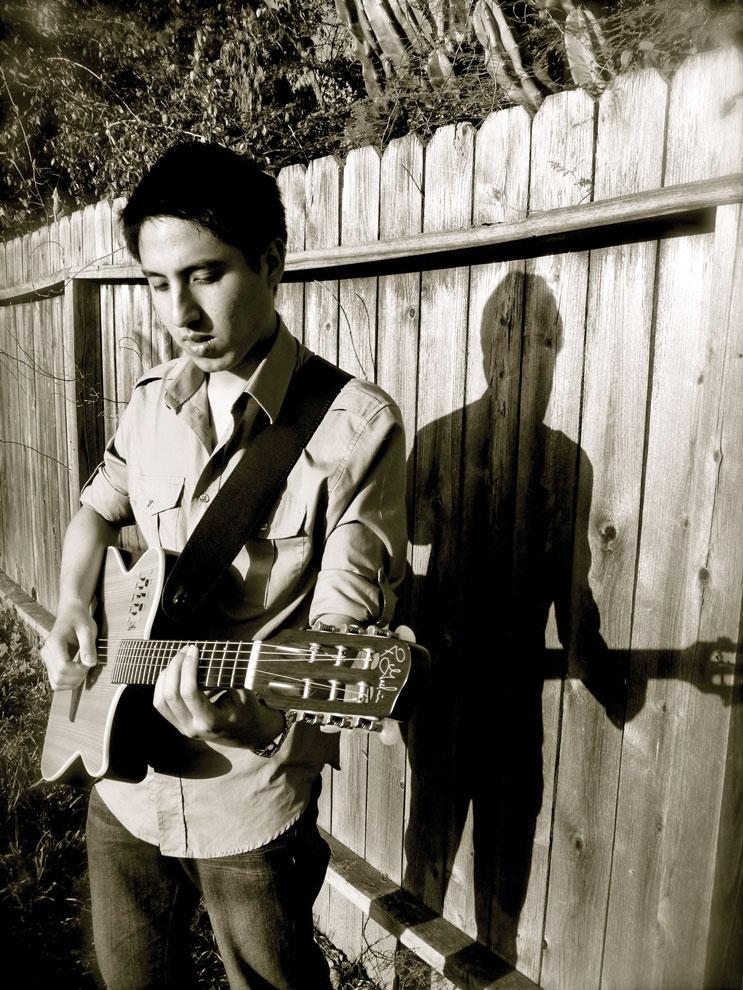 Adrian M. Boluarte Chong lived on $80 a month for six months after arriving at Fullerton College from Lima, Peru. He spent most of his savings on a cheap used car, because it took two hours to get anywhere by bus. He struggled through bureaucracy to get a driver’s license.

But Boluarte Chong was undaunted by obstacles to pursue his dream of studying music in the United States.

“I took that risk. A lot of people criticized me – ‘You’re just wasting your time, you’re going to fail’ – and I just kept working, working, working, because somehow I thought I could make it,” said Boluarte Chong.

Boluarte Chong started playing guitar and listening to American rock and pop as an adolescent and he met a teacher who encouraged his interest in music. However, opportunities to study music in Peru are limited. The U.S. was the place to go.

The first obstacle to overcome was getting the support of his parents.

“Coming from where I come from, a middle class Peruvian family, my parents wanted me to get a degree in something traditional,” Boluarte Chong said.
But after a semester of studying industrial design in Peru, he realized his heart wasn’t in it. “I didn’t see myself doing anything other than music,” Boluarte Chong said. His parents eventually agreed to help him pursue his dream. For two years he saved money and honed his musical skills before coming to Fullerton.

After graduating from Fullerton, Boluarte Chong transferred to CSUN in 2009.  This spring he will graduate CSUN with a Bachelor of Music in Commercial and Media Composition.

He plays guitar and helps compose for Hollywood orchestrator and composer Penka Kouneva  (“The Matrix,” “Transformers,” “Pirates of the Caribbean”), as well as television composer Shawn Clement.  He just submitted tracks for the upcoming Speed Network TV show “Whipped” and also just finished the music for a national Peruvian TV ad campaign for the vitamin supplement Calcibon.

Boluarte Chong enjoys composing media scores in a variety of musical styles including classical, jazz, rock, pop, electronica and Peruvian folk. When he graduates he would also like to form a band to perform his own songs.

Despite the time Boluarte spends practicing, composing, producing and performing music for school and work, he still finds time to be involved with student government.
He was among 15 candidates for Man of the Year who won the Men of Distinction Award at Fullerton College for his involvement in the school and the community,  including serving as a A.S. Senator, A.S. Vice-President and Inter-Club Council President.

Boluarte Chong credits the influence of his parents for his political activism. His mom is a social worker for Peru’s poor, and his father is a pro-environment, left-leaning journalist.

Although Boluarte Chong has had to reduce his student government activities at CSUN to concentrate on his music he still finds the time.
He serves on the University Student Union Board of Directors and the Student Panels for an International Curriculum and Education, a group of eight international students who visit classrooms and do small lectures to raise awareness of different ethnicities and cultures.

Boluarte Chong will perform his original music at his senior recital on May 12 at 4 p.m. in the Northridge Center. For more information about Boluarte Chong and to hear his music, visit his website at www.adrianboluartechong.com.