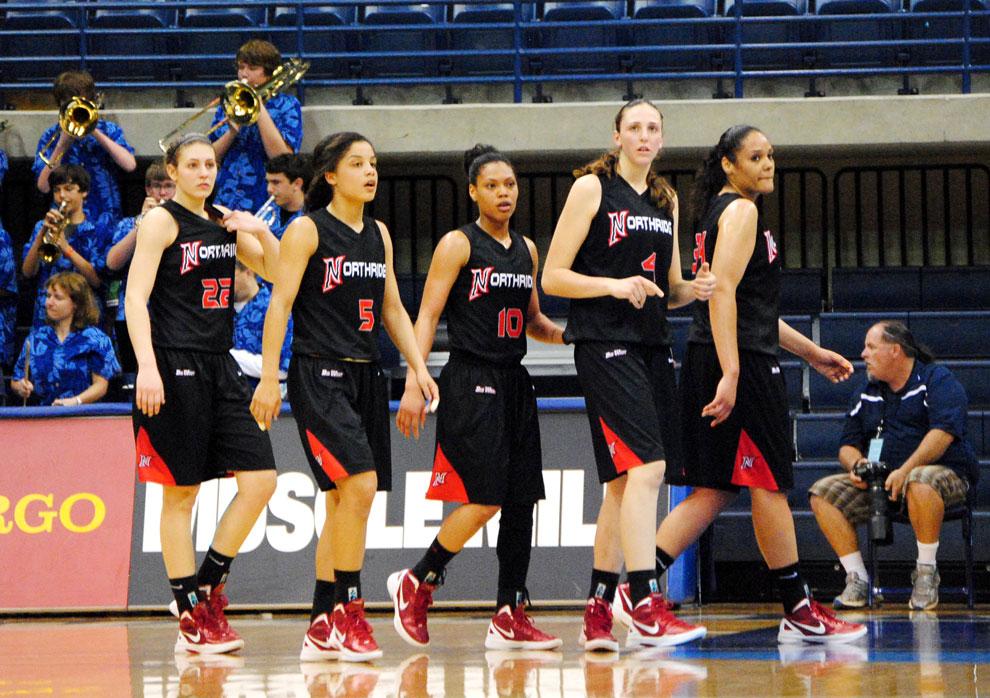 CSUN’s starting lineup takes the court in its game against USD Friday night. The Matadors will bring most of their core back for the 2012-13 season. Photo Credit: Andres Aguila / Daily Sundial

Heart: the word used by Matador guard Ashlee Guay to describe the will and determination the team had as it faced the University of San Diego Friday night at Jenny Craig Pavilion.

While the Matadors lost 60-58, they almost came all the way back from a 13-point second half deficit, showing tenacity and persistence as they battled to advance in the WNIT.

And “heart” might be what the Matadors used the most throughout the 2011-12 season to go as far as they did from 2010-11. From multiple comeback wins to a pair of first-round tournament losses, CSUN’s season was one of constant improvement from its 4-26 record from the year before.

Finishing the season with a 17-14 record, the Matadors had one of the best turnarounds in Division I basketball, winning 13 more games than in the previous year.

“Looking back on it, I’ll probably have time to reflect even more,” CSUN head coach Jason Flowers said after the game against the Toreros. “I’ve appreciated what (the Matadors) have done all year. I just didn’t want them to settle for anything, so I was always challenging them to do more, to be better.”

The team did well since the beginning of year, winning its first three games. Flowers revamped half of the team at the start of his second year as the Matadors’ head coach, adding eight newcomers, six being freshman.

And it was the freshman group that contributed to the success of the team the most this year. Guards Guay and Janae Sharpe ruled the backcourt for the Matadors, with Guay providing the defense while Sharpe was on the court looking to score. Prior to Friday’s game against USD, Sharpe averaged 11.4 points per game and Guay had a Big West Conference-high 129 steals.

Their efforts were enough to land both players with conference recognition. Sharpe won Freshman of the Year and Guay was All-Big West honorable mention. Both players earned spots on the All-Freshman Team.

But Guay and Sharpe weren’t the only people on the team to get accolades. Flowers was named Big West Coach of the Year, center Jasmine Erving earned a spot on the All-Big West First Team and forward Violet Alama was named Co-Sixth Woman of the Year.

“It’s a case where these kids accomplished a lot,” Flowers said. “People want to talk about us, as far as the coaches and me in particular, but it’s not about me at all. Some of these kids have gone from being on teams that rarely won to being winners consistently.”

CSUN was consistent at the beginning of Big West play and won eight of its first 10 games. But what the team was consistent at for most of the season was comeback victories. Arguably, the Matadors’ most impressive comeback win of the year was against UC Davis at the Matadome on Feb. 18. Northridge was down 13 points with 10 minutes left in the game. Then a 3-pointer by Alama sparked the team, which came away with a 63-60 victory.

But with all the success the team had this year, a few low points also came. CSUN reached the Big West Conference Tournament as the No. 2 seed, but was knocked out by No. 7 Long Beach State. There was still light at the end of the tunnel as the Matadors earned a spot in the WNIT to face USD.

Although the team had a week to prepare against the Toreros, they were again knocked out in the first round.

Losing their last two games didn’t erase the fact that the Matadors made sure they are a team that will have to be dealt with for seasons to come.

“This was an unbelievable season,” Guay said. “Coming in here, none of us thought that this could happen. I don’t think anyone else thought it could happen either, but our coach told us that we can do anything and we can make history in this program and we did. We wanted to be a part of that and we were, and we’re going to continue to do it next year.”