Weekly Column: Dear Lakers fans: I hate you. (P.S., I love you.) Observations of L.A. die-hards from a Celtics fan 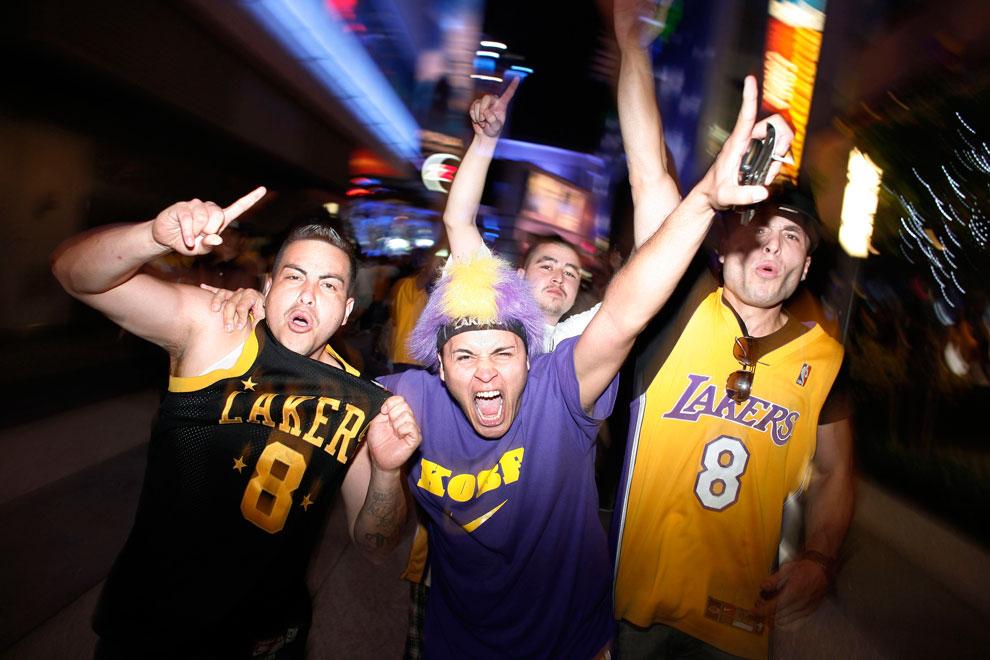 Fans celebrate the Lakers’ championship win over the Boston Celtics outside Staples Center. From thinking that they can get superstar players for benchwarmers to dreams of winning more titles than the Celtics, Lakers fans never cease to amuse. Courtesy of MCT

Let’s get this out of the way: My favorite NBA team is the Boston Celtics.

Teams number two through 29 are…oh, who cares? It’s a big morass. Rank ’em as you will.

Clocking in at no. 30, dead last on my hit list, are the Los Angeles Lakers.

That said, I will admit with fervent belief and all strength of conviction that the greatest game to watch in L.A. is the Lakers.

No, scratch that — the greatest game to watch in L.A. is Lakers fans.

Seriously, you’re hilarious. Listen to any hour of sports talk radio in L.A. and you’ll hear Lakers fans lighting up the lines with lamentations by the dozen. Kobe’s taking too many shots. Kobe’s not taking enough shots. Ron Artest’s defense has suffered since he changed his name to Metta World Peace. Metta World Peace’s defense has suffered since he went on Dancing With the Stars.

And the sense of propriety is insane. Lakers fans seem to think that a yearly championship is a birthright. It’s like the spirit of Dr. James Naismith descended on to Figueroa in a peach basket and decreed that yon Larry O’Brien Trophy shall reside at the Center of Staples (not on the Clippers side, tho’) as long as rivers run and grass grows, until the mountains crumble into the sea, ad infinitum, forever and ever, amen. The very thought of last year’s Dallas Mavericks is seen as a cosmic aberration. The red-letter day of June 17, 2008 — remember that 39-point drubbing at the hands of the Celtics? I do! — has already been erased from the collective memory.

Ah, and the trade talk. The incessant, mind-numbing trade talk. The run-up to the trade deadline was hilarious with fans genuinely convinced — Genuinely convinced! — that the Lakers could trade Steve Blake and a Chick Hearn bobblehead for Dwight Howard. Similarly, they were convinced Deron Williams can be had for Devin Ebanks and an autographed 8-by-10 color glossy of Jack Nicholson. It’s beyond boosterism. Beyond a fan’s wishful thinking. It delves straight into mania. Is it any wonder L.A. is such a great place for a shrink to hang out his shingle?

And the mania gets better every minute, as the writing on the wall gets bolder and more legible. Kobe Bean Bryant is 34 years old and his wrist ligaments are held on with spit and bailing wire. Metta World Peace is shooting a career-low 36 percent. Coach Mike Brown still hasn’t learned how to pronounce Andrew Goudelock’s name. And next year, when the NBA salary cap hardens up and the luxury tax gets punitive, the Lakers will feel every bit of Bean’s $29 mil salary. They’ll be capped out, unable to make roster moves. They’ll be begging to get that Chick Hearn bobblehead back.

But in the spirit of friendship and sportsmanship, let me put my Celtic shillelagh down for a moment. Let me avert my eyes from the 17 glorious green championship banners that hang from the TD Center rafters. Let me offer some advice to you, o Lakers fan, o estranged brother in basketball.

Just take a deep breath. Relax. Know that things will eventually get better. Understand that a full life includes more than just sports. Take some time. Stop and smell the flowers. Give your car windows a rest, and when you put your sun-faded little Lakers flags in the drawer for the year, pause and reflect. Remember the good times. And smile.

Or, at the very least, please be careful and don’t sprain your ankle when you jump over to the Clippers bandwagon.

On second thought, please, Lakers fans, whatever you do — please don’t stop. You’re the best game in town.

—Jim McLauchlin is from Minnesota, so what the hell does he know, anyway? Don’t they play hockey there?