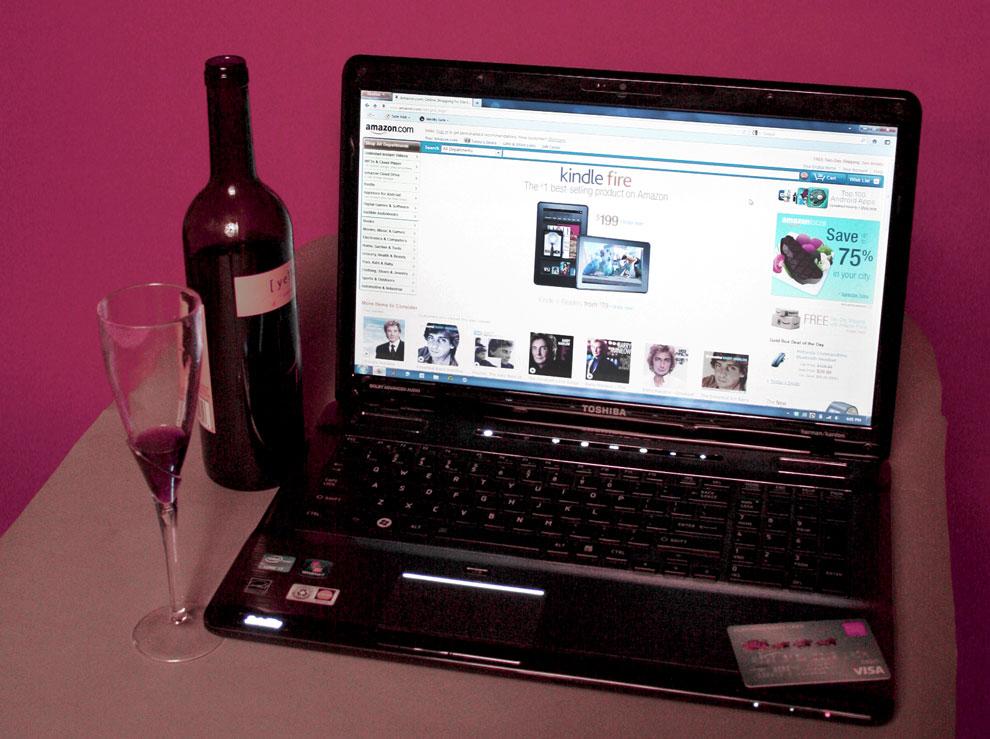 After an aperitif of Lucky Duck chardonnay, and another glass with dinner, Jonathan Randles, 24, of Santa Monica, a reporter for a legal website, said he doesn’t need to window shop.

But Stumbleupon, a social media website that matches a user’s interests with sites to browse, makes it easy. He said he buys “whatever bottle looks cool in the supermarket” and whets an appetite that usually leads to purchase.

From his living room couch, his only caution a self-imposed rule of debit-card use as a guard against overspending, Randles sits, sips and shops.

He “stumbles” upon The Prisoner, a ’60s cult TV classic, which leads to Amazon.com, and the six-disc, full-volume collection of the British BBC series for $40.99. “It’s a really cool show,” he said. He also admits he hasn’t watched it, yet.

A block of ’90s rock the other day with some Yellowtail wine led to a more useful buy: a pair of Weezer tickets for $150.

“It’s like a dinner ritual,” said the University of Missouri journalism graduate who runs marathons as a hobby.“Convenience is definitely a factor, but I’m not going to an online store to look at stuff and shop.”

But such convenience comes at a price, he lamented.

A recent survey by online marketer Kelkoo indicates Randles is part of a growing number. Figures for exactly how many people are drinking and spree shopping online domestically are impossible to track. But 43 percent of all Britons shop after drinking, according to the company’s report.

“On the Internet, while I’m watching TV and, usually, I’ll just be looking at nothing in particular,” Randles said, describing his laissez-faire approach to consumption. “But if I’m ripped and I’m listening to music, I’m looking up concert tickets.”

And it’s not just shoppers who are becoming involved in the drinking and spending scene in the online marketplace; sellers are, too. Whether it’s prompted new spending habits or creating sales schedules, this new type of limitless shopping environment is changing the buying game for consumers and sellers.

The Gilt Groupe, an online retailer, began offering sales that start at 9 p.m. in response to a rise in purchasing from the late-night crowd, according to Andy Page, the company’s president, in a recent New York Times story.

“Post-bar inhibitions can be impacted, and that can cause shopping, and hopefully, healthy impulse buying,” he said.

Stephanie Kendell, 28, of Los Angeles, said she used to enjoy these online-only, evening sales. Then she had to remove the Amazon app from her iPhone after she noticed she was spending too much while out at bars with her friends. The operations manager for a theatrical marketing company said the bills she would rack up—such as the one for a case of wine she bought at a restaurant after having a glass of it at her table—made her curb the habit.

“I used to see stuff at the bar or dinner that I like, like shoes or a purse, and buy them on the spot,” Kendell said, describing the attraction of online-only sales. She hasn’t stopped online buys altogether. Now, it’s just more of an at-home activity.

“I have these vintage wine glasses that were my grandma’s, and I always drink out of them and then get to shopping, which includes browsing for what I want and then comparing prices before I buy,” she said. “It’s way easier online than at a store, because I can just toggle between tabs to see who has the best price. And the wine or champagne or beer is just a bonus, because I can. And it makes it more fun.”

Social media sites, such as Stumbleupon, Facebook and Google, help a user gauge, track and direct their interests. And if the Web surfer desires, he or she can usually get a cursor near a shopping cart-shaped icon within a couple of clicks.

Stumbleupon is the most commonly used social-media site for referrals. With approximately 1.2 billion “stumbles” each month, the site recently passed Facebook for most social-media site referrals in the United States, according to Jack Krawczyk, senior product marketing manager for Stumbleupon.

The site’s “thumbs up” or “thumbs down” rating system keeps track of what a visitor likes to see. Combining those tendencies with a survey, it then produces a website to match those interests when you click the site’s stumble button.

Mobile-device users in the hours of 7-9 p.m. make up the largest growing segment of the site’s traffic, according to Krawczyk. But when presented the findings about drinking and shopping, he said it wouldn’t make sense for services like Stumbleupon to change its sites to cater to intoxicated stumblers.

While not as dangerous as drinking and driving, repeated drinking and Web shopping can have serious consequences, according to Charles Arokiasamy, who chairs the Department of Counseling, Special Education, & Rehabilitation at Fresno State University.

“(A shopper) could easily become conditioned. Just as shopping itself can be addictive, when you pad that with drinking, it reinforces both the drinking and shopping,” Arokiasamy said. “It becomes, ‘Every time I want to have a drink, then I’ll go and shop.’ And when people start doing that, I don’t think they have a lot of control.”

And it generally doesn’t take much alcohol to influence that control, either, he added.

“Very little is enough, because, say you are driving, mostly it’s motor functions; with online shopping functions, it’s minor functions,” he said. “It takes a lot less to affect your state of mind.”

When he sits down on his computer with a tall can of Budweiser, Ronnie Auceda, 28, of North Hollywood, said he rarely does so to spend. But before he realizes it, the former CSUN business major who works in a West Los Angeles law office bought “about $150” worth of posters, T-shirts, shoes and sports paraphernalia.

Sometimes, the shopping will start after he gets excited while having a few beers after work and watching the Dodgers on TV, he said.

“Instead of buying maybe one item, what I end up really doing is buying multiple things at a time. Not going nuts, nothing big,” he said. “But, all of a sudden, I’ve just bought a T-shirt here and there, and a pair of shoes here, and it’s a lot of little things. There’s no way I would spend that much money normally.”

Outside of the perils of alcohol dependency and impulse-control issues associated with this trend, Arokiasamy offered another caution for those involved in drunk Web buys: Caveat emptor. The age-old “buyer beware” adage applies to all sight-unseen purchases, he said.

It’s advice Alex Kluger, 29, of Burbank, usually heeds. But careless online purchases have made him a bit more cautious of his online consumption under the influence.
After Kluger had a few beers and a heated discussion with his buddy about their fantasy baseball teams, Kluger splurged on a trip to the ballpark to prove his friend wrong.

“I was stoked to go see (Seattle Mariners pitcher) Felix Hernandez go against the Angels,” said Kluger, who works in a medical billing office in the San Fernando Valley. “So I went to (online ticket reseller) Stubhub to buy tickets.”

A cautious nature made him slow to adopt online banking, and he still won’t buy clothes online because he wants to see how they fit, Kluger said. But the tickets were a late Thursday night impulse buy.

He found them quickly, and then set out for a 90-minute Burbank-to-Anaheim commute with his girlfriend and two friends, including his fantasy-league companion. But it wasn’t until the party was refused admission at the gate that he realized his crucial mistake.

“I bought tickets for the wrong game,” Kluger said, with a self-deprecating laugh. “After that, I decided I’m not buying anymore baseball tickets online.”

He ended up more than $300 in the hole for the outing after buying everyone’s replacement tickets, as well, he said. But the experience left him with a lasting lesson about drinking and ordering tickets. A simple wrong click can be costly.

“Let’s just say that it’s everything at your fingertips, and that’s the most dangerous part. It’s so easy,” he said. “And then they send all the stuff to your house. With most stores you say, ‘I’ll eventually get there,’ but when you’re online, it comes right to your doorstep.