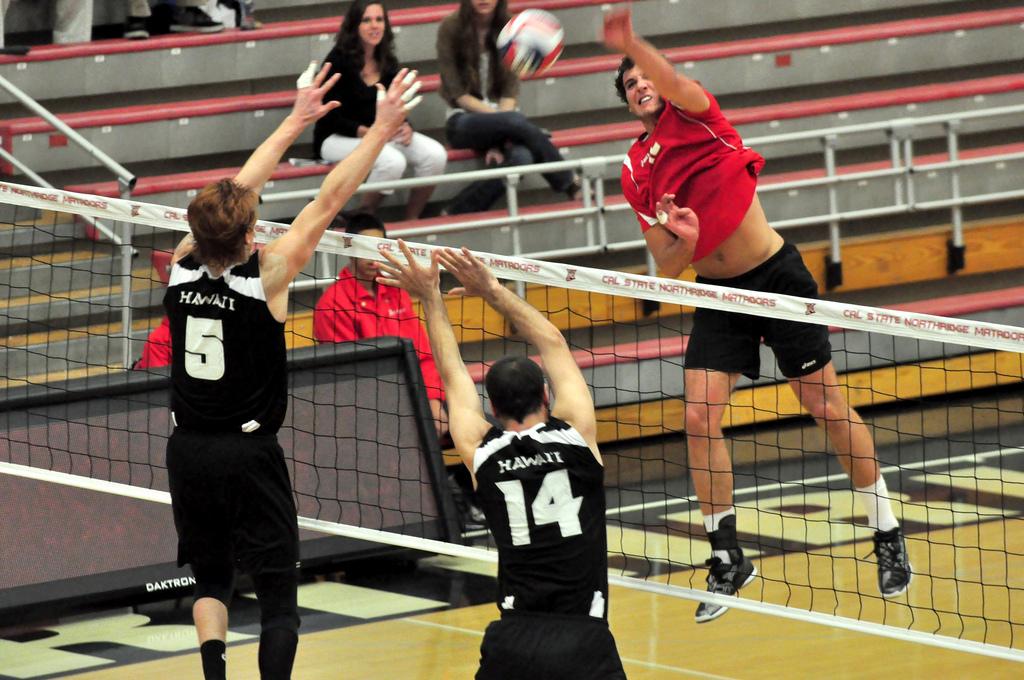 Freshman opposite Julius Hoefer made his first start since his ankle injury earlier this season and powered the Matadors’ (9-13, 5-10) offense along with sophomore Brandon Lebrock. The two combined for 42 kills, 27 coming from the freshman.

“I was looking forward to this game,” Hoefer said. “There was a lot of pressure, but I think we handled it pretty well. It was a great win tonight.”

Hoefer wasted no time and opened the first set with a kill, beginning what would be a romping in the first set.

The freshman showed his dominance early with four kills in CSUN’s first six points, helping the Matadors jump out ahead early and force the Warriors into a timeout.

“We know Hawai’i is a very good team,” Matador head coach Jeff Campbell said. “We had some good practices headed into the match and that just mulled over into this match tonight.”

The Northridge defense gave the Warriors problems and helped CSUN pull ahead 13-5 with Hoefer and Lebrock leading the offensive assault.

Everything continued to go right for the Matadors while Hawai’i’s defense looked lost. Even the Matadors’ libero Charlie Condron got into the action with a kill of his own after a free ball left him as the last option.

The Matadors as a team, led by Hoefer’s six kills and Lebrock’s four kills in the frame, hit .571 while the Warriors hit -.045.

CSUN started the second where it left off dominating its way to a 5-2 lead after Hoefer nailed the Warriors’ Jarrod Lofy in the face then Hawai’i’s Nick West on the top of the head.

The bleeding didn’t stop there for Hawai’i defense, but its offense managed to keep it in the game and battling back to even the set at 11 apiece after a CSUN free ball led to a Steven Hunt kill for Hawai’i.

Hunt and outside hitter JP Marks each had four kills in the frame for Hawai’i and were the reasons why the Warriors pulled ahead 16-13, forcing a CSUN timeout.

Whatever Campbell told his Matadors in the break worked in their favor as they evened the score at 16-16, but Hawai’i again pulled ahead and eventually took the second set 25-21.

Northridge exchanged points early with the Warriors in the second set. The two were even for a majority of the beginning of the second before CSUN jumped ahead following an exciting rally, capped by a Hoefer kill. The rally seemed as if it was never going to end with both team’s defenses completing numerous digs in a play that lasted nearly 30 seconds.

The rejuvenated crowd sparked the CSUN defense en route to a set that saw Northridge tally eight block assists in the set.

Hoefer continued to power the CSUN offense the rest of the way and closed out the third set with six kills in the frame while the team hit .321 in the set.

The fourth and decisive set brought the best out of both teams as neither could work their way into a lead larger than two until Hawai’i pulled ahead by three (16-13).

The lead didn’t last long as CSUN chipped away at the deficit and evened up the match at 20 apiece off a Danny Rodrick ace.

“We were focused out there,” Rodrick said. “We knew what we had to do and went out and executed.”

A Condron free ball landed in play for the Matadors and their defense managed to turn it into a Hoefer kill earning the point for the team, taking the 23-21 lead. A Drew Staker spike in the following play put the Matadors in a match-point situation and a Lebrock ace ended the match 25-21.

“I think in general (the win) gives us the advantage tomorrow night,” Hoefer said. “We also shouldn’t take it easy (on Saturday). They have nothing to lose tomorrow and they’re going to take more risks and we have to be prepared for that.”

CSUN hit .423 in the frame and ended the night with a .390 team hitting percentage. Rodrick tallied 50 sets with a .568 percentage and nine kills.

“This game was really big for us,” Lebrock said. “We needed this win. We just need to look out tomorrow because (Hawai’i) lost tonight, they’re going to be hungry so we have to come out with the same intensity.”