Weekly Column: In Tebow they will trust: New York Jets will catch Tebow-mania, lose all hope in Mark Sanchez. 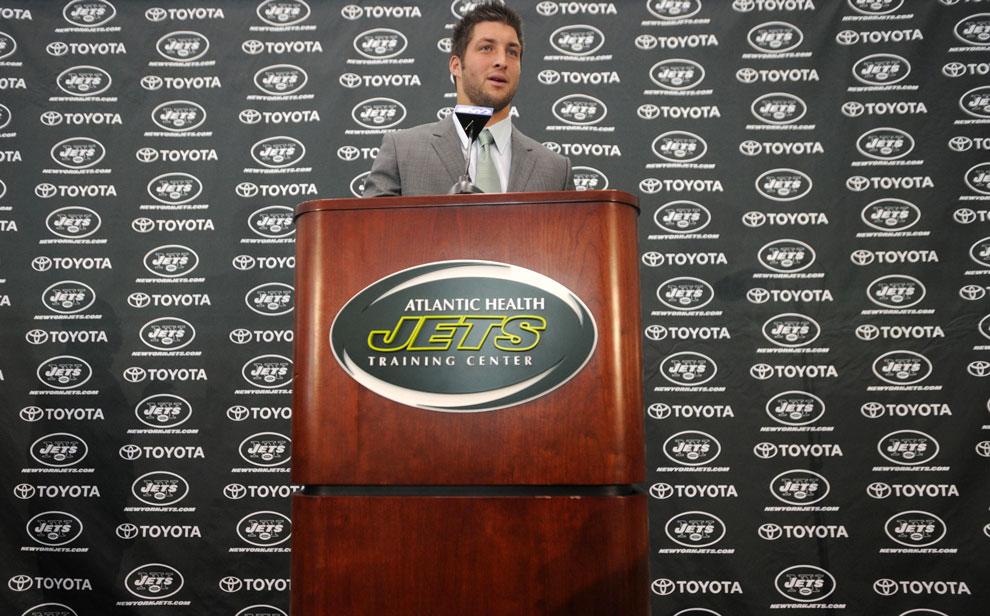 Tim Tebow, new quarterback for the New York Jets, addresses the media at a press conference in Florham Park, New Jersey on Monday. Tebow will get the starting position once Mark Sanchez starts messing up. Courtesy of MCT

To make things simple and clear right off the bat: the New York Jets giving Mark Sanchez a five-year extension worth $60 million is a complete disaster.

With Peyton Manning signing with Denver last Tuesday, the Broncos elected to ship Tim Tebow out of town, and unfortunately for Sanchez, he landed with the Jets – the perfect team to take him in.

Tebow’s arrival in New York spells the end for Sanchez. Book it, by the midway mark of the season, Tebow will be starting in place of Sanchez, making his signing utterly useless. He’ll either have to be traded or be dealt with as a disgruntled bench player.

I mean, why would the Jets roll out a welcome mat and throw a press conference all for their backup quarterback? They aren’t, and make no mistake about it, Rex Ryan and the Jets see Tebow as their future. They’re hoping he’s the quarterback they need to get over their hump.

Sanchez has shown time and time again that not only is he a below-average quarterback, he can’t get it done in the clutch, get along with his receivers or even earn the trust of Ryan. His numbers, while a bit better than Tebow’s, doesn’t say much about his skills. His career QB rating of 73.2 speaks for itself, and his touchdown-to-interception ratio of 55 to 51 while completing just 55.3 percent of passes have proven to not be enough for the Jets.

So why roll with Tebow if Sanchez’ below-average numbers trump his? It’s simple: because “all Tebow does is win games.”

Tebow fits the Jets’ style of football perfectly – the slow-down, ground-and-pound game that’s centered around getting defensive stops when needed. With Tebow behind center, the Jets will become the league’s first-ranked rushing offense.

On the Broncos, Tebow led six, count them, SIX fourth-quarter comebacks in just 12 games as a starter and elevated Denver to the second round of the playoffs by getting past the Steelers’ vaunted defense in an overtime thriller. He ended the season going 8-4 as a starter.

He did all this with the 20th-ranked defense in the league and a bunch of no-name receivers. Just imagine what he could do with a top five defense and Plaxico Burress and Santonio Holmes on each side of him.

Not only that, Tebow-mania isn’t going to stay confined in Denver. Just wait, when Sanchez throws three or four incompletions in a row with an interception here and there, thousands of people in the crowd at MetLife Stadium are going to be calling for Tebow, and Ryan will have no choice but to play him.

And boy, will Ryan be happy to oblige.

Remember, Ryan sat idly by as he watched his team get Tebow’d in the fourth quarter last season. He knows what Tebow can do, he knows how inspirational Tebow can be to not just the team or organization, but the entire city he plays for, and he knows Tebow fits his unique, unconventional style of coaching.

There’s a reason why the Jets didn’t consult Sanchez on this trade – because he’s on his way out, either to another team or the bench. Sanchez’ subpar play has finally caught up to him, and he’s about to be replaced. Tebow will electrify New York just like he did Denver, the Jets will win more games and steal headlines from the Super Bowl champion Giants.

As bad as Sanchez’ extension was, the Jets made up for it by acquiring Tebow.