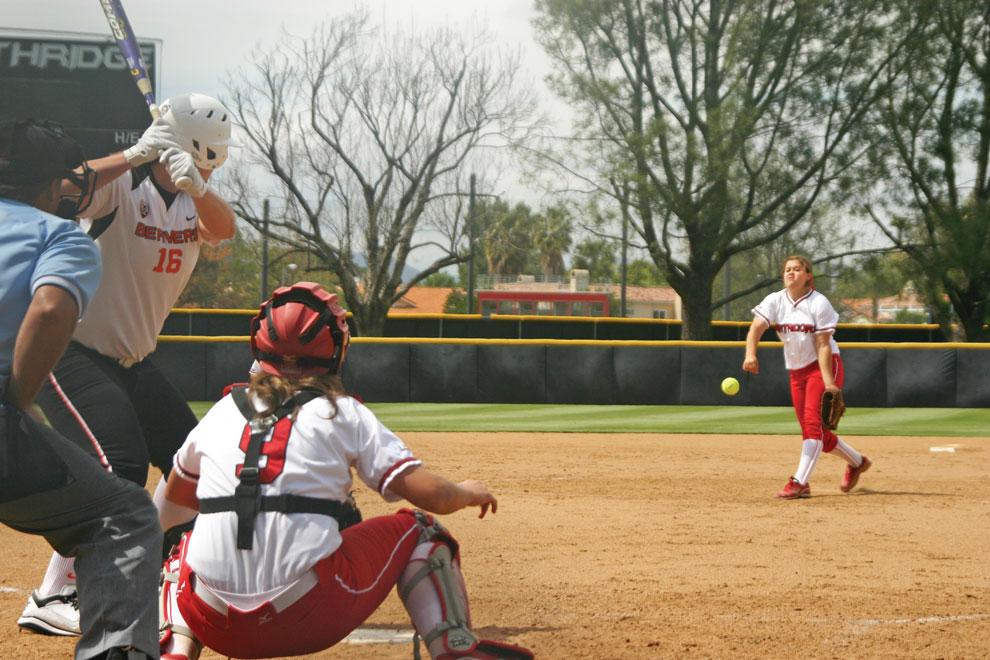 The Matador pitchers were rocked for a combined 18 runs on the day while the bats of CSUN (5-23) only managed to muster a combined two runs in both games. The Matadors lost the first game 13-1 and the second 5-1.

“We saw some good hitters and a lot of power in their lineup,” CSUN head coach Tairia Flowers said. “Offensively, we put up some runs and put ourselves in position to score more runs and we just need to clutch up in the end.”

Northridge’s Leann Lopez had an offensive outburst. She singled three times on the day for two RBI while the rest of the lineup combined to add three hits.

“She’s a little baller,” Flowers said. “If you were to see her day in and day out, you’d see that she just gives it her all and I’m glad the game is finally paying her back.”

“I was just looking to make something happen and get something going offensively,” Lopez said.

Although the offense managed to gather some hits, the CSUN pitchers were taken for 22 combined hits on the day.

The Matadors didn’t stand much of a chance in the first game of the doubleheader. After only giving up one run in the first inning, CSUN allowed the Beavers to score seven more in the second.

Starting pitcher Brianna Elder only lasted 1.2 innings in the circle for Northridge and gave up eight runs, one earned, on eight hits.

The Matadors went to junior Alexa Limon for two innings of work after. Limon allowed four earned runs on three hits and walked three of the 11 batters she faced.

The Beaver offense was powered by Paige Hall, Desiree Beltran, Ally Kuts, who each had two RBI and combined to put up 13 hits on the day while leaving nine runners stranded on the base paths.

CSUN scored its lone run in the second inning off a Lopez single to score Jaci Carlsen.

In game 2, CSUN put itself in a 2-0 hole in the first inning with junior Mia Pagano starting in the circle for the Matadors.

Northridge answered back in the second with a run of its own after a Lopez two-out single found its way through the left side of the infield to score senior Samantha Sloniker.

The Matadors loaded the bases with two outs, but Tanna Bindi went down swinging for the Matadors to end the threat and keep the deficit at 2-1.

Pagano settled down in the following innings, holding the Beavers scoreless into the sixth, but the Matador bats were also quiet during the span.

“I mixed it up and my catcher did a good job calling the game,” Pagano said. “We made some pretty key plays out there to keep them off balance.”

The Beavers opened the sixth with a single. Then Hall singled to make it two on with one out. CSUN ended the threat by turning a line drive to the pitcher into a double play after Pagano snagged the shot up the middle and threw to first to catch the base runner leaning towards second.

The shining defensive play sparked the CSUN offense in the bottom half. The Matadors got two runners on at first and third but two first-pitch grounders to third base kept the teams scoreless.

Pagano hit the Beavers’ Mary Brenner to start the seventh and she eventually came around to push Oregon State’s lead to 3-1 off a Lea Cavestany double down the left-field line.

OSU’s Elizabeth Santana tripled with two outs, scoring two more runs for the Beavers and extending their lead to 5-1 before a grounder to third ended the top inning.

“Our pitchers saw what we need to work on,” Flowers said. “We saw some good things …The numbers show that they jumped on us a little bit, but our pitchers did a good job of keeping us in the game.”

Although the Matadors were bullied in both outings, the players are feeling positive heading into Big West Conference play. CSUN will debut at Pacific this weekend.

“We can hang with anybody,” Pagano said. “The Big West is a tough conference, but (Oregon State) is in the Pac 12, so hopefully we’ll do better.”