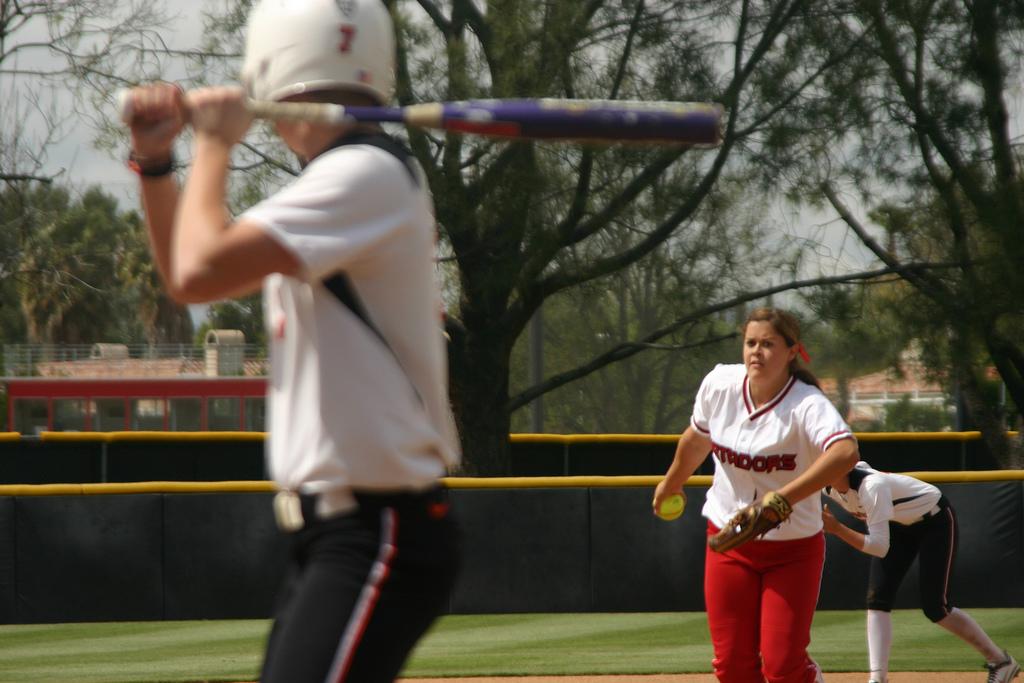 Having witnessed two teammates succumb before the powerful New Mexico bats, CSUN pitcher Brianna Elder tried just about everything to escape the same fate and – in the process – give her team a chance at a late rally during the second game of Sunday’s doubleheader against the Lobos at Matador Diamond.

But against the Division-I leaders in home runs, even throwing balls was a challenge.

“No matter if I threw a high pitch or a low pitch or out of the zone, (the New Mexico hitters) would just hit the ball hard,” said Elder, who pitched the last 2.2 innings of the game.

Elder was the best answer CSUN (7-29) had against the Lobo bats, which put up 12 of their 14 hits against Elder’s pitching predecessors, starter Alexa Limon and reliever Crystal Maas. But the Matadors’ deficit was too large to overcome and New Mexico (24-10) escaped with a 12-10 win to sweep the Easter two-gamer.

After falling in the first game of the day 5-1, the Matadors came out strongly right from the beginning of Game 2 and started the outing with four first-inning hits to take a 3-0 lead into the second.

Not to be outdone, the Lobos responded with three hits, but so did CSUN. The Matadors, which came into the day a struggling offense that was shut out completely during a three-game series against UC Davis earlier in the week, totaled eight hits after three and led 6-3.

“We know we’re a good hitting team,” said CSUN head coach Tairia Flowers, whose team had 13 hits in the game. “Sometimes we put too much pressure on ourselves.”

But the Matador offense went M.I.A. at the worst time, right when the Lobo one woke up. And in a big way. In the fourth inning alone, New Mexico had six hits for six runs, loaded the bases twice and batted around to chase Limon, who gave up the majority of the hits and  the runs with only one retired batter. Limon’s day accounted for 3.1 innings pitched with 10 hits, nine runs and three walks.

Maas came in and got the final two outs, but not before giving a two-RBI single to Jordan Sjostrand. The first baseman had two of her three hits in the fourth.

After a two-run home run by Jess Garcia made it 11-6 in favor of New Mexico in the top of the fifth, Elder came in for Maas and finished the inning with a pop-up and a fly-out.

Elder only gave up two hits and a run as CSUN trailed 12-6 heading into the bottom of the seventh. It was barely then that, aided a bit by two New Mexico fielding errors, the Matador offense came back. Right fielder Mia Pagano had a two-RBI single and then scored, cutting it to 12-10, on a throwing error by Lobo second baseman Chelsea Anaya.

“There were runners on base so I just tried to make contact to do it for my team,” said Pagano, who had three hits and four RBI in the losing effort. “Be the person who tries to start a rally going.”

CSUN had the tying run at second, but catcher Mikayla Thielges couldn’t convert and grounded out the last out for the Matadors, who went winless in their five-game homestand.

Regardless of the outcome, Flowers was pleased in many ways with her team. Mainly for not throwing in the towel despite being down six runs.

“We did a good job of not letting go of the game,” she said.

Said Pagano: “We’re the team that fights at the end.”

While New Mexico added five home runs on the day to bring up its total to 64 for the year, the Matadors also saw quite a bit of offense on their side. It wasn’t enough on this day in part due to the defense, another area in which CSUN could use some improvement.

“We just need to trust our defense a little bit more and put the ball in play,” Elder said.