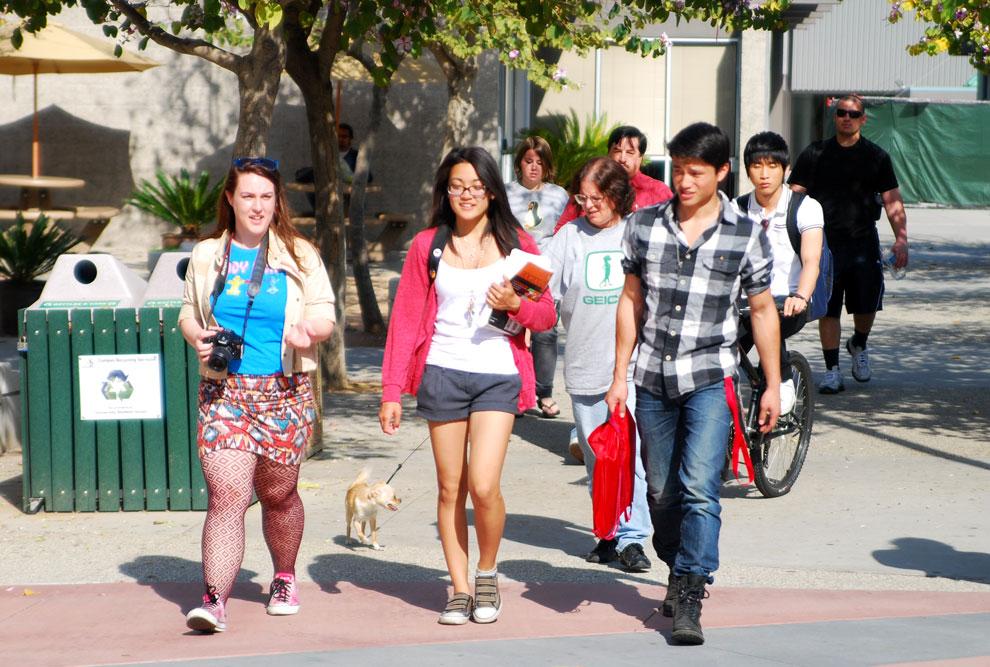 A group of students walk through the University Student Union the day back from spring break. Required to indicate what ethnicity they are in college applications, students say it shouldn't be an issue in being accepted. Photo credit: Anthony Carpio / Sports Editor

In history, race seems to always be an issue in some way and now the problem is becoming more prevalent in college applications. Currently, students are required to fill out a section on their application indicating what race and ethnicity they are.

More people are having an issue with this requirement because they feel that race should not play a role in who is accepted into college.

In October, the Supreme Court will be making the decision to potentially restrict the use of the racial and ethnic identification section on applications, according to the Supreme Court’s blog.

Despite many students feeling like race should not matter when it comes to acceptance into college, they also feel like it does affect who gets in.

Rosa Miriam Hernandez, a freshman communications major, said that identifying your race could have either a positive or negative effect.

Monica Diaz, a freshman liberal studies major, said that everyone should have the same opportunity regardless of their race, but was unsure of whether or not race would affect someone’s chance of being accepted.

“I hope that wouldn’t affect a person’s chance of getting into college, but I really don’t know,” said Diaz. “I heard somewhere that a college noticed they didn’t have a lot of Hispanics so they started admitting more.”

One case that looked into considering race and ethnicity in college admissions was Grutter v. Bollinger in 2003. In this case, Barbara Grutter, a white Michigan resident, claimed that she was denied admittance to the University of Michigan Law School based on race even though she had the grades.

The Law School is one of the top law schools in the nation and has a policy that looks to diversify the student body by giving preference to underrepresented minorities that they feel might otherwise be left out, according to Cornell’s Legal Institute information page.

The Supreme Court eventually decided that colleges and universities could consider race and ethnicity in their admissions decisions, according to Yale Daily News.

Another case dealing with admissions policies is Fisher v. University of Texas, which is threatening to undo the Grutter decision. In this case, Abigail Fisher, a white female, said she was denied acceptance to the University because of her race.

Yale is currently one of the many prestigious institutions that take race into consideration when deciding which students to admit. In an article in Yale Daily News, the university’s president said that the ruling could affect their current policy.

“We’re bound by the law as it stands — Yale has practiced affirmative action in admissions since the 1960s and will continue to do so as long as it is consistent with the law of the United States,” said President Richard Levin said in the article.

Stephanie Ruiz, an undecided freshman, does not see the point of having the racial identification on the application at all because it should not even matter, she said.

“I think that it’s really inconsiderate to have someone identify their race,” Ruiz said. “Someone should be qualified for acceptance based on their abilities, not their race.”

Michael Uhlenkamp, director of media relations and new media for the CSU, said that identification by race is part of the guidelines laid out by the United States Federal Office of Management and Budget (OMB).

“To conform with the guidelines, the California State University must collect from applicants detailed information about their ethnic and racial backgrounds,” Uhlenkamp said.

This information is then used for local, state and federal data reporting, according to Uhlenkamp.

“They use it for a variety of reasons including monitoring changes in demographics,” said Uhlenkamp. “Oftentimes, the demographic information is used to determine funding for various grants or programs.”

An example of these programs, according to Uhlenkamp, would be the U.S. Department of Education providing grants to universities that have been designated as Hispanic-Serving Institutions. He noted that CSUN is one of these campuses, having received a grant for $1 million in September 2011.

Amanda Nicole Jaramillo, a freshman radiological technology major, said that if the information is used for statistics then she understands why it is necessary.

“If the student’s race is used for polling statistics and other things like that, then I guess I understand why it is there, but it should not matter,” Jaramillo said.

Jaramillo is sometimes apprehensive about identifying herself by her race but she does it anyway.

“I don’t think it should matter so I do it, but I know it doesn’t identify who I am,” she said.

According to Uhlenkamp, race plays no part in which students are admitted, but is merely a way to help collect information for the local, state and federal levels.

“Public colleges and universities in California are prohibited under proposition 209 from considering this information,” Uhlenkamp said.

Proposition 209 says that the state will not discriminate against anyone based on race, sex, color or ethnicity.

“Even if they say it doesn’t matter, it does,” Ayala said. “I feel like I get categorized and put into a box when I have to identify myself by race on an application.”

Like Ayala, Jose Gonzalez said there are always classifications and always will be.

“Having to identify my race doesn’t bother me as long as it’s not offensive,” said Gonzalez, a sophomore business and finance major.

Regardless of whether race is really considered when choosing who to admit or not, race is still a required part of the application process. There are several different categories students can choose from, according to Uhlenkamp.

“The categories students can choose align with federal reporting requirements which is also used by the U.S. Census Bureau,” he said.

Gonzalez believes that restricting the use of the racial and ethnic identification section on the application will be the right decision.

“In this day and age you can’t keep someone out based on race because it’s wrong and it’s not allowed,” he said.