Baseball: Matadors look to bullpen as they face ‘Runners 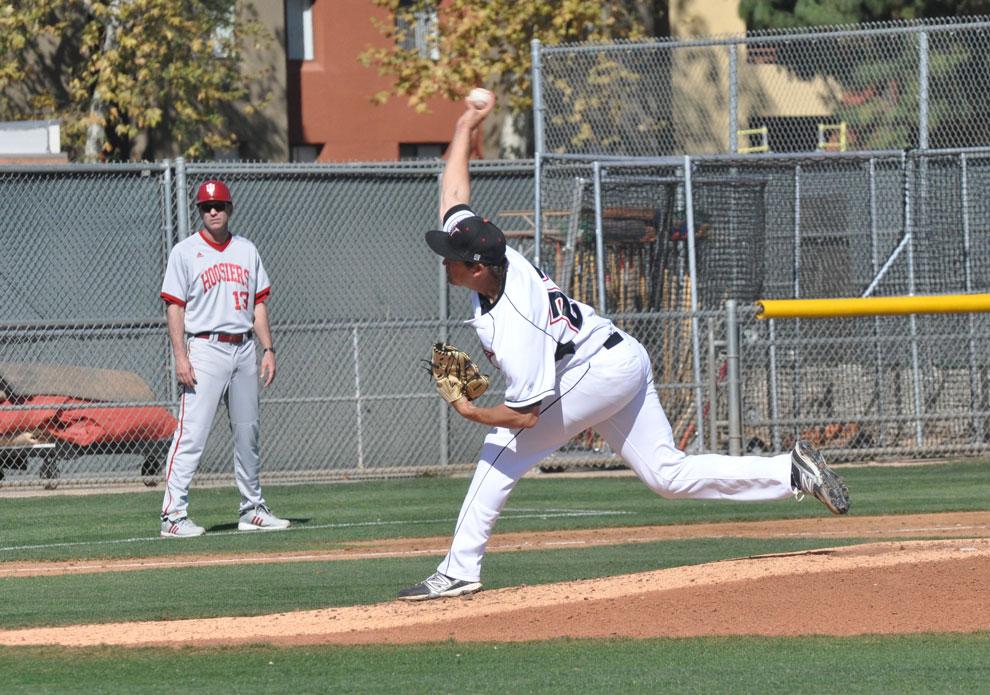 CSUN pitcher Vincent Roberts looks for a strike against Indiana on March 9. Roberts and the Matadors aim to build some momentum as they host Cal State Bakersfield today in a non-conference meeting. Photo credit: Mariela Molina / Photo editor

After winning the final game of the weekend series at UC Santa Barbara Saturday, the Matadors (13-18, 2-4) will try to get on a winning streak against CSU Bakersfield (15-15) today at Matador Field.

For the second time in Big West Conference play, CSUN dropped the first two games of a weekend series, but managed to avoid a sweep with a victory in the final game. In both wins, CSUN had freshman Jerry Keel on the mound and put up enough runs to salvage wins.

Junior Alex Muren has been another go-to starter for CSUN and has combined with Keel for an 8-4 record.
Only three other pitchers have made starts for CSUN, but they haven’t been able to slow opponents’ bats and failed to pitch deep into games, forcing the bullpen to work more innings.

Senior Justen Gorski will make his second start of the season for Northridge today and face the Roadrunners’ Spenser Messmore. The right-handed CSUN pitcher has pitched 18 innings in 10 appearances and has a 6.00 ERA with a record of 1-0.

The inability of any of CSUN’s other starters to find success on the mound this year has doomed the Matadors up to this point in the season.

Senior Vincent Roberts is still winless for the Matadors in eight starts while freshman Brandon Warner has made four starts but only earned a single win.

Roberts’s ERA has ballooned to 6.62. He has allowed 40 hits in 34 innings pitched. Warner’s ERA is at 4.68.
Despite the woes from the CSUN starters, the bullpen combined to give up only two runs, one earned, in the three games at UC Santa Barbara.

CSUN put up 22 hits against the Gauchos with seven of those coming in Saturday’s win.

The outfield tandem of sophomore Miles Williams and junior Nathan Ring combined for four hits, but a three-run sixth inning provided the extra push for CSUN to overcome a 2-1 deficit.

Junior transfer Cal Vogelsang ended his hitting streak at 12 games in Thursday’s loss but bounced back on Friday with two hits in a 8-4 losing effort.

The Roadrunners come in with a 2-10 record on the road. However, they won their last road game on April 3 at Santa Barbara behind senior starting pitcher Messmore and his second complete-game win in only his second start of the year.

CSU Bakersfield’s offense has some powerful bats in its lineup with four hitters having tallied multiple homeruns on the year.

Sophomore infielder Oscar Sanay has provided the speed for the Roadrunners’ offense with five stolen bases and is hitting .351 on the year.

Junior catcher Frank Martinez leads all Roadrunners with a .362 average and leads the team in slugging at .562 in 10 starts.

The bats of senior DC Legg and sophomore Cael Brockmeyer have already combined to tally six homeruns and will pose a problem for CSUN pitchers.