Ron Paul: The only peace candidate 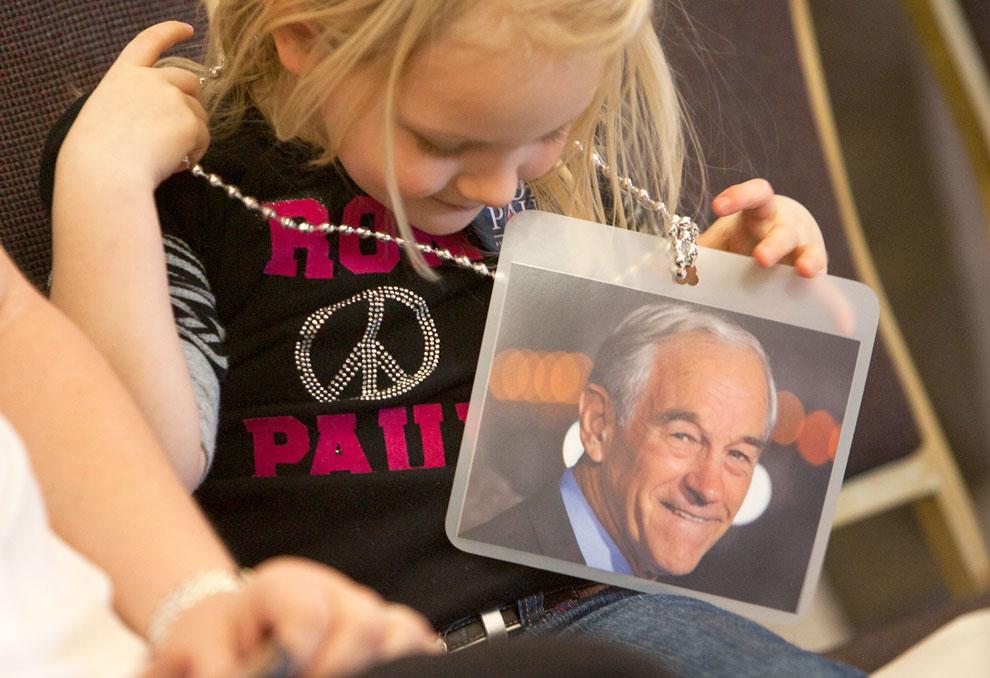 Sydney Walker, 4, prepares for a rally featuring Republican presidential candidate Ron Paul among a noon-time crowd of about 300 at the Nampa Civic Center in Nampa, Idaho, on March 6. With Santorum out of the race this week, Paul may gain more delegates. Photo courtesy of MCT

There are many good reasons why one should vote for Ron Paul. He’s a Christian that believes that marriage is between a man and a woman, but, unlike Rick Santorum, he doesn’t believe that the government should have any say in marriage or other social issues. He was one of Ronald Reagan’s early supporters for the presidency, but has no qualms pointing out that the Reagan administration continued the trend of growing the federal government. He might be serving as a congressman, but his life career has been as a physician. He’s actually worked in the medical industry and has seen firsthand the damage that the federal government has done in intervening there. Unlike Mitt Romney, the father of “Romneycare” and subsequent grandfather of “Obamacare,” Paul has consistently been against socialist medicine. Unlike Newt Gingrich, he’s been faithful to his wife for over forty years.

In addition to his great ideas on domestic policy, Ron Paul’s greatest distinguishing characteristic is in his foreign policy ideas. He alone among the presidential candidates, including incumbent Obama, has a foreign policy of true peace.

Newt Gingrich has repeatedly called President Obama’s foreign policy weak and consisting of talking too much. This is despite the fact that President Obama has thus far authorized military intervention in Libya, Uganda, and expanded them in Pakistan. The war in Afghanistan is still ongoing. The war on drugs, although nominally not a ‘real’ war, has consisted in real casualties in Mexico, Colombia, and elsewhere in Latin America between U.S. backed local governments and drug cartels. President Obama is a war-hawk, but what’s terrifying is that Gingrich considers him too soft. If Gingrich were president, where else would he insist we need to intervene in? Given the candidate’s love for moon colonization, we might very well expect a Gingrich administration to lead us to war against space aliens.

Rick Santorum’s proposed foreign policy leaves little to like. He is a strong believer in American’s need to more proactively “lead” the world. In a sense, Rick Santorum’s foreign policy is the least conservative of the republican candidates. When President Richard Nixon opened negotiations with the People’s Republic of China he made it clear that the United States’ role abroad was not of a policeman’s. Even President George W. Bush was explicit during his early presidential campaign that he was not a believer in nation building. It is odd then that Santorum has taken a stance contrary to that of his republican predecessors.

There is of course Mitt Romney, whose foreign policy differs little from incumbent President Obama’s. The only substantial difference is his calls for possible military intervention in Iran, but this is hardly anything original. Ever the follower, Romney’s views on Iran mirror that of the Washington establishment; Romney has made no proposals for ending any of our current wars.

Ron Paul, in a deep contrast to his fellow candidates, has advocated a return to a non-interventionist foreign policy. Many have mislabeled him as an isolationist because of this, but in reality he has no intention of building an iron curtain around the United States or prohibiting communication with the outside world. To the contrary, he wishes to lower trade restrictions in order to allow us to more easily communicate, buy, and sell with foreigners.

Not only would Ron Paul seek a policy of non-intervention abroad, but he would begin to reduce the number of U.S. military installations abroad. He would, for example, seek to reduce U.S. military presence in Europe. The Nazi regime has long been removed, and Europe is a wealthy region that can defend itself. Japan is one of the richest nations in the world and does not need the U.S. to protect it. Contrary to what the sensational media and war-hungry politicians would like you to think, we’re living in a fairly peaceful time.

There is no axis of evil plotting to attack the United States. The People’s Republic of China does not have the naval capacity to move its troops around beyond its immediate vicinity. Even if they did, it’s doubtful that they would seek to attack the United States when we’re one of its largest trading partners. North Korea’s nuclear arsenal is a moot point; they don’t have the capacity to send it to U.S. territory. The real danger North Korea poses is to South Korea using conventional artillery. It’s doubtful that North Korea will ever attack its southern neighbor, since they would be guaranteed a swift reprisal. The Iranian establishment does not intend to attack us, nor could it ever hope to with Israel watching it. The Soviets are gone, and Putin’s grip on Russia is weakening.

There will always be dangers in the world, and there is a place for military defense, but there is no need to occupy any other nation. The United States is living in a time of peace, so let’s enjoy it.

If you want peace, vote for Ron Paul this upcoming primary election. The man is not a messiah and his policies may not be perfect. He is, however, the only genuine peace candidate in either of the two major parties.

–Michelangelo Landgrave is a junior majoring in economics. He is currently the president pro tempore of the CSUN Libertarian Club and a member of the Conservative Club. He is a Mexican immigrant to the United States.