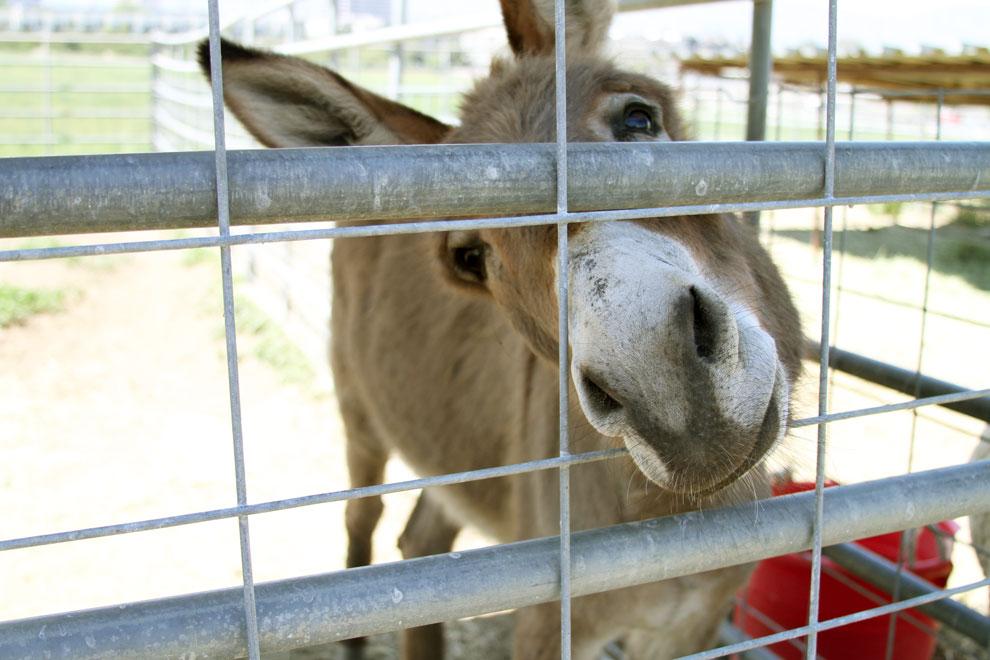 A donkey sticks his nose out of a hole in the fence at the Pierce College animal farm. Located towards the back end of the farm are some sheep and a donkey. Photo credit: Tessie Navarro / Multimedia Editor

For years, many students have chosen Pierce College because of its animal farm, which offers hands-on experience. Rashi Gupta, second-year student in the pre-veterinary medicine program, chose Pierce over other four-year universities for this very reason.

Now, the beloved farm may close after 65 years due to budget cuts.

“Two years ago, Pierce’s yearly budget was $60 million,” said Dr. Leland Shapiro, director of the pre-veterinary science program at Pierce College. “Next year, it will be $50 million.”

The farm, which focuses on directly working with animals, is the only two-year college in California that offers a pre-veterinary degree program, according to Shapiro.

“As the San Fernando Valley grew, the need for a comprehensive community college to serve the region was apparent,” Shapiro said. He added that the college was originally for male agricultural students.

Carol Kozeracki, dean of the agriculture department at Pierce, explained that as the school gradually grew, the campus transformed into a more comprehensive community college that offers a full range of transfer-oriented and career-preparation programs.

“As the job market changed, the college’s offerings evolved to ensure that we are offering students classes that prepare them for viable careers,” Kozeracki said.

The agriculture curriculum, according to Kozeracki, focuses on four main areas: pre-vet studies, a registered veterinary technician program, a horticulture program and an equestrian program.

“Graduates go on to vet school, work in veterinary hospitals and clinics as registered veterinary technicians and work as equestrian instructors, trainers and groomers,” Kozeracki said.

Currently, the animal farm costs a minimum $110,000 per year to maintain, not including labor costs, according to Shapiro.

“If we had no animals but still had to maintain the grounds, keeping it weed-free for fire safety, the fixed costs — not counting labor — would still be more than $50,000 per year,” Shapiro said.

In addition to being in the pre-veterinary program, Gupta is president of the pre-vet club, which is open to anyone interested in working with animals and provides a way for students to learn about animals outside the of the normal classroom.

“We stress the need for veterinary students to gain experience with all species of animals, despite what field they have their mind set on,” Gupta said. “Throughout the semester, we hold workshops where we teach students different aspects of veterinary medicine.”

In addition to holding these workshops, the pre-vet club helps the agricultural department sponsor the FarmWalk, an event where thousands of people come to see the animals. This year, the FarmWalk will also serve as a fundraiser to help support the animal farm and keep it open, amidst threats of closure.

The FarmWalk is one of many events that provides financial support to cover the costs of feeding and caring for the animals, Kozeracki said.

“FarmWalk is our department’s open house on April 22,” she explained. “The farm and our agriculture program are strongly supported by our neighboring community.”

Gupta knows the farm is in a dire situation, and in need of money.

“Without the budget from the school, we would not be able to keep our farm,” she said. “All the money earned from any fundraising event is going directly to the farm.”

If the farm were to be shut down, it would be a grave loss  not only to the community but also pre-veterinary students looking for hands-on experience, according to Gupta.

“Without the animals and the farm, Pierce becomes simply another campus with parking lots and buildings and the rush of getting to and from class,” Shapiro said. “The pre-vet program becomes just like UCLA’s or USC’s, classes in the sciences with no hands-on experience.”

Shapiro noted that the horse unit and most of the livestock areas are in danger. In addition to the farm, there are other programs facing closure.

“The job center is being forced out and there is a rumor that the child care center will need to close,” Shapiro said. “Music, art and PE are always threatened because many do not see the value in these fields.”