Softball: CSUN looks for hot hitting to continue in SLO 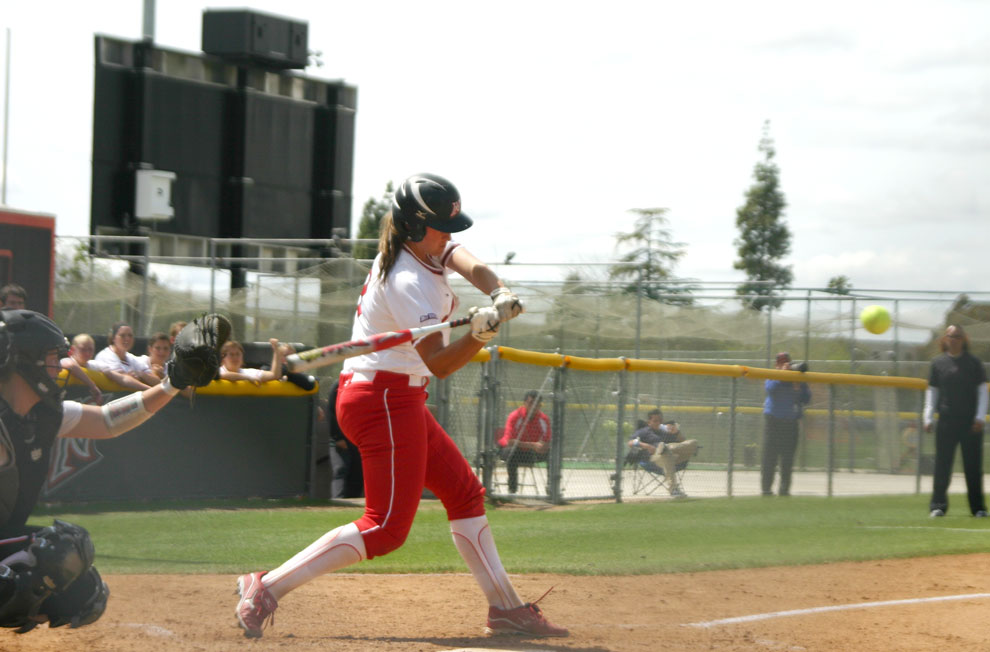 CSUN catcher Mikayla Thielges gets ready to swing at a ball in a game against Oregon State on March 28. Thielges and the Matadors will head to San Luis Obispo to face Cal Poly in a three-game series this weekend. Photo credit: Yoko Maegawa / Contributor

A struggling offense for most of 2012, the Matadors broke out of a four-game slump that had seen them score only a single run in the stretch in the second game of a Sunday doubleheader.

Facing New Mexico for the second time in the afternoon at Matador Diamond, CSUN put up 10 runs on a season-high 13 hits, a far cry from its almost-scoreless stint which included getting complete shut out by UC Davis during a three-game home series earlier in the week.

“We know we’re a good hitting team, sometimes we put too much pressure on ourselves,” CSUN head coach Tairia Flowers said after the game.

Flowers hopes the level of pressure is just right for her team this weekend, when the Matadors (7-29, 2-4 Big West) travel to San Luis Obispo for a three-game series against Cal Poly, another Big West Conference team that’s also had a handful of rough offensive patches this season.

While the offensive explosion against the Lobos was a sight for CSUN’s sore eyes, the game also highlighted that even a great offense can prove insufficient when the defense doesn’t hold up.

The 10 runs were a season-most for CSUN, but they all went for naught as the Matadors couldn’t slow the Lobos down and lost 12-10 for their fifth consecutive loss.

Given, New Mexico was the team with the most home runs in 2012 coming into the weekend – and they put up five more in two games against CSUN to up its total to 64 – but the Matadors gave up an perturbing 14 hits, spoiling an otherwise inspired effort by the home team.

“(The Lobos) are a great offense,” said CSUN outfielder Mia Pagano, who had three hits and four RBI in the loss. “We’re not used to seeing such big hitters.”

CSUN starting pitcher Alexa Limon was chased in the fourth after giving up 10 of the hits. Reliever Crytal Maas couldn’t keep the Lobos in check either, giving way to Brianna Elder to finish the game.

By the end of the game, CSUN had allowed the second-most hits it’s given up all year. Still, Flowers didn’t feel the Matadors did poorly against the potent New Mexico bats.

“I don’t think anybody (from the pitching staff) was 100 percent, but I don’t know that I’d say they struggled,” Flowers said.

Starting with a doubleaheader Saturday, the Matador pitchers – who have a combined ERA of 5.32 – will get another chance against Cal Poly’s milder offense that’s batting .237 for the year. The Mustangs, however, are also coming off a positive offensive outing after defeating Fresno State on the road, 4-3, Monday.

Cal Poly had eight hits in the win, its first at Fresno State in 17 years.

Boosted by their impressive offensive output against the Lobos, which included a late rally with four runs in the final inning, the Matadors hope they will be the ones who’ll continaue to put up runs. Not the Mustangs.

“We’re the team that fights at the end. It was nice to see four runs up there,” Pagano said of the seventh inning against New Mexico. “It wasn’t enough, but we’ll get it next time.”