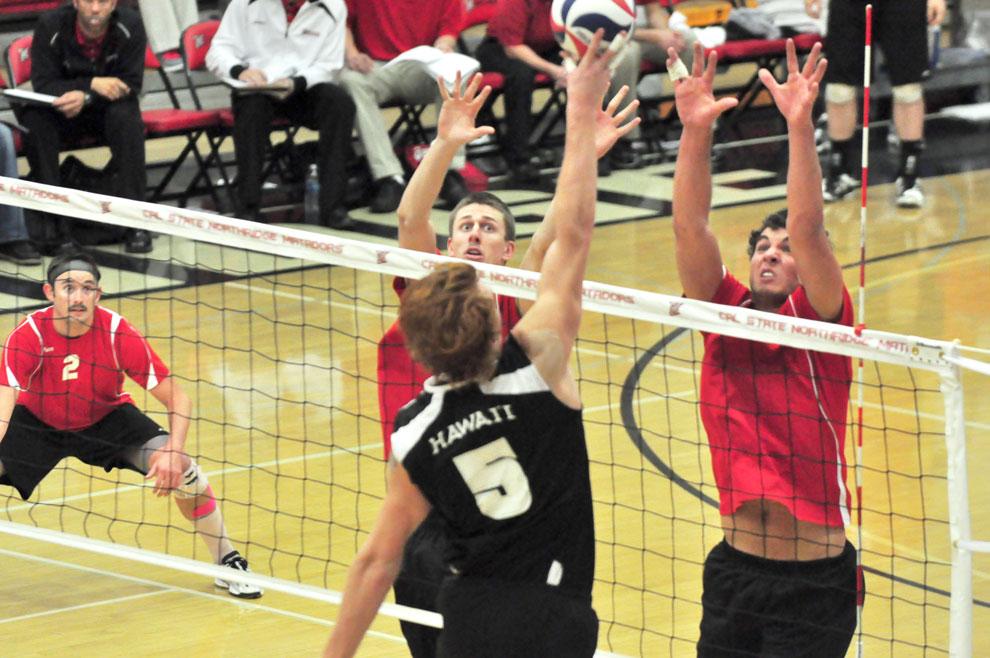 CSUN middle blocker Jared Moore and opposite Julius Hoefer attempt to block Hawai’i’s Steven Hunt during a game on March 23. The Matadors need a win to clinch the last playoff spot in the MPSF. Photo Credit: Tessie Navarro / Multimedia Editor

After dropping two of three games over the break, CSUN holds a slim lead for eighth place over UC San Diego with only two matches left in the regular season.

Saturday the Matadors (11-15, 7-12 MPSF) dropped a five-set thriller at Stanford, nearly coming back from a two-set deficit but falling short in the fifth and decisive set, 19-17.

“I think we realized that everyone is replaceable on this team,” CSUN freshman standout Julius Hoefer said. “(Opposite) John Baker came in for me and he did a great job in that game.”

Hoefer had one of his worst games as a Matador hitting .148 and only managing eight kills. Baker had 20 kills and hit .457 in place of the freshman and can prove to be a valuable asset in these final games.

“I just brought fire,” Baker said. “Everything was going their way…Being loud and being vocal, we were able to steal the momentum from them.”

Had the Matadors taken the win from the Cardinal, they would have put themselves in great position to claim the last seed available for the playoffs.

CSUN dropped the first set at Stanford despite hitting .400 as a team. The Cardinal offense put up a .444 hitting percentage in the opening set and bested the Matadors before taking the second set behind more solid hitting.

The Matadors answered back in the third and fourth with solid hitting from sophomore Brandon Lebrock. Both sets were close but CSUN managed to extend the match with a pair of 25-22 wins.

Lebrock led the Matadors’ offense with 21 kills against Stanford, but insists nothing has changed in his gameplan.

Both teams hit well in the fifth set, but Stanford managed to put the Matadors away in extra points, 19-17.

In CSUN’s previous match, the Matadors pulled off a five-set win at Pacific, keeping themselves ahead in the conference standings and in the playoff picture.

Against the Tigers, Hoefer swung his way to 26 kills on .373 hitting while Lebrock added 15 kills on 43 swings.

The Matadors opened at Pacific with a first-set loss, but battled back to take the following two sets before the Tigers stole the fourth.

Both teams exchanged points in the fifth set, but the Matadors pulled ahead in the end, 15-13, to take the match.

“Hopefully we get a lot of people out to those games,” Lebrock said. “We’re in eighth now and playoffs look pretty good for us, but they’re not a for sure. One win will clinch playoffs for us.”

In the last match between CSUN and Pepperdine, the Matadors fell 3-1 at Malibu.

“We’re just going to focus on blocking Maurice,” Lebrock said referring to Pepperdine opposite Maurice Torres. “If we can stop him, then we’re in pretty good shape.”

Torres leads the Waves in kills and put up 16 against CSUN in their first meeting.

Against USC in one of the Matadors’ earlier conference matches, CSUN was embarrassed at the Galen Center in a straight-set loss to the current No. 1 seed in the MPSF.

If the standings stay the same as they are now, the Trojans and Matadors’ match on Saturday will be a preview of the battle that will ensue in the first round of the playoffs.

“Early in the year, compared to late in the year, is a big difference,” Baker said. “We really didn’t know what kind of team we were and we’ve slowly all come into our places … It will be a great two games.”