Faculty across 23 CSU campuses vote to go on strike 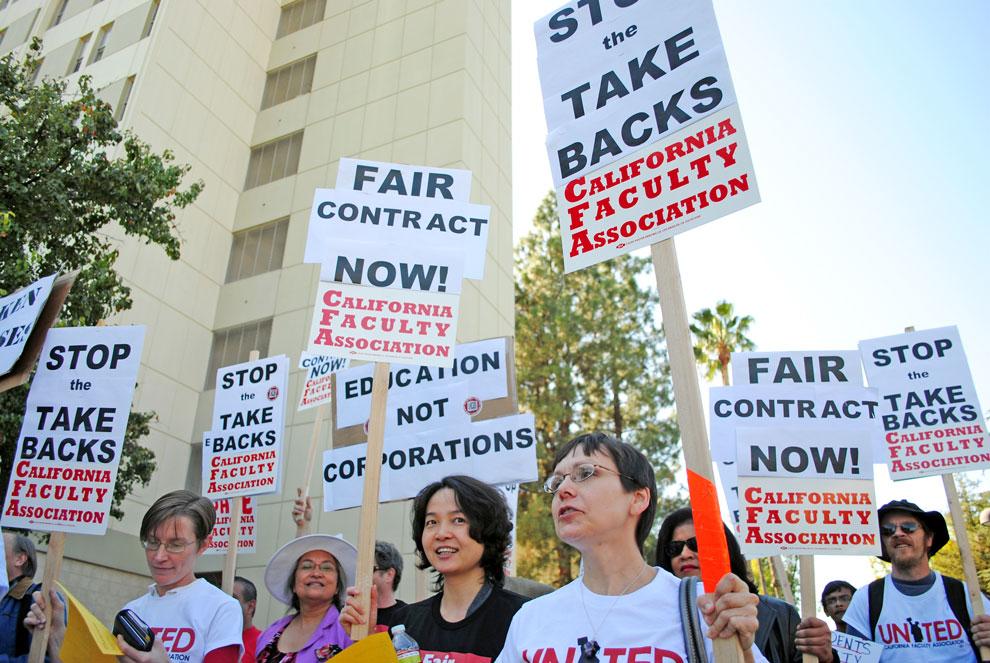 Faculty and students participating during the CFA informational pickett at CSUN on Nov. 8, 2011. Sundial File Photo

Faculty across all 23 CSU campuses will start voting next week to determine if the California Faculty Association (CFA) should organize a statewide strike.

Voting starts April 16, and will continue for two weeks until April 27. In addition to online polls, some campuses will host in-person voting stations.

“This would be the largest university strike in the history of the state and probably the nation,” said Lillian Taiz, president of the CFA. Taiz, also a professor of history at CSULA, made her remarks at a teleconference Wednesday.

If faculty votes in favor of a strike, work stoppages would take the form of two-day “rolling strikes,” with faculty at each CSU campus striking on different days, Taiz said.
“We don’t believe there will be tremendous impact on students,” Taiz said. “There are ways faculty can allow students to make up the work they have missed. In fact, it is a teachable moment. We are standing up for students, faculty, and the well-being of the system.”

The most recent contract for CSU faculty expired in June 2010. Negotiations for a new one, which have lasted 22 months, have not resulted in an agreement.

The CFA claims its demands are modest. “We asked for, and were refused by the administration, to continue the same contract from 2007,” said CFA Vice-president and CSU East Bay professor Kim Geron. “Right now, departments decide if they want to have additional faculty and the proposal on the table is the campus president can decide if the long term lecturers should stay.”

But a CSU fact sheet claims that the CFA’s proposals would cost the CSU system a minimum of $504.1 million more over the life of the agreement in salaries, tenure track hiring and more.

The CSU proposal includes provisions to maintain salaries at current levels, allow for both peer and student evaluations of faculty, and decrease compensation for faculty teaching low-enrolled summer courses.

“Faculty working conditions are student learning conditions. If classes are so overcrowded that students don’t get the attention they need it really affects the students as well. It is better for students to know that they have a stable faculty that will be there for them year after year,” Taiz said.