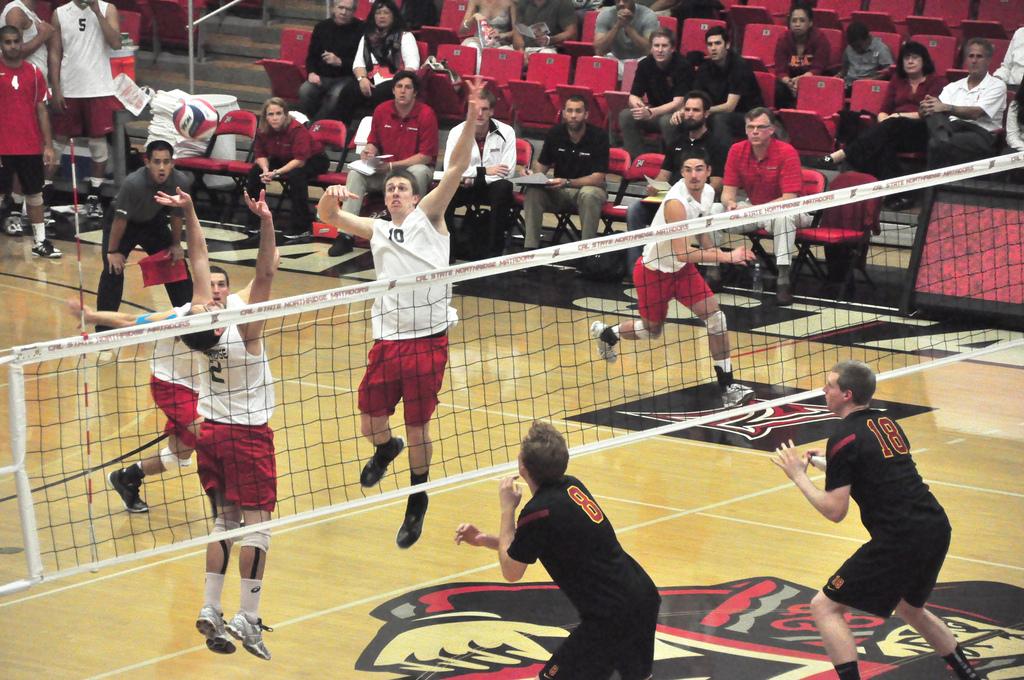 With the win, the Trojans wrapped up the first seed in the tournament and will face the eighth seed: the Matadors.

The first-round game will be played at USC Saturday.

“We’re going to have to play harder heading into Saturday night,” CSUN sophomore Brandon Lebrock said. “We kind of took tonight off knowing that we’re already in the playoffs … tonight’s final results should have been a little closer.”

The Matadors had already clinched the eighth and final playoff’s spot Thursday with a 3-1 upset win over Pepperdine.

Against USC, Northridge struggled offensively to get by the Trojan middle blockers and fell without much resistance in three sets.

“We needed to get better, but clearly that was a very uninspired performance by us,” CSUN head coach Jeff Campbell said. “Sometimes, you just don’t have it and tonight we just didn’t have it … I think we had a little hangover from Thursday.”

USC hit .425 on the night while CSUN managed a .247 hitting percentage.

“We didn’t block their best player (Tony Ciarelli) very well,” Campbell said. “We have to pick and choose who we’re going to stop and we just didn’t do a very good job at that at all.”

The Matadors were led by junior John Baker’s 11 kills while Lebrock added 10.

CSUN couldn’t figure out how to dig itself out of an early deficit in the first set while the USC blockers proved troublesome for Matadors’ hitters.

USC built its largest lead of the frame, 19-12, after a Lebrock hitting error, but a pair of aces from opposite Julius Hoefer brought the CSUN fans to life and put the Matadors right back into the match as the Trojans took their first timeout of the evening.

CSUN managed to pull within four, but the Trojan offense continued its overpowering performance and took the set, 25-19, with a .464 team hitting percentage.

Both teams exchanged points in the second frame, but the USC offense continued to give the Trojans the advantage.

The Trojans struggled finding a way to slow down Baker and Lebrock, who helped CSUN even the set up on multiple occasions and even forced extra points.

USC settled down in the last points and closed out the second, 28-26.

“We came out firing in the second set,” Lebrock said. “We missed a lot of serves in Game 2 … I feel like we just gave up after that.”

USC continued flexing its offensive power in the third with a 7-2 run that put itself up 18-12.

The Trojans didn’t look back and, after Ciarelli put down his 19th kill of the night, took the set 25-17

Ciarelli led all players in kills and hit an astounding .818 in the win.

On Thursday, Lebrock and Baker led the way against Pepperdine and combined to gather 21 and 10 kills, respectively.

CSUN had lost the first meeting between the teams but managed to split the first two sets before taking the following two and clinching its spot in the MPSF playoffs.

As a team, the Matadors put together a .300 hitting percentage and held the Waves to a .198 percentage.

The -.250 hitting percentage from Hoefer against the Waves marked the second time in a row that the freshman had struggled to get started offensively. Hoefer only had two kills on the night despite averaging nearly three kills a set throughout the year.

The play of Hoefer will be key for CSUN heading into the playoffs while libero Charlie Condron sounded confident when talking about his team’s chances at taking down the No. 1 seed.

“Physically, we can beat that team easily,” Condron said. “It’s all going to be mental.”